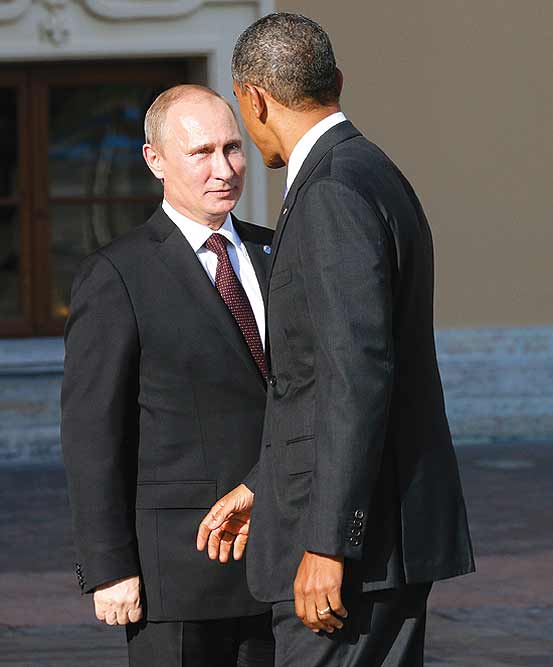 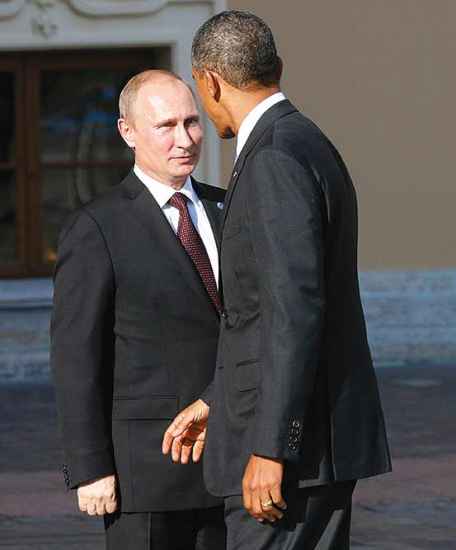 Talking At Each Other

The possibility of military conflict over Ukraine may have receded—at least for the moment—but the sparring between Russia and the US over events in the Crimean peninsula has once again brought to the forefront the spectre of the Cold War.

The high-voltage drama dominating international politics for the past few weeks ended in a bit of an anti-climax on Tuesday. Despite a lot of muscle-flexing in the form of troop mobilisation, Russia decided on a step back. The brinkmanship between Vladimir Putin and Barack Obama over Ukraine ended on March 4, when the Russian president ordered his soldiers to return to their barracks in Crimea following calls of restraint from the European Union and threats of sanctions and “other consequences” from the US. However, ‘pro-Russian’ soldiers continued to keep Ukrainian troops hemmed in their Crimean barracks, and warships in Sevastopol continued their blockade of Ukraine’s vessels. More significantly, on March 6, the Crimean parliament declared its intention of being a part of Russia, and has asked citizens to vote on the issue in a referendum on March 16.

“Memories of the Cold War loom large over the Ukraine crisis. Russia and the West are in the midst of a struggle.”
Andrew Foxall, Henry Jackson Society, UK

Despite a lowering of tension, Putin, flush with the recent success of the Sochi Winter Olympics, came out with an ominous reminder that “armed intervention should be the last resort”. It indicates  he is not taking his eyes off the Ukr­ainian ball. Many believe that before long the confrontation over Ukraine would ratchet up again—one of the few countries that Moscow is desperate to stop going over to the Wes­tern camp. Much of the brinkmanship between Russia and the US, inte­re­st­ingly, is being played out at a time when historians, like Niall Fergu­sson, are lamenting over “the retreat of the US from global affairs”; while others are deb­ating the return of a “new cold war”.

As Andrew Foxall of the Henry Jackson Society, a UK thinktank, says, “Mem­ories of the Cold War loom large over the current situation in Ukraine. Russia and the West are certainly in the midst of a struggle.” Richard Fontaine of Washington’s New Ame­rican Security adds, “We are entering a new phase of relations with Russia, one that promises to be more difficult and  confrontational.” 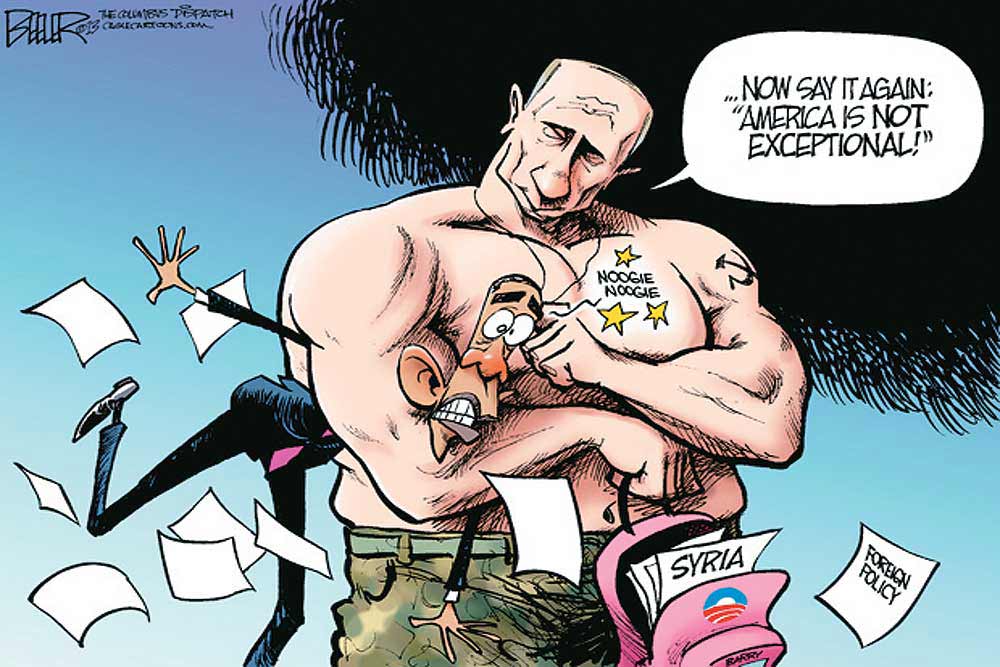 Opinions in the West differ on Putin’s reaction to the Ukraine crisis after the ‘pro-Russia’ regime in Kiev was toppled by popular street protests. Some argue that the Russian president—whose popularity rating back home has gone down from 83 to 54 per cent in recent months—is trying to shore up his image by standing up to the bullying West in general and the US in particular. Others argue that Ukraine is ‘too important’ an asset for Russians to let go of. The Crimean peninsula has an overwhelming presence of ethnic Russians who have strong links with Moscow. Besides, Russia’s Black Sea fleet is stationed at Sevastopol.

“The way the US has responded has told Putin that it is willing to play ball...and not take a firm stand.”
Steven Bucci, Heritage Foundation, US

“Since the mid-1990s, Russians have come to accept Ukraine as a separate state, but still did not consider it a foreign one,” writes Dmitri Trenin of Moscow’s Carnegie Endowment in his book post-Imperium: An Eurasian Story. He adds, “In the elite, and to some extent also popular, mind, Kiev remained ‘the mother of Russian cities’.”

As Yanukovych’s ouster shows, many Ukrainians are keen to break the Russian stranglehold over the country and join the EU. This has been a desire that has often come to the fore since the 2005 ‘Orange Revolution’—seen by Kremlin as a CIA plot to challenge Russian influe­nce.

Since some nations that were part of the erstwhile Soviet Union not only joined the European Union but also the NATO at the end of the Cold War, Russia is determined not to allow Ukraine to follow the same path. It fears that if the Americans manage to expand their influence up to its doorstep, it may destabilise the government in Moscow. 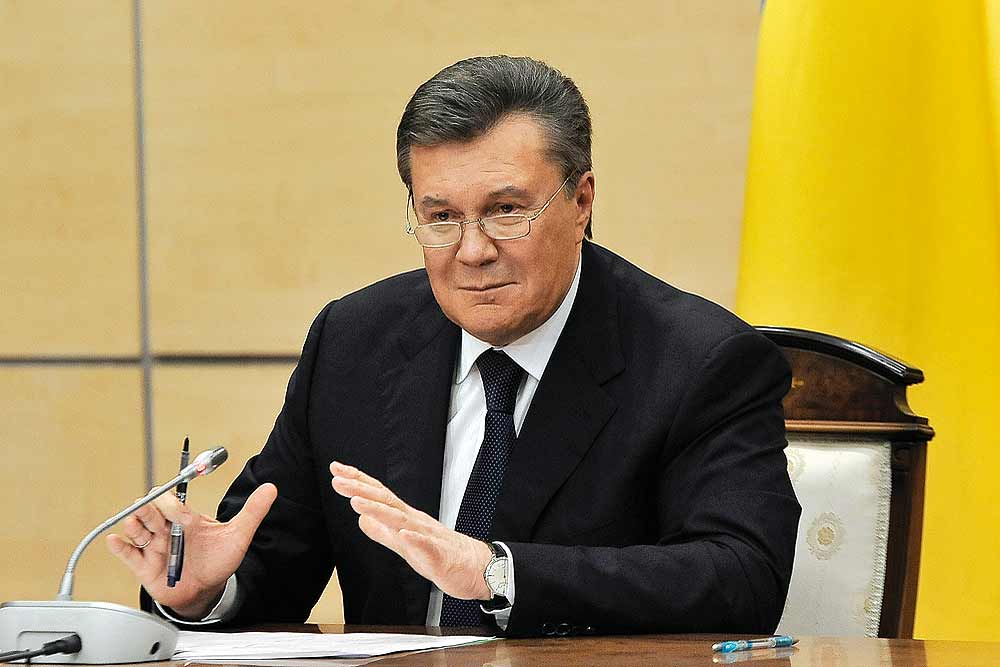 As Yanukovych’s ouster shows, many Ukrainians are keen to break the Russian half-Nelson and join the European Union. (Photograph by AFP, From Outlook 17 March 2014)

Indeed, Ukraine may be the latest politico-strategic chessboard where the Russia-US rivalry for influence is being played out. But the ‘new Cold War’ that many commentators see emerging has had its roots from the early 2000s. Initially, when Putin replaced Boris Yeltsin, many in the West welcomed him because he was seen as a leader who brought control and stability.

“Putin doesn’t consider Ukraine as an independent state.... He is a patriot of the Russian empire.”
Temuri Yakobashvili, German Marshall Fund, US

For a few years, there was cooperation between the two sides on a number of areas, particularly when US president George W. Bush decided to invade Afghanistan after 9/11. But the bonhomie wore off once he got into Iraq in 2003 and started pursuing policies that were seen in Moscow as an attempt by the US to isolate Russia. Its worst fears were confirmed when the US decided to put up the Missile Defence Shield in the Czech Republic and other parts of east Europe. This is still an unresolved, prickly issue that is often used by the Americans to pressurise Russia.

“The US may be turning elsewhere and becoming more isolationist, but NATO’s Missile Defence Shield is still a project that is very much alive,” says Stefan Wolff, professor of international security in the University of Birmingham.

Still, a serious effort was made by Obama to reach out to Moscow with his policy of ‘reset’ when Dmitri Medvedev was president of Russia. But relations nosedived once Putin returned to power in 2010. Since then, the two sides have sparred over issues from Libya and Iran’s nuclear programme to Syria, the Edward Snowden affair and gay rights (see box).

Obama is wont to say that US-Russia differences should not be seen as “some Cold War chessboard”. But the difference in approach between him and Putin became clear during the 90-minute telephone conversation the two recently had over Ukraine. While Obama saw the struggle in Ukraine as a case of allowing Ukrainians to exercise their right to “self-determination”, Putin saw it as Russia’s right to protect its interests.

Many commentators point out how differently the two leaders approach the Cold War between the US and the Soviet Union that ended over  two decades back. While Putin, a young KGB off­­icer in East Germany in the 1980s, thr­­ived in the prevailing atmosphere, Obama as a college student in Col­umbia University some years later, wrote a thesis arguing how the US and the USSR could negotiate to cut their nuclear arsenals.

“US may be turning elsewhere and becoming isolationist, but NATO’s Missile Defence Shield is very much alive.”
Stefan Wolff, University of Birmingham

Others put the blame squarely at Obama’s door and link much of the Russian’s assertiveness to America’s failure to match up to him. “The way the US has responded, it has told him (Putin) that the US is willing to play ball, to roll on this stuff and not take a firm stand,” says Steven Bucci of the Heritage Foundation.

However, Putin’s ‘strong man’ image is being questioned by sections in Russia and elsewhere, though there it’s undeniable that his tough stand on Ukraine helped him in boosting his domestic stocks. But his partial climbdown from the US’s initial sabre-rattling also had to do with the US’ proposed sanctions on Russia. The war hysteria that led to panic in Russia adversely affected the rouble and the central bank had to spend over $12 billion from its reserves to shore up the national currency.

“Putin is deeply nervous, and of course, Russia is weak, which only makes the situation more dangerous, requiring wise leadership in the West, which has been signally absent,” says Richard Sakwa of Kent University. He adds, “This is Obama’s Kennedy moment—will he live up to it?”

After all, having lived through the Cold War for more than five decades, there would be few who would want that phrase to gain salience once again in international affairs.