India may be safe from the new strain of H5N1 virus, but for how long? Updates 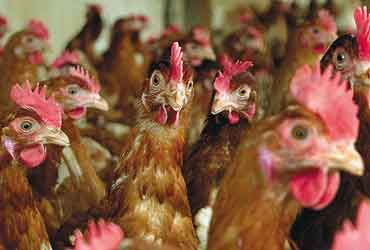 outlookindia.com
-0001-11-30T00:00:00+0553
"By the pricking of my thumbs," said the Chinese chicken to the Vietnamese duck late last year. "Something wicked this way comes." Indeed it was. Starting mid-December, Asian health authorities have unleashed a colossal cull of poultry.

In Thailand and Vietnam alone, 12 million chickens and ducks were slaughtered when symptoms of avian influenza, or bird flu, became apparent. Millions more were despatched in China, South Korea and Taiwan. Birds in Pakistan, Japan and Indonesia too are reportedly keeling over, sick.

The Indian government wasn’t slow to respond. On January 29, the Centre issued a total ban on the import of all poultry and related processed foods from all the affected countries. Concerns on infections crossing from Pakistan and other neighbouring countries kept state health authorities on alert. The bsf was asked to screen for livestock crossing the border, and Samjhauta Express passengers came in for special attention.

Public health workers have been concerned ever since deaths due to exposure to the virus were reported from Thailand and Vietnam. So far, every human bird flu infection has been zoonotic (animal-to-human) in nature. Dr K.R. Reddy, joint commissioner, poultry, says the "highly contagious" virus spreads through contact with the saliva, faeces and nasal secretions of infected birds. Fortunately, a sick person won’t infect another human in a purely zoonotic infection.

The real fear is that the virus will mutate. Even a small genetic ‘shift’ can allow the virus to spread between humans. Much like the common cold, as Dr Salim J. Habayeb, the WHO representative in India, explains. If this happens, the virus will spread fast. It may mimic the calamitous great Spanish flu of 1918-19, which killed some 40-50 million worldwide.

UN agencies agree that the "highly pathogenic" avian flu virus, spread across 10 Asian countries now, can "evolve into an efficient and dangerous human pathogen". Mass slaughter of poultry is the only defence, says Habayeb. "Till an effective vaccine is developed in the next four to six months, this is the only way to be sure."

Of particular concern is the H5N1 virus, one of 15 avian flu subtypes, which killed eight of the first 10 infected in Vietnam and Thailand. The virus was thought to affect only birds till 1997, when it ‘jumped’ the species barrier and infected 18 people in Hong Kong, killing six of them. In a bold step, its entire poultry stock, some 1.5 million chickens, was slaughtered to avert an epidemic.

But the virus is back. And the risk of a fatal mutation in H5N1 is real. Experts say historical patterns point to another super-flu outbreak. According to Dr Ashutosh Shukla, associate senior consultant at Max Health Care, flu viruses mutate in two different ways—through antigenic drifts and antigenic shifts.

"Antigenic drifts are small changes in the virus that happen over time, which produce new virus strains your body may not recognise. That’s why flu shots are updated every year," says Shukla. Even now, there are variations in the H5N1 virus strains detected in each affected country.

The ‘antigenic shift’ is deadlier, however. When abrupt, major changes occur in the influenza A virus, it results in new subtypes, against which humans have no immunity. Peter Cordingley, WHO spokesman in Manila, has warned that if H5N1 swaps genetic information with the common human flu virus, it will become far more infectious than sars.

The virus has already racked up a higher fatality rate than the 15 per cent totted up by sars. This year’s strain is also resistant to cheaper anti-viral drugs like Amantadine and Rimantadine. "Workers in poultry farms, who are at high risk, are being treated by new anti-viral drugs called Neuraminidase inhibitors like Oseltamivir and Zanimivir. But these drugs are expensive," worries Habayeb.

For now, he feels India has been lucky as far as this outbreak is concerned. "India is more or less self-sufficient in poultry, and imports very few birds compared to other Asian countries. The risk from wild birds is also being monitored throughout India," he adds.

The Indian government has issued a blanket ban on the import of domestic and wild birds. Officials like Dr Vijay Kumar Taneja, deputy director general (animal sciences), say there are no relevant human or poultry infections in India till now. "We’re closely monitoring farms in border states. In case an outbreak is suspected, samples will be sent to the High Security Animal Diseases Lab in Bhopal to be tested." He says in its present form the H5N1 virus has very little chance of spreading to India, while the H7 and H9 strains of avian flu found in Pakistan are less pathogenic and haven’t infected any humans yet.

Perhaps. And meanwhile, the government is doing what it does best. The health and family welfare ministry has set up a nine-member group under health services director general Dr S.P. Agarwal to track the spread of the virus and suggest action, if needed. Delhi’s National Institute of Communicable Diseases has been identified as the nodal agency to investigate human infections.

India’s largest producer of poultry products, Pune-based Venkateshwara Hatcheries Group, which markets chicken products under the brand name Venky’s, has chalked out its own combat plan. Two teams from its poultry diagnostic and research centre left for Punjab and Calcutta on January 26 to monitor poultry stocks in border regions.

But even as the flu rages outside India, brave-hearted local consumers should benefit from a bizarre twist to the chicken saga. Prices of chicken are expected to drop because of the flu scare.

Experts say there is no evidence that the virus is being passed through eating chicken products. Though handling an infected raw chicken could pose a threat unless you wash your hands immediately. Heat kills the virus so any chicken product cooked thoroughly at temperatures of at least 70° C (158° F) can safely be consumed. So forget runny poached eggs for a while and get used to well-done omelettes and chicken, Indian style! 4