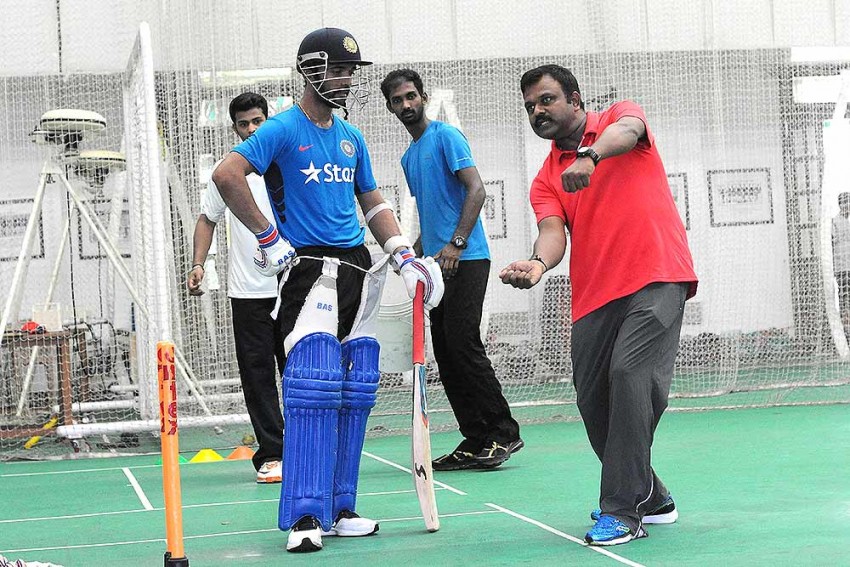 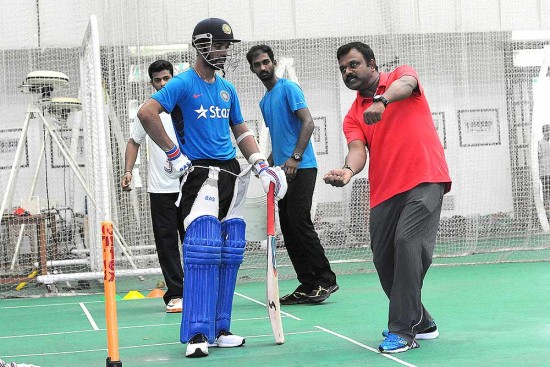 When Sourav Ganguly flew down to Australia to seek Greg Chappell’s help in ironing out batting defects in 2003, no one knew that it presaged such customised coaching—ensuring expert, personalised attention—would become a trend 14 years later. Even when England batsman Owais Shah landed in Hyderabad in 2004 to take some vital batting tips from Mohammed Azharuddin, no one foresaw that a few years later several former India players and coaches would use their vast cricketing nous in a professional manner.

Thanks to an overdose of cricket, especially with T20 format being the order of the day, players both young and experienced are increasingly turning to coaches who can attend to them exclusively. Customised coaching is the latest trend in cricket—and many who have profited from it feel it would only grow in future.

It became a trend a few years ago when India discard Robin Uthappa sent a message to Pravin Amre from Belgium, seeking one-to-one batting classes with him to resurrect his career. It gave the former India Test batsman an idea. Amre, who had guided Mumbai to three Ranji Tro­phy titles in five years as its coach (2006-2010), credits Uthappa for sowing the seeds of customised coaching in his mind.

After Amre, more former India players and qualified coaches are taking up this type of coaching. Test players like Ragh­uram Bhat, Balwinder Singh Sandhu and Kenia Jayanthilal have followed suit. First-class players Kanwaljit Singh, Sulakshan Kulkarni, Sunil Subra­man­ium, Rajdeep Kalsi and Apurva Desai, and qualified coaches like G. Jayakumar, P.V. Shashikanth and Rakesh Tiwari are treading the same path. “I feel it is the future of coaching, because the game has become fast and there is too much workload on players. Specialised coaching is a different concept and it saves time for players. So, there is a lot of scope for this type of coaching,” says Amre. Apart from Uthappa, Amre’s other famous students include Ajinkya Rahane, Dinesh Karthik and young sparks Shreyas Iyer and Naman Ojha, besides some upcoming youngsters.

A sudden glut in the volume of cricket, particularly the T20 version after the adv­ent of the IPL, and the varied demands of the three formats, say coaches, hastened the hold of customised coaching. They add that the increasing demands of the modern game require a strong mental make-up, besides a fit body, something the coaches prioritise. T20, striated with power-play and big hitting, consumes energy ravenously. Concentrated, cool strategising—say, about varied techniques for different periods of play—of the longer formats takes a backseat. If a player plays all three formats, like Virat Kohli or Bhuvneshwar Kumar, it takes a toll on the mind and body. Players must have an iron-cast mind capable of being switched on and off, besides exemplary, yo-yo compatible fitness. That is where personalised coaches come into play.

A personal coach is, however, not a solo wizard; he is a complete package. Most have full-fledged set-ups of their own, comprising a support team that provides comprehensive service to ‘clients’. The team may include a trainer, a physiotherapist, a dietician, a set of bowlers—assuming the client is a batsman—and at least 11 fielders to simulate match situations. If the coach doesn’t have a ground, his student has to rent one and bear the cost.

Such coaches come with a team and cricketers to simulate matches. Grounds are hired too.

All this, of course, costs a packet. For example, when Amre hires a ‘plot’ at Shivaji Park—the famed nursery of Mumbai cricket—for a day for coaching, it costs him Rs 15,500 a day. And when Uthappa hired the Mumbai Cricket Association’s Bandra Kurla Com­plex ground for a month for two-hour sessions daily with Amre, the ‘student’ coughed up Rs 25,000 per session, info­rms Amre,  who secured his Level-II cer­t­­ificate from South Africa and Level-III from the NCA in 2003, and took a sabbatical after 2010 to do ‘research’ on coaching.

Sandhu, who was part of the 1983 World Cup-winning Indian team, is ano­ther, though not full-time, specialised coach. He turned around the career of Baroda’s Swapnil Singh, a left-arm spi­nner and a competent batsman, when he was out of favour from 2012 to 2014. “He met me at a wedding and sought my help. At the time, he had no confidence and was nearly in depression. I helped him solve his problems. But I didn’t charge anything,” says Sandhu.

Sandhu has also worked with current Karnataka captain-cum-pacer R. Vinay Kumar and his pace bowling colleague Abhimanyu Mithun in short stints and, as Baroda coach, with Zaheer Khan when he was out of the Indian team. “I try to get into the mind and body of players to understand them, and then tell them what they can do and what they can’t,” says Sandhu, who has coached at the BCCI’s National Cricket Academy (NCA) in Bangalore.

The coaching bug has bitten Amol Muzumdar, a former Ranji Trophy-winning Mumbai captain, too. He secured his Level-III certificate from Australia and is often invited to coach at the NCA. Unlike others, Muzumdar has imparted personalised attention to a few foreigners as well. “Cricket is now a highly-paid profession. And there are huge options for youngsters today outside of cricket as well. So, personalised coaching is helpful,” says the batsman who holds the record of the highest score on first-class debut (260 vs Haryana in Faridabad in 1994).

But doesn’t it lead to conflict of interest if you can influence the selection of a player you are coaching? Former India left-arm spinner Raghuram Bhat faced such a charge—he is chairman of Karnataka’s senior selection committee and coaches “individually” at Brijesh Patel’s academy in Bangalore. “The BCCI has cleared me of the conflict of interest charge. I coach only junior cricketers till they are 19. If I had been coaching seniors it would have been a conflict of interest,” he says. Amre says he is also in the clear. “I am a managing committee member of the Mumbai Cricket Association, and I don’t do any coaching for Mumbai or the BCCI. And I don’t have any contract either,” he says.

Former wicket-keeper-batsman Sula­kshan Kulkarni, who was Mumbai coach from 2011 to 2014, has provided personal coaching since 2012—he does it full-time now—with Thane as his base. “You can devote quality time on an individual in this type of coaching. Seven sessions, for instance, could be very vital for a player,” he emphasises. Parents, he says, are up for a great deal of sacrifice. “The parents of 10-and-a-half-year-old Tejas More have relocated from Delhi to Thane so that their son gets personalised coaching from me, and have admitted him in a local school,” he says.

Among Kulkarni’s more famous pup­ils is Vidarbha middle-order bats­­man Apoorv Wankhade, who scored his maiden first-class century against Kerala in the Ranji Trophy quarter-finals last week to ensure his team’s win and entry into semi-finals. “In 2015, when he was out of the Vidarbha Ranji team [from 2014 to 2017], he told me that they had categorised him as a limited overs specialist batsman and that he wanted to play in Ranji. I told him to change his mindset and to work on his technique. In many subsequent matches, he remained unbeaten,” he says.

Former Punjab batsman Rajdeep Kalsi, who runs a 24-bed resident cricket school in Mohali district, feels specialised coaching is here to stay. “Like in tennis, cricketers pay for personal coaches. This is the ‘in’ thing, cricket’s future,” he is sure. Rakesh Tiwari, a former Services player and coach, is a travelling specialist coach. Besides taking classes in his home city of Kanpur, he travels to Calcutta and Mumbai to holds stints lasting seven to 10 days. Parents seeking coaching for their kids have to arrange the ground, besides, of course, his fee. “Personalised coaching is like school students taking tuition. Since the competition is very tough now, you need perfection and that will come only when you face 200 deliveries or play 200 cover drives in a day. Largely, this type of coaching is the outcome of the IPL,” Tiwari stresses.

It is, however, possible that the claim of G. Jayakumar, the personal coach of India opener Murali Vijay and briefly of R. Ashwin, that he started personalised coaching in 2003, is true, though as an employee of Chemplast in Chennai he only coached the company’s players. His students included Vijay, S. Badrinath, Dinesh Karthik and Kerala’s Sanju Sam­son. “When I started individual coaching in 2003, people were sarcastic, because they were sceptical about the outcome of the concept,” he recalls with a chuckle.

Jayakumar, who works only with batsmen, says individual coaching involved two aspects: technical and marketing/com­mercial. “The technical part compri­ses your dedication towards different ind­ividuals, while marketing involves the commercial aspect. If there is a new product, people will obviously sell it. Both ways, this type of coaching is important. If it keeps growing, then in the next 20 years we may see something very different,” he says. Kanwaljit, a brilliant off-spinner who was unlucky not to represent the senior national team, says coaches also have to deal with parents’ expectations. “Parents are smart; they 200 per cent expect the coaches to help in their wards’ selection in various teams. But I tell them beforehand to not to expect that from me,” he says.

The concept of customised coaching has caught on, and it’s probable that would-be coaches would choose it over official positions and assignments. The satisfaction in moulding a young cricketer according to one’s plan is immense; so are the rewards.

Other Men Behind The Champs This legendary athletics coach famously spotted P.T. Usha in 1976 and coached her. Dronacharya awardee in 1985. A national billiards and snooker champion, he held world records for the biggest breaks in both. Coached Pankaj Advani. The Immigrants And The Islamists