Narendra Modi’s change of heart was not entirely convincing: to his colleagues, the Sangh or Muslims 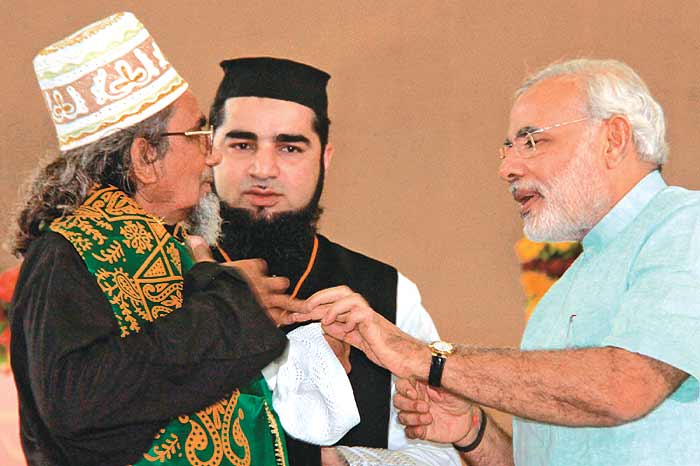 Fast In A Snapshot

Twenty days before he completes a decade as the chief minister of Gujarat, and on the occasion of his birthday, Narendra Modi decided to emerge a new man. The Supreme Court ‘reprieve’ in one of the 2002 Gujarat riots cases just five days before came at the perfect moment for his reincarnation. There would be no apology for the riots, but he would fast for peace. Hence his three-day ‘sadbhavana mission’.

Loaded with the twin purpose of an image makeover and self-projection as a serious claimant to the centrestage of national politics, this was Modi’s attempt to appear “inclusive, secular and pro-development”. Many saw it as Modi trying to do an Advani, that is, a belated course correction. Six years earlier, the senior BJP leader had attempted to redeem himself by calling Jinnah secular while visiting his birthplace in Karachi. Circa 2011, Modi chose his home ground, Gujarat, as his road to redemption. And though his party colleagues in Delhi had reservations about his prime ministerial ambitions, they could not afford not to show their solidarity with Modi’s sadbhavana cause.

Not everyone, however, bought Modi’s change of heart. Many dismissed the fast as a PR exercise. It created a sense of unease among senior BJP leaders who are wary of Modi, and left local party leaders confused. The RSS and the larger Sangh parivar were cut up that they were not even consulted before Modi finalised his sadbhavana programme. The average Muslim, who has been denied justice, remains suspicious of Modi’s sudden secular overtures. Modi might have drafted the perfect script, but things didn’t quite go according to it.

“It’s status quo for him,” says a senior BJP leader. “If he hasn’t really lost anything by this secular projection, he hasn’t gained much either.” Party insiders were in no doubt about Modi’s intent: to project a secular image for acceptance by a national audience and then a pitch for the prime ministerial job in 2014. “This explains the presence of Muslims who were persuaded to come to the venue. With the reprieve from the Supreme Court, which ruled that it would no longer monitor the case filed by the widow of slain Congress MP Ehsan Jafri, Modi thought it was the right moment,” says a BJP leader.

The Muslim presence in Modi’s sadbhavana mission was indeed hard to miss. The ground had been laid ahead of the fast when advertisements were placed in Urdu dailies in Uttar Pradesh and Bihar: “Aapko mera salaam. Aapki tamannaon ke bal par main aaj se sadbhavana mission ke saath roza upvas ko aagah kar raha hoon (Keeping your desires in mind, today I am embarking on a roza fast with this mission)”.

As the fast progressed, young and old Muslims, men in skullcaps and women in burkhas, trooped up on the stage to meet Modi. Maulvis and Sufi saints marked their presence too. Former deputy municipal commissioner Z.A. Sacha added a touch of fancy dress to the pro-minority show, as he landed on the stage dressed as an Arab! Cries of Allah-o-Akbar reverberated on the first day at the convention centre of Gujarat University where the fast was held.

“He’s wooing Muslims even as he ensures that not even central welfare schemes reach them.”

All of this left the RSS a little bemused. “The Sangh wasn’t even consulted before this fast was announced,” said a senior pracharak. Insiders say Modi took just a handful of advisors into confidence. When the Sangh learned of the decision, it even sent a message to Modi that a celebration of the SC verdict was not required right now and that he should wait for the trial court’s decision. Not only did Modi ignore this and go ahead with the fast, he even went all out to lay it down thick with the Muslim presence. Perhaps the Sangh was reassured only when Modi’s Muslim sadbhavana drew a line at wearing a skullcap offered by a cleric.

This aberration in sadbhavana apart, Modi’s outreach to the Muslim left the BJP worker at the grassroots level confused. As a Gujarat BJP leader put it, “Modi invites Muslims in huge numbers to his programme to show that he is secular. The worker is confused. He doesn’t know what to make of the pro-Hindu image of the last 10 years that we have worked hard on. The Muslims in Gujarat will never vote for the BJP and Modi. The CM knows that. Narendrabhai has taken the gamble with his eye on the 2014 Lok Sabha polls and prime ministership.”

However, neither the BJP leadership in New Delhi nor the RSS is ready to acknowledge Modi as a national leader. Nitin Gadkari’s line that the BJP will not have any pre-poll prime ministerial candidate in 2014 is actually the RSS line. Modi has over the last 10 years carefully and calculatedly finished the entire RSS and VHP in Gujarat. The fear is that he would do the same to the Sangh and the party if he came to New Delhi. 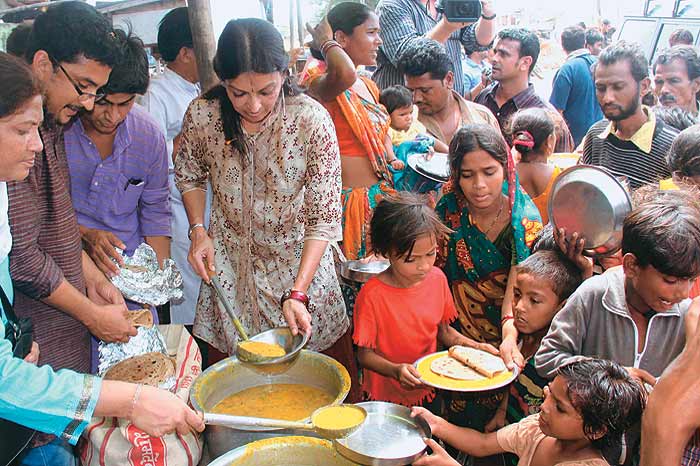 Not so fast Mallika Sarabhai feeds the poor to Modi’s fast. (Photograph by Jitender Gupta)

And New Delhi was very much on Modi’s mind and words through his mission. Over the three days of his fast, he had third-rung leaders rally for him as the best candidate for the prime minister’s job. He put a final stamp on this intention in his speech on the last day of his fast when he said that he could give a vision to the nation just as he had done for Gujarat.

Interestingly, senior leaders—L.K. Advani, Sushma Swaraj and Arun Jaitley—did not even once mention a national role for Modi in their speeches at Ahmedabad. Advani began by saying, “I did not want to speak at this function. I told Modi that you should speak, not me. But he told me I must say a few words.” The point delivered subtly, Advani credited Modi for praise from the US Congressional Research Service in its latest report (see interview). Even Sushma Swaraj hinted in her eulogy for Modi that the good work be confined to Gujarat. “Narendrabhai,” she said, “you keep at your work. All of us are with you. The whole of Gujarat is with you.” The wedge within the party over the top job is all too visible. The self-projection also precipitated the question of Modi’s acceptance within the NDA. Bihar chief minister Nitish Kumar was rather terse, saying he didn’t have to “comment on each and every fast by the BJP”, that the JD(U) alliance with the BJP didn’t extend to Gujarat, and that they would respond to the BJP’s PM candidate “only when they announce it”.

But whether or not sadbhavana mission helps Modi emerge as BJP’s prime ministerial candidate, has it at least served to change the communal perception of him? The tentativeness of Modi’s Muslim affection remains a cause for concern. “For 10 years,” says social activist Hanif Lakdawala, “Hindus thought he stood by them. Now, he is wooing Muslims even as he ensures that not even central welfare schemes for Muslims get implemented in Gujarat. This sadbhavana mission was a tamasha. And Muslims are not taking kindly to his obvious returning of the skullcap that the Imam of Prara offered him.”

“The propaganda was powerful, but not successful,” says political commentator Achyut Yagnik. “It was a political gimmick. The presence of Muslims at the convention centre had little impact on the politics of the state. After all, the Muslims who attended the programme were primarily Khojas, Memons and Bohras—all mercantile Muslim communities who have tended to be Modi supporters. But the detention of the riot victims in Naroda Patiya on the second day of the fast dented the secular image that Modi was trying to build. It brought back the focus on the riot victims of 2002.”

It was this detention that was the undoing of sadbhavana in Modi’s mission. Barely 30 hours into his fast for unity, Modi’s extra-cautious state machinery rounded off and detained riot victims, eager to present an open letter to the CM. This prompted activist Mallika Sarabhai to remark that “it’s not sadbhavana but ‘sad’ bhavana on Modi’s part”. At the end of the day, Modi did get a lot of media attention. But his secular debut was not entirely convincing. Perhaps he needs to do a lot more than go on fasts and deliver pretty speeches if he has to reach out to Muslims in Gujarat and the rest of the country.