Another rape in broad daylight, and fear grips capital's campuses 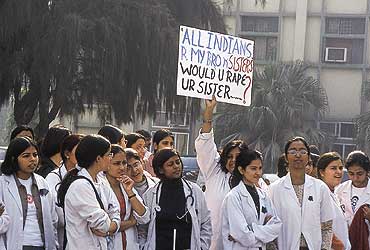 The 21-year-old girl, a fourth-year MBBS student of Maulana Azad Medical College (MAMC), was on her way home from college. It was a bright 2.15 in the afternoon, and she was on Bahadur Shah Zafar Marg, a street that houses some of the country's most powerful newspaper offices, and is a stone's throw away from the city's police headquarters.

But these weren't deterrents enough for her assailants—one in his early 20s, and the other two mere adolescents, about 14 to 15 years of age. They dragged the girl into an unkempt, centuries-old monument, Khooni Darwaza, situated on the road's broad divider. And it was on the crumbly terrace of this monument that the older among the three, with "Rahul" tattooed on his arms, reportedly raped the victim, while the other two held her hostage to a knife, and looked on.