Citizen Of The World 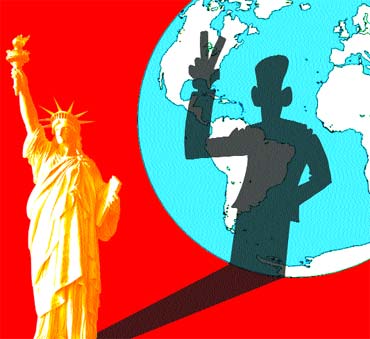 It is true that during the long and gruelling election campaign, Barack Obama had to play down his race, explain that his middle name was a legacy handed down to him with no religious significance at all and, in recent months in his speeches and pronouncements, drift gently away from the left. But this does not take away anything from the historic nature of the moment, nor from being a tribute to the American people for voting the way they did.

The American presidential ballot is the most important election on earth, since it has the potential of affecting the welfare of all human beings. That only 5.1 per cent of the world's adult population—that is, the US citizenry—has franchise in this election does not speak well of global democracy. With economic globalisation, whereby one nation's policies can affect the well-being of another nation, unless we all have a say in the elections of the most powerful nations, global democracy will tend to be sidelined, giving rise to dissent and insurgency. What gives rise to hope is that the outcome of at least this election would have been no different if the whole world was allowed to vote.

The excitement of the event was palpable in the evening of November 4 in the home of Isaac and Miriam Kramnick, where an open house was held to await the election results over a spread of potluck dinner. The guests, mainly Cornell academics and some writers and activist-lawyers, were all Democrats. Isaac is the author, with Larry Moore, of The Godless Constitution, an elegant argument for keeping religion out of the State. Miriam is the biographer of one of the world's early feminists, Mary Wollstonecraft. That the guests would be partisan is not surprising. But even otherwise, if one polled all professors of America's leading universities, the support for Obama would be found to be near-total.

As the first results came in, McCain was in the lead, causing nail-biting tension at our dinner. I remembered the apocryphal story of the British Tory hack in the 1970s who ran out of the counting station and announced, "The first vote has been counted. It has gone to the Conservative party. If this trend continues, we will have a landslide victory." Fortunately, in this case, the trend did not continue and two hours after the closing of the polls it was evident that Obama was in. Cornell's ex-president, Hunter Rawlings, risked his patrician reputation, and danced a quick jig. And I, even though not an American citizen and thus without a vote, could have done the same.

The conservative media had warned repeatedly that Obama is more radical than he appeared on the election trail. They are right. What he actually does, however, will not be too radical, given the constraints of his position. He will tax the rich more and subsidise the poor. He had opposed the invasion of Iraq and will pull American troops out. He will reverse the shameful legacy of Dick Cheney that lowered the standards of treatment of enemy prisoners and redrew the line of what constitutes torture.

These will be achievement enough, but more important than these could be the shift in global thinking and culture that Obama's victory could bring about. There was one noticeable difference between Obama and McCain. Obama's speeches had much fewer references to patriotism and the glorification of the American identity. Since strident patriotism is, in the end, no different from racism or casteism, I am glad he refused to play to the gallery. Obama's repeated reference was to the poor and the dispossessed, no matter where they were located.

I am also glad that Obama spoke about redistributing wealth. I do not think he will be able to do much in this area, but if such a call from an American president causes a shift in public opinion, that could well clear the way for a more equitable and better world.

'More Has Been Read Into Kashmir Mediation Than Obama Intended'