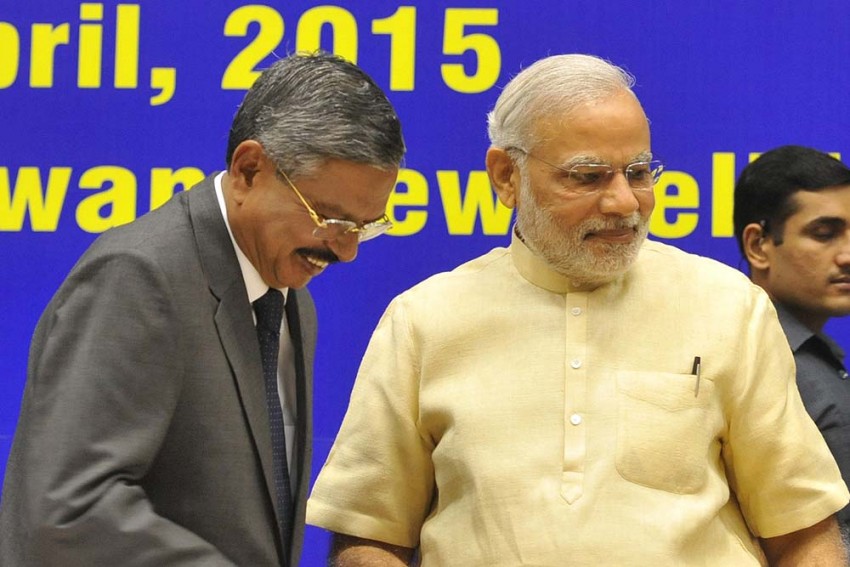 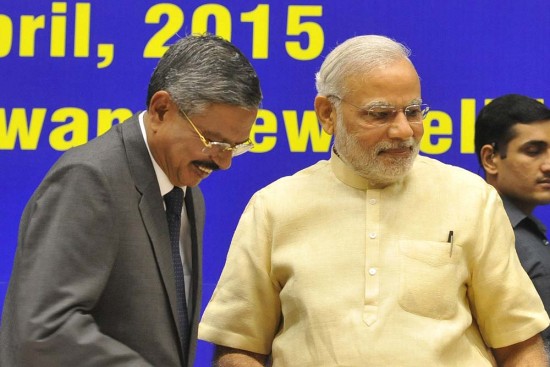 When former prime minister Manmohan Singh addressed the chief justices conference in 2013, he delivered a prepared speech. This year, Prime Minister Narendra Modi spoke extempore at the event, held on Good Friday despite two judges seeking a rescheduling. Speeches at such events tend to be formal. But Modi’s informal, anecdotal speech was different—and started a controversy.

In his speech, Modi spoke of “five-star” activists driving the judiciary and also referred to cases involving “five-star” activists. The judges, of course, have refrained from commenting. But many have expressed disapproval. “Five-star activists are actually simple, honest people fighting for lost causes,” says one.

Modi had some gratuitous advice to offer: the judiciary, he said, should aim not only at becoming powerful but also more capable. He promised to remove 1,800 obselete laws. And he made a swipe at the mushrooming number of tribunals eating away budgetary allocations. All this did not draw comment.

But critics pounced upon the “five star” jibe: it was widely seen as targeted at Teesta Setalvad and Javed Anand of Citizens for Justice & Peace, which has taken up the cause of post-Godhra riot victims; and Priya Pillai, a Greenpeace activist who was prevented from flying to London, an act held illegal by the Delhi High Court. The judiciary had backed the activist: the Supreme Court denied custody of Teesta to Gujarat police, which is investigating her for misappropriation of NGO funds. Rights activists say she is being harassed.

Advocates say it is uncalled for to refer to individual cases that are subjudice. Some say remarks border on contempt.

Earlier this year, two Supreme Court judges had recused themselves from hearing Teesta’s bail plea; this too had drawn attention in the media and on social media groups. The two judges—Justice S.J. Mukhopadhyay and Justice N.V. Ramana—had apparently done so because Modi had attended their daughters’ weddings. This was criticised because the judiciary is not supposed to be seen fraternising with the executive (and therefore, politicians). The custom is for judges to invite the law minister and ministers who are also members of the bar, meaning lawyer-politicians such as Ravi Shankar Prasad, Kapil Sibal, Salman Khursheed and others. But editor, author and BJP national spokesman M.J. Akbar had argued that judges could not be deemed to be dishonest for observing social niceties. He argued that Manmohan Singh too, as prime minister, had attended weddings in the families of Supreme Court judges.

Senior advocate Meet Malhotra sees Modi’s remarks in a broader perspective. “When Modi was yet to be prime minister, he used the 2G case as a political wea­pon; now he’s complaining of judicial overreach and of judges playing into the hands of activists!” he exclaims. Senior advocate Raju Ramachandran says Modi’s remarks were “wholly inappropriate”. “It’s fine enough to complain about judicial overreach but to refer to individual cases is uncalled for.” There are those who even think some of what the prime minister said borders on contempt of court. They point out there’s a contempt petition pending against senior advocate Prashant Bhushan, who had declared that some former chief justices were corrupt. Bhushan, incidentally, might probably count among Modi’s “five-star activists”.

Soon after the conference, a Supreme Court bench headed by the CJI did not stay the contentious National Judicial Appointments Commission (NJAC) Act, seeking to replace the prevailing collegium system of appointing high court and Supreme Court judges. The act, which received presidential assent in December, had not been notified beca­use of a batch of petitions against it. These have now been referred to an SC constitution bench of five judges.

While decisions and resolutions adop­ted at the conference are yet to be made public, a former solicitor general of India wryly quipped, “Apex court judges can’t expect any great learning from prime ministers and chief ministers.”