Our dalchini doesn't come from a cinnamon but a cassia tree. Only the tree's genus is the same and the flavour suitably imitative 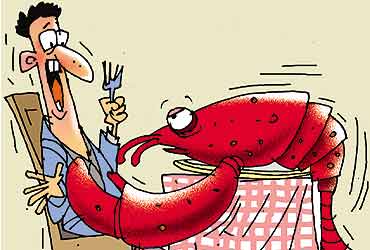 Call us chicken-hearted or jelly-livered, but there’s one restaurant sign called ‘Catch of the Day’ that makes us go soft in the stomach, because it hangs without a price. We still haven’t seen a diner blasé enough to ask, "Just how much is that full-bodied lobster in the window going to cost me?" But gulp, mutter, sputter and spout, how would you feel if we said it isn’t classic lobster you’re eating? Or, that our grocers have been selling us ‘bastard cinnamon’ for years? Or, that pink peppercorn isn’t really pepper at all? Take heart now all ye Captains Courageless. We’ve done some amateur botany and marine biology to unearth the truth about what we’re eating.

Starting with the worst slur to garam masala, our dalchini doesn’t come from a cinnamon but a cassia tree. But choke not completely, for at least the genus of the tree is the same and the flavour is suitably imitative. Real cinnamon tastes sweeter and has a curly-quill-shape. The cassia we get is thick and flat. Yet, if you think that the case of the confused cinnamon ends here, mind-it before flinging tejpatta into your pulao. Once again it’s dried cassia masquerading as bay leaves. Genuine bay, called laurus nobilis comes from a laurel tree and the only places in India where you can easily find them are in Asterix comics and on the holy cross. Caesar, noble Romans and Jesus all wear crowns of laurel leaves.