Nothing deters foreign investors in India, not even Gujarat or war 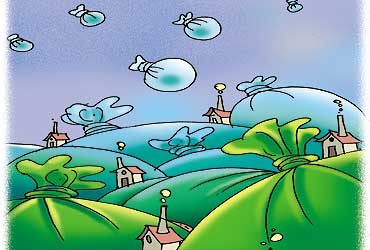 outlookindia.com
-0001-11-30T00:00:00+0553
In September last year, the United Nations Conference on Trade and Development (UNCTAD) shot off a press release predicting that world foreign direct investment (FDI) flows were likely to decline 40 per cent in 2001. And this, noted the release, had nothing to do with the events of September 11. It went on to add that FDI flows to developing countries in Asia would decline by 6 per cent.

Maybe UNCTAD got it wrong, maybe investors don't pay much heed to predictions and estimates—at least as far as India is concerned. According to the commerce ministry, FDI inflows to India shot up by 66 per cent in 2001-02 to $4.1 billion. But why? That is the question puzzling many. What prompted investors to rush money into India? Especially during a general slowdown in the global economy, while war clouds gathered over the subcontinent and despite incidents such as Gujarat. "It shows the high investor confidence in India," says Tapan Bhaumik, senior advisor, CII. "With policies being liberalised, more and more people are coming into India. What is happening is that the good experiences are reported back to the country of origin," says Anjan Roy, advisor, economic affairs, FICCI.

Confidence is the name of the game where FDI is concerned. And India doesn't fare too badly. The AT Kearney Confidence audit of February 2001 puts India's confidence index (1.35) at No. 7. Singapore (1.23) and Thailand (1.21) are 13th and 14th respectively. China (1.69) is third. The index is based on interviews with senior executives from 1,000 of the world's largest firms and is widely accepted as a good indicator of the preference and direction of investor flows. "The acquisition of shares by foreign companies has been on the upswing. It was at an all-time high at $881 million in 2001-02. Secondly, investment made through the RBI's automatic approvals touched $767 million. Investment through both these routes has given a fairly good push to FDI flows," says R.K. Thukral, project director, Datanet India, a Delhi-based research company that tracks statistical data on India.

Comparisons with China are inevitable when talk veers around to FDI. However, many feel that such comparisons are fruitless. For long, China has been notorious for overstating FDI through round tripping, where the special tax breaks and incentives offered by the government to attract FDI led mainland businesses to route domestic investments through shell companies in Hong Kong. "India's reporting of FDI inflows is much more restrictive than China's," says FICCI's Roy. In fact, the current FDI figures would be even more if India had gone by the IMF's definition of FDI. According to the IMF, foreign portfolio investment flows, reinvestments and direct capital flows such as debt securities, trade credit and grants are treated as part of FDI. "India has largely not been affected by external factors. In spite of the various odds, India is attracting investors due to the government's inclination to invite private participation by creating investment opportunity in infrastructure like power, telecom and highways. The IT sector is another great reason to invest in India," says Thukral.

A FICCI survey puts this buoyant optimism in the right perspective. It drew some important conclusions after a survey of 385 respondents (companies with turnovers ranging from Rs 10 crore to Rs 850 crore) across sectors. Sixty-one per cent of the foreign investors reported profits or breaking even with capacity utilisations ranging between 50 and 75 per cent. Considering that an economic slowdown was weighing down on them, this was indeed remarkable. Fifty-one per cent of the respondents revealed that they plan to put into motion expansion plans in the near future. There's more. Actualisation (ratio of inflows to approvals) has been going up steadily.From a low 29 per cent five years ago to 52.8 per cent last year (January-December) after touching a high of 59.5 per cent in 1999. "The projects in the pipeline are being implemented much faster now," says Bhaumik. "The Indian economy has shown great resilience instilling confidence among investors."

The not-so-good political situation in countries such as Indonesia has helped investors decide where they would like to place their money. The Southeast Asian tigers have, in any case, not yet completely recovered from the 1997 financial crisis. The focus of India's efforts has been—to borrow a quote from N.K. Singh, member, Planning Commission—to "make ourselves heard in boardrooms of leading companies across the world". Going by the current trend, that seems to be happening.