They say the sitar mantle is already his. Nishat Khan is wowing the East and West. 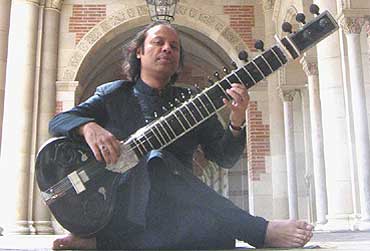 outlookindia.com
-0001-11-30T00:00:00+0553
If no painter painted his mind as forcefully as Caravaggio, then no sitarist plays the sitar as magically as Nishat Khan. His talent buffets, cajoles and carries, touching a core you didn't know existed. In his hands, the sitar sings with a gentle ferocity, leaps with virtuoso vigour. His search for the soul on those strings is a journey of wonder and discovery. The light shines equally on the notes touched, the heights scaled and experiments conducted. Just like a Caravaggio painting where complex emotions are captured on every face with equal mastery, as Nishat is fond of saying. And on the artist's terms—no compromises, no short cuts.

So does the sitar crown now sit firmly on his head? Many say the mantle had passed on to him some time ago. He's been consistently brilliant, intensely innovative and shown a formidable range. Yet he goes beyond virtuosity, playing with a sense of confidence and peace. For him, the sitar is both a lover to be treated gently and an adversary to be conquered, but respectfully. His peer group has long been in awe of his talent and his flamboyance—something he doesn't hide, and for good reason. The Hindu ascetic in him values the stern discipline essential for the sitar while the Muslim rasik enjoys the act of playing and the adulation that follows. His spirituality is a blend of the best of India—he talks as easily of sadhus and sants as of Allah, asserting the importance of both strands in his heritage. 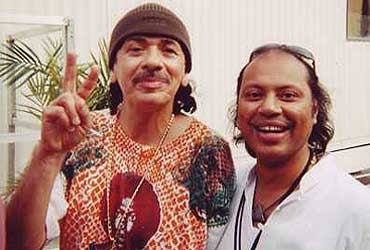 Nishat Khan is equally comfortable around the likes of guitar god Eric Clapton, who invited him to play at his guitar festival last year. Blues legend Buddy Guy and rock star Carlos Santana listened enraptured. So what did he show the masters of another instrument, another world? "I lit a firecracker—a short piece to show the complexity of the sitar. They went crazy," he recalls with amusement. He has collaborated with the world's greatest flamenco guitarists, Paco DeLucia and Paco Pena, creating music that traced the source of the flamenco to the sands of Rajasthan, from where the music was carried by the gypsies to Spain absorbing influences along the way. He has explored music from Gregorian chants to jazz. He counts Sting among his circle of friends and has played for Nelson Mandela and the late Princess Diana. He has rung the domes of some of Italy's most historic churches with his sitar. In the process, he's touched many hearts and stretched the Indian music tent farther and wider. Western critics refer to him as the Jimi Hendrix of sitar and a one-man band.

An important part of the India Rising story, Khan is an ambassador in his own right, a link between two worlds. He represents the best idea of India—of harmony, spirituality, the unique blend of Hindu asceticism and Sufi devotion, of his own rich tradition going back 400 years, of his father Ustad Imrat Khan and his revered uncle Ustad Vilayat Khan. "I want to bring the value of the great masters to the forefront. I hope in time that I will be one," he says with some modesty. "There is something nostalgic about our music. When I strike the first note, I have the sense of all of us being in one single, shared space. It is as if the music itself conveys everything."

Khan enjoys the California jetset life but also understands its Kalyug excesses. He can chat with Tom Cruise and George Clooney at parties, check out a Bob Dylan concert to understand his legend, go to a club with Shekhar Kapoor, but depends on his Indian roots to anchor him. Beverly Hills is home these days but his heart is in India. After a concert, he can change from the traditional churidar-kurta into a snazzy Italian jacket and trendy square-toe boots to unwind. He floats on a high that can come only from knowing he has given another incredible performance, pushed the musical envelope and shared great moments with his audience.

Last month, he played at the prestigious Smithsonian Institution in Washington DC, proving his superiority yet again. He began with Raag Yaman, building the ambience with an hour-long aalap (who does that anymore in today's McWorld?). Many artistes compress the aalap not just abroad but at home too fearing it might burden the audience. A bit like reducing the fiery Indian cuisine to a multi-purpose, bland "curry" and sacrificing taste to win wider western acceptance.

But Nishat Khan refuses to dumb down. Because once you go down that path, you lose a bit of soul, a bit of "ras" and a lot of credibility. He pursues excellence with rare relentlessness. That day too his aalap expanded into a lengthy jor filled with ideas and pure joy. As he burst into the jhala, he was "talking" to the audience, each stroke revealing nuances and sparks. His taans in Raag Hameer further showcased his range.

Last year, he taught at the University of California at Los Angeles (UCLA), trying to give the been-there done-that student body a flavour of the guru-shishya tradition. The dean called soon after, saying Khan's students had become respectful to other professors as well. "We have so much to share with the world...our sense of justice, humane approach. There can be a coming together between different peoples of the world," he muses. "Artistes do have this sense of responsibility. Besides my music, my aim is to help promote peace and justice in the world." After the war in Bosnia, the president of Croatia invited him to play at the Zagreb Opera House—so impressed was he by Khan's music, especially his album Meeting of Angels where the maestro had played with the Ensemble Gilles Binchois, known for its hypnotic rendition of Gregorian chants. In 2003, he received the 'Lifting Up the World' award from a UN-linked foundation.

Every winter, Khan travels to India for concerts and spiritual rejuvenation—living on Celebrity Drive can be stressful. He plays at the big music festivals across the country, meets audiences and friends. Yet, interestingly, his hometown's most prestigious gathering of musicians, Calcutta's Dover Lane festival, continues to overlook him. When I ask him, he gives a knowing smile but does not elaborate. In his younger days, he riled a few "senior" artistes, speaking out on behalf of his beloved father and uncle, whose genius remained unrecognised by officialdom because of politics and artistic rivalries. Let's hope his doesn't.