Chips Of The Old Flock

These boys will be men soon. And if their illustrious fathers are on course, India may well have an incredible playing eleven. 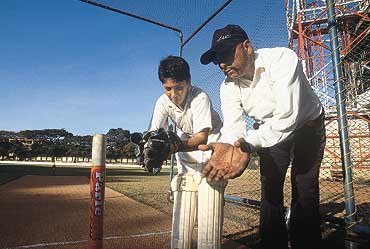 outlookindia.com
-0001-11-30T00:00:00+0553
Doesn't this sound like a rousing Hollywood epic? A band of men with a glorious past work with their protégés to carry forward a rich tradition: blood, sweat, toil and cricket. And if these men are on course, they could line up a playing eleven for a Test in the next five years!

This team would have 'em all—batsmen, seamers, spinners, and a wicketkeeper-opener. They are the brood of Roger Binny, Syed Kirmani, Madan Lal, Krishnamachari Srikkanth, Shivlal Yadav and Brijesh Patel. Add Mohammed Azharuddin's son to this list and a complete team comes forth. Almost!

These boys are no minnows. A couple of them have made it to international cricket already, the junior edition. Arjun Yadav and Stuart Binny have played in under-19 World Cups. The others—Kunal Lal, Udit Patel and Adithyaa Srikkanth—have represented their states in the under-19s. Aniruda Srikkanth and Sadiq Hassan Kirmani have turned out for state under-14s.

In India, however, feels cricket writer T.G. Vaidyanathan, this tradition of the son following his father's footsteps is limited only to batsmen and not bowlers, the odd exception being Arjun Yadav. "Bowlers are despised here. People want their sons to grow up as aggressive batsmen. And most batsmen—Tiger Pataudi, Vijay Merchant and Hanumant Singh—have come from rich families, while bowlers like Vinoo Mankad, T.R. Rangachari, Chandu Borde or Eknath Solkar are non-matriculates, an indicator of the economic status of their families."

Of course, the Indian subcontinent has a tradition of sons following in fathers' footsteps, as cricket sociologist Ramachandra Guha points out: "It's common to inherit the father's occupation not only in cricket but also in politics, music, arts and architecture." In cricket, we have had Vinoo Mankad's sons Ashok and Rahul, A.G. Ramsingh's sons Kripal Singh, Milkha Singh and Satwinder Singh, Lala Amarnath's sons Surinder, Mohinder and Rajinder, M.L. Jaisimha's sons Vivek and Vidyuth, Vijay Manjrekar's son Sanjay, and Sunil Gavaskar's son Rohan.

Though the new brat pack has yet to make it big, two issues have begun to ruffle them. One, they have to live up to expectations because their fathers played for India. Two, the aspersion that they are in the team because the parent has selectorial clout. Obviously, Madan Lal and Shivlal Yadav, national selectors, face the problem more than the others. Yadav says he has advised his son to keep the pressure off by concentrating on performance, "then nobody can ever point a finger at him". He claims that as a national selector, he felt no pressure or conflict of interest when he watched his son play for India-B in the recent Challenger Trophy. But as a father, he had his heart in his mouth when Arjun came on to bowl.

Brijesh Patel says he kept away from the selection process for the under-19 World Cup, while Kirmani vows that he "won't shirk to fight for him. But I will fight only on the basis of his performance, just as I would for another player." According to Suresh Menon, editor, The New Sunday Express, the family cricket connection is a double-edged sword. "It makes it that much easier when a door opens by itself since you are somebody's son. But as in Rohan Gavaskar's case, it could also work against you."

B.R. Srikanth With inputs from Bobby John Varkey in Delhi, S. Anand in Chennai and Savitri Choudhury in Hyderabad

"I'm Always Attracted By The Ridiculous In People"