Child Is The Father Of Man 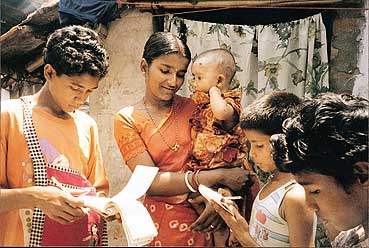 outlookindia.com
-0001-11-30T00:00:00+0553
Somewhere in an obscure corner of the city of joy, a group of boys and girls is rehearsing a play. It’s Dakshindari, one of the poorest slum areas on the eastern fringe of Calcutta. The children are in the middle of coalescing their acting talents with their other job: minding the health of their locality. They go by the name ‘Ekjot’ (Together), their motto—cleanliness is godliness. Their plays and songs aim at spreading awareness about hygiene and health care. Don’t be surprised if you catch them talking polio vaccine or immunisation and giving tips about how to keep your homes malaria-free.

Straddled by railway lines and located around a half-submerged canal, the area has been officially given a dignified name: Rishi Aurobindo Colony. The surroundings are piled with garbage. Ignorance is rife. Men generally are petty traders, rickshaw-pullers or mechanics and the women work as domestic help in affluent homes. The children have to help in household chores as well as work.

So it’s nothing short of a marvel that the boys and girls still have enough enthusiasm to get involved in health-awareness programmes. There are about 30 core members in Ekjot. Divided into four groups, they fan out to houses with red bags adorned with Unicef’s famous ‘Meena’ motif slung across their young shoulders. (‘Meena’ is a successful awareness project of Unicef.) Do you use mosquito nets to prevent malaria? they ask. Have you had your child immunised? What about polio drops? Do you know you shouldn’t walk bare feet on the road? The answers to all these are always ready on their own lips.

The Ekjot health-awareness experiment has been so successful that children are now carrying their message to their schools. "Our teachers say it’s very good work. They want other students to follow our example," says Chumki Ghosh. Teenager Sibashis Ghosh, aware that any day now he might have to step in to keep the home fires burning, wants to go on with his ‘mission’. Sibashis is the only Indian to be featured in Unicef’s A Life Like Mine, a book on child-achievers around the world.

All this began in 1998, with the community’s association with Prayasam, an ngo working for child rights. Says Prayasam’s Amlan Ganguly, "For parents, keeping their children occupied was a big problem. The area around Dakshindari was known as a den of drug peddlers and criminals, and they were naturally worried."

Initially, persuading them to let their children take part in meaningful activities proved difficult. But once it happened, there was no looking back. Take for example Bablu. He loves to sing and act. And study. But after class 7, he had to drop out from school to augment his family’s income. "But he makes it a point to come to every performance we put up," chirp his friends, boys and girls in ages ranging from seven to teens.

The children learnt to paint in workshops. They trained under choreographers and now devise their own dance steps. Their songs, often based on Hindi film ditties, relayed the message of good health. They have performed in many functions. "At first, the adults gave us very little attention, but now they listen to us," an Ekjot member says proudly. They are now learning first aid skills under the guidance of the St John’s Ambulance Society.

Prayasam’s project is visualised in three stages. Children up to three years of age start with ‘Bopon’ or sowing. Then ‘Sahaj Path’, a non-formal pre-primary school for children aged 3-6 years. For children on the brink of starting work, there’s ‘Nirmaan’, which also involves career counselling.

There are dreams aplenty in the Ekjot children. Mithu wants to be a doctor. Sandip, an armyman. The girls, who outnumber the boys, mostly see themselves as teachers. Given a fair chance, most of these dreams can come true. To help, contact: Prayasam, CG 65, Sector II, Salt Lake, Calcutta 700 091: Phone: 23343921.

Fear Over The City