Child Is The Father Of Mammon

It's commerce with a noble pretence. And as educational institutions rake in the moolah, the point that there's no business like school business is driven home with a vengeance. 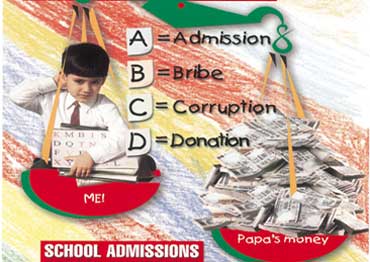 outlookindia.com
-0001-11-30T00:00:00+0553
Last month, students in the senior secondary section of Delhi's up-market Ryan International School were meted out an unusual punishment. They stood on their benches through school hours to atone for a grave act of 'indiscipline'. The students had failed to pay up Rs 900 towards a proposed career-counselling camp organised by the school. Such was their offence in the eyes of the school that they even wrote their tests standing on the benches.

This, however, is hardly surprising when it comes to Ryan International. It's well known for openly demanding large sums of money—"preferably through demand drafts," say guardians—as building funds. But punishing students for not contributing to a school programme whipped up a controversy which further compounded the school's infamy after the incident leaked to the newspapers. Now a secretive school administration refuses to answer questions and the principal has gone on leave. The Delhi State Juvenile Welfare Board is investigating the matter.

But the Ryan International rip-off is merely the tip of a murky iceberg. Schools, all over India, have begun donning the mantle of respectable extortionists, forcing their students to cough up money—euphemistically described as 'donations'—on sundry pretexts of admissions, organising functions, a new building, whatever. The donation scandal is a new pandemic sweeping India's educational system. In a country where the demand for quality schools outstrips supply, private schools have become the new mafia, holding parents to ransom through this nefarious donation culture.

Demands for donations range from anything between Rs 5,000 to Rs 5 lakh in private schools. Here are a few instances of how this racket has spread its tentacles:


Seeking admission to a reputed school for their wards is the Indian parents' biggest headache today. From costly admission forms (anything between Rs 25 and Rs 300), school interviews which grill both parents and kids and include a thorough testing of their 'philanthropic' quotient—"What can you do for the school?"—school admissions are a traumatic experience.

Parents have some shocking tales to tell:

Schools continue to milch parents even after their wards have been admitted. In Lucknow, Ravi and Manisha Ahuja were coaxed by the principal of their child's school, Sherwood Academy, to contribute to the computer section so that its construction could be completed fast.

It's difficult for some parents to keep paying. Take the example of 14-year-old Saurabh Goel from Patna. He was a seventh standard student at the renowned Scindia School, Gwalior, till a year ago. But now he is continuing his education at St Karen's High School, Patna. The reason, according to his mother, is simple: "First, the school fee was hiked beyond our means. Besides, Saurabh's performance was not comparable to the money we were shelling out." Bangalore-based engineer Gajendran, 32, was asked to fork out Rs 25,000 or forfeit the kindergarten seat for his daughter Prema at Horizon Public School as "there were 40 aspirants for just five seats". He paid in cash but was not given a receipt. Additionally, he had to pay Rs 11,000 as tuition fee for the entire year in advance. Says he: "I didn't want my child to lose a year."

It's not money alone that the schools demand from the students. "Every day, I open the school diary of my five-year-old daughter with great trepidation that it might contain some demands like building fund, annual function fund, foundation day celebration fund, etc. We are going through hell," says Anil Srivastava, a Delhi-based parent. Lucknow's A. Singh suffers a similar fate. He was asked to donate two generators for the new building of a reputed city school to get his daughter in. When he refused, the daughter was not granted admission. Students are also turned into fund-raisers: Mallika of Delhi's Modern School, Vasant Vihar, says: "Last year, our school brought out a souvenir. All the students were told to bring sponsors for ads in the magazine."

But donations in schools seem to be shedding their last pretence of respectability. A school in Mayur Vihar demanded that its students replenish the school canteen's gas cylinders.

The schools are pretty blase about the donation culture. In Patna, the personal assistant to dps principal K.B.S. Srivastava, when asked about complaints of parents, said: "It has to be paid by everyone at the time of admission." Abhilash Singh, principal of the Mumbai-based Arya Samaj Mandir School, even justifies donations: "It is so expensive to maintain and run a school that it's unfair to demand that unaided schools should not ask for donations. I think most schools are justified in asking for donations." Others, like K. Laktakia, vice-principal of the Lucknow-based Jaipuria School, accuse middlemen of swindling money in the name of donations for schools. "Often someone else demands the money and pockets it, and the school earns a poor reputation," says Laktakia.

A well-known parliamentarian from central Calcutta is notorious for charging Rs 1.4 lakh for a yearly quota of 40 seats to a prominent boys' school in the neighbourhood. It's difficult to believe though that the school doesn't get a cut from the MP. Other principals like Shyama Chona of dps, RK Puram, and Lata Vaidyanathan of Modern School, both Delhi-based schools notorious for extracting hefty donations, deny that they take a "single penny (see box)".

This is shameful considering the fact that private schools reap maximum benefits out of government policies such as prioritised clearances, preferential sale of plots at concessional rates and a free hand in management. Most of the schools are affiliated to bodies registered with the Registrar of Societies. By definition, the societies are essentially established for philanthropic and public charitable purposes. So, not only are they entitled to seek land at nominal prices but also enjoy several tax exemptions. Thus, individuals come together to form a society and, after seeking registration, apply for land at concessional rates. This is followed by the construction of the building.

According to the rules, any school that seeks recognition from the department of education has to have infrastructure in place—buildings, laboratories, playgrounds, instruments and stationery. Therefore, in Supreme Court lawyer Ashok Agarwal's opinion, there is absolutely no ground for schools to ask the parents to fund their expansion plans. Agarwal has been championing the parents' cause. Explains he: "It is totally illegal to charge any sort of development funds from the students. Only revenue expenditure, which means the salaries of the staff and cost of running the general administration of the school are to be charged from students.Construction of school buildings is covered under capital expenditure and it is illegal to ask parents to pay for it."

Three years ago, dam filed a pil in the Delhi High Court against the massive fee hike effected by unaided private schools. (Delhi has some 1,000 private schools with an estimated Rs 1,000-crore 'turnover'). The schools said the hike was provoked by the anticipated increase in the payscales of their staff after the implementation of the Fifth Pay Commission recommendations. But the state government issued orders restricting the fee a school could levy as registration to Rs 25, admission to Rs 200 and security to Rs 500. It also directed that no separate computer or science fee should be charged till the secondary level.

After a protracted legal battle, the high court gave a landmark verdict on October 30, 1998, stating that "there has to be element of public benefit or philanthropy in the running of schools.The schools are to be run for public good and not for private gain. The object has to be service to the society and not profit. The public benefit and not private benefit to a favoured section of the society has to be that aim". The court also stated that commercialisation of education and exploitation of parents wasn't permissible.

Subsequently, it appointed a committee under the chairpersonship of retired Justice Santosh Duggal to look into individual complaints and examine the fee structures in unaided schools. The investigations opened a can of worms for the education department. In its report, the committee castigated the lackadaisical attitude of the education department: "Whereas the committee deserved all the cooperation, assistance and goodwill (from the education department), what it got was complete apathy and indifference." The schools also remained indifferent. Out of 929 unaided schools in the capital, only 187 responded to the public notices issued by the committee. Most of these didn't provide the data requisitioned for inspection. "The problem was further compounded by the lack of uniformity and internal consistency in the presentation of accounts by the schools," the committee said.

Today, most of the educational trusts and societies which manage private schools are run by individuals and families. The managing committee members in most of these societies are members of the same family or political leaders, retired bureaucrats, senior government officials and even eminent jurists who are of use to the institution. Mumbai-based social activist Leo Rebello, who has filed various public interest petitions, says: "Mumbai's Sheriff Augustine Pinto runs a chain of schools. Most of his schools are named after saints so that clueless parents think they are convent schools. And the donations in his school range from Rs 7,000 to Rs 30,000. Most private schools are flourishing businesses run by such brilliant men." Repeated attempts to get Pinto's reaction failed.

No wonder the governments are totally helpless in cracking down on this scourge. Delhi's chief minister Sheila Dikshit admits her government's helplessness. Says she: "It is a fact that some public schools in Delhi are charging very high donations. It has become a racket. But it is really difficult to penalise such errant schools. The adverse action could be closure of the schools. But since it involves the fate of hundreds of students, there is pressure also from the parents not to take any stringent action. Further, the schools often circumvent the laws and make easy escape (see box)." In West Bengal, school education minister Kanti Biswas says the government is aware of the racket but since "most parents prefer to keep silent", it is difficult to initiate action.

So, the racket continues and parents and students remain at the complete mercy of these unscrupulous schools. Hapless students like Delhi-based Nupur Jain, whose parents refused to pay up Rs 15,000 for her admission to the capital's Lancer Convent, end up on the sidelines. Says her mother Neelima: "We refused their demand and she was denied admission." The worst-kept secret of Indian private schools—give money, will study—has clearly got out of hand. When will our knowledge mercenaries begin to mend their ways?

(Some names in the article have been changed.)

As Dirty As It Gets