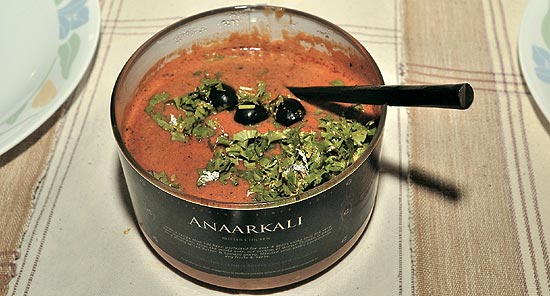 You’ve heard of Chicken 65, Chicken Manchurian, Chicken Makhanwala and Chicken Patiala. Now here comes Chicken Natwarlal. No that’s not its real name, but it might as well have been called that in a fitting tribute to Mr Natwarlal, the con artiste of the 1970s who inspired the Amitabh Bachhan movie, and blithely explained to the police that he never took any money from his victims; they were eager to give it to him, so he simply obliged.

What I’m talking about is something called Anaarkali Chicken: a butter chicken that’s being marketed for Rs 6,000 by a pair of enterprising techies in Hyderabad. You order on the Net, deposit the money in their bank, and 24 hours later they deliver a portion sufficient for two persons to your door (rotis not included).

It all began two months ago, with a small ad in a local magazine, directing you to a website, www.anaarkali.in. And since then this Rs 6,000 chicken story seems to have generated an inordinate amount of buzz, being picked up by publications all over India and outside. (Headline in The Independent, London: “The 85 Euro curry taking India by storm”). Significantly, however, few of the journalists writing about it seem to have actually tasted the product.

The first question, obviously, is why should butter chicken cost so much, when Rs 6,000 could buy you a meal at a Michelin-starred restaurant in London? Well, Anaarkali’s promoters explain that it’s a “secret recipe”, “perfected over 8 years”, which uses “only the very best ingredients from India and the world over”.

Sounds intriguing. But what exactly are these prized ingredients? We imagined hand-raised, milk-fed chickens from their own private farm; organic tomatoes, picked from the fields before dawn; homemade butter leisurely churned by the daughters of the family. But no. It turns out the ingredients are all simply off the local supermarket shelf: Godrej chicken, Hunt’s tomato paste, Lurpak butter, Nestle dahi, Filippo Berio olive oil, Dabur honey and Kraft cheese powder (yes, Kraft cheese powder!)

OK, so then maybe the magic of the butter chicken is in the recipe itself? Well, they say they can’t talk about the recipe because it’s “secret”, which is fair enough. But then –oops!– there’s an embarrassing revelation on their website about the two “Biggest food moments” in their lives being: 1)  “As a kid I once had egg curry and washed it down with Gangajal by mistake. It tasted so good...,” and 2) “I once had to make sandwiches from only eggs and capsicum but I did so with all my heart, and the way they were liked by my friends….”

If these are the two defining food moments in someone’s life, I think we can safely deduce they’re not overly endowed with culinary sensibilities.

But all this is missing the point. And the point is simply this: Anaarkali’s outrageous price story taps into contemporary India’s complex, deep-rooted relationship with money—making it, accumulating it, enjoying it. Greed is OK; greed is almost sanctioned. As the jingle and emotive images of the bank TV commercial so pithily put it, “Mere desh mein, paisa sirf paisa nahin hai.” The success of Kaun Banega Crorepati was in tapping into this instinct, and letting it loose. Today there are circles where a bride’s trousseau is incomplete without a Rs 17 lakh Louis Vuitton luggage set, and a Rs 1.7 crore Bentley Azure is the unapologetic vehicle of choice, despite our jammed city roads.

The flip side of this fascination for money, and what it can buy, is the opportunity it gives people to think up ideas like “Hey, let’s market a Rs 6,000 butter chicken!”, thereby, of course, becoming part of the cult themselves.

Anaarkali’s website unapologetically presents a detailed breakup of the costing: the cost of preparing the chicken itself is Rs 824; their profit is Rs 1,736; the rest are miscellaneous business expenses, including cleverly giving you back Rs 800 to donate to charity, to assuage any possible guilt pangs for your splurge. To make money in India today you don’t necessarily need talent, you need cojones.

And, finally, to come to a question that seems almost peripheral to all this: what does the Rs 6,000 Anaarkali Chicken taste like? Well, it was quite nice, in a slightly Europeanised kind of way. The kind of thing you’d expect to get if you went for dinner to a techie-friend’s house. And never mind if one of the defining food moments in his life was just making egg sandwiches “with all my heart”.

(The author is an advertising professional and writer)