Kishore Singh's wishlist discusses the things we would die to own, our manna and meter, in a bygone era and in the new Information Age 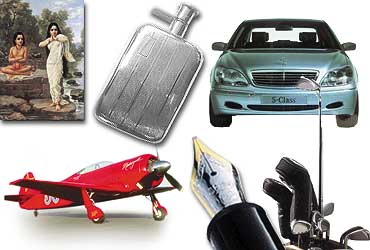 outlookindia.com
-0001-11-30T00:00:00+0553
Love your Montblanc pen? The beach house? Your executive Lear jet? The Bose sound system? It's amazing that the more things change, the more they remain the same.

At the turn of this century, when horses are a big rage—whether you ride them or own a stud farm—it should come as no surprise that at the turn of the previous century too a passion for horses should have had precedent. Stables were standard fare at your average manor, and gentlemen of leisure thought nothing of buying thoroughbreds from Venezuela or Arabian fillies—it was definitely trendy to be seen at the races. Since then, ask Vijay Mallya how much, if at all, things have changed. Or the decorative crowd at the Jaipur Polo Grounds in New Delhi that turns up on season evenings in chiffon and pearls. The only change, as Bonnie Dundlod or Jodhpur's Shivraj Singh will testify, is that it's hip now to promote the indigenous Marwari breed too.

You can even be excused for having blue blood in your veins since royalty is also back in fashion. And with that, all the perks that attend to the post. The private plane, naturally (except that today's Thapars and Jindals, a mite commercial perhaps, don't hesitate to lease them out). The cars in the driveway, of course (where luxury, power and outstanding looks still count—the DeSoto having been replaced by the Mercedes S series): it's all right if all you have is a hatchback in Mumbai, but back in the Mediterranean where you summer, you do have the sports coupe? And, without doubt, you still have a townhouse in the mountains or by the beach, and a tiny villa in London.

In a hundred years of living it up, Cartier rings, Tiffany brooches and Van Cleef & Arpels jewellery still count, though Indians are losing their taste for 18-carat sheen in favour of Swarovski collars. Frazer & Haws now does Ganesh figurines for popular taste that tends towards the kitschy. And if you check out the Scindia collection at their Gwalior palace museum, or that of the Nizam of Hyderabad at Salarjung, you'll find that high birth and another century weren't proof against bad taste.

So what does today's gentleman of leisure surround himself with? (We must leave the likes of Bappi Lahiri out of this, for all he swathes his hairy self with are ropes of gold). Definitely a cellphone like the sexy 'Blue i', but since even the average dude can buy himself that, his gizmo is more likely a power-backed computer that stops short only of turning into a time machine. Naturally, he carries a mobile office about his person—a nifty laptop and digital diary, at the least. Pro shops in the cities keep a greater variety of woods and irons for his power game of golf than his forbears, and that too at the flip of a credit card.

But then, the credit card's new too. Four and five score years ago, your family's name was all the credit you needed. If it didn't count for much, you knew it was a long journey up the heap. It was tough to buy social legitimacy, but money could buy you the right accoutrements: an English governess (provided you'd been careful in your selection, and didn't end up with a cockney accent), Wedgwood and Rosenthal and Baccarat (all now still available, but only antiquarians actively collect them), carpets woven to fit rooms and woven by prisoners in jails (Shyam Ahuja dhurries rule the roost now, but back then, dhurries were strictly underlays for carpets).

No gentleman worth his salt could remain disinterested in art. A library was mandatory, whether you filled it with encyclopaedias, tales of adventure or fiction. Today, a PC suffices, but expensive illustrated art books still leverage status.

Those who counted for something and took the p&o to London (cruises, incidentally, are back in vogue) brought back European art, or patronised the likes of Nicholas Roerich and Stefan Norblin. There was some interest in Ravi Verma and Amrita Shergil and even, after a fashion, the brothers Tagore; but you had to have at least some Thomas or William Daniells on your walls—even an original aquatint in lieu of the real thing. Since then, Daniells have become rarer than pure oxygen, Shergils are huge collectibles, few can understand why Verma is feted, and the Tagores are standard fare at auctions. If, however, you don't own the mandatory Husain, a couple of Satish Gujrals or F.N. Souzas, a flashy Anjolie Ela Menon, the inevitable Sanjay Bhattacharya, and a nod in the direction of the new generation's Jittish Kallat or Bharti Kher, you don't count for much in today's formula age.

That's when you find solace in the toys of this century: a handcrafted, wooden Mach 3 to replace grandfather's cut-throat razor. A flat-screen home theatre system, preferably hung up on the wall, for those hours grandpop reserved for shikaar. Alas, those flintlocks with their silver wire inlaid butts are now as much history as the matchlocks you carried on these excursions, consigned along with the Colt pistols and the swords from an even earlier era to the pages of nostalgia.

And with them, too, other mechanical inventions of the age, such as table clocks in tabernacle cases, or gentlemen's fob watches that appeared so dandy and came in gold cases set with mother of pearl inlay. Or scientific instruments such as astrolabe and sextants, balances and microscopes, that along with toys such as railway models, or those of ships, were prized possessions. (Compare that with the toys your children play with—would you collect a Barbie doll for posterity? Or a Ninja computer game?) Even the dinky cars of just a generation past were something boys grew up with, and retained in their collections as young men.

Where personal grooming was concerned, aviator glasses were just becoming sexy, because flying was a novel experience; today, Ray-Ban claims its aviator version is one of its best-sellers, but in the age of wall-to-wall, shades too come in wraparound versions. The cravat and cummerbund have gone, replaced by a more casual formality, but the blazer is standard fare, and the tie must be silk, preferably jacquard, and if its label says Ferragamo, so much the better.

Naturally, you still get your shoes in London. Unless, of course, they're handcrafted for you by a Chinese shoe-maker. Back then, cobbler's shops 'By Appointment to His Majesty the King' fitted you out with your requirement for everything, from brogues to tap-dancing shoes to polo boots. Long baths were a luxury, and you prepared for them with bathing salts for the water as a bearer stood by with towels and sponge to wash behind the ears. Today, you have a power shower in a glass cubicle with seven adjustable heights for a rejuvenative jet hydro bath. Of course, you have a jacuzzi in the bathroom and a sauna in the dressing area.

The evening sundowner now comes in branded glassware which has replaced the heavier Bohemian crystal, the rage then. That was when you sat over a harpischord, or baby grand piano, or a Lambert violin. Today, if you have musical instruments, they're probably for display, and your music comes in CDs, played on speakers that enrich the sound far more than the original. (Pity the system's wasted on Daler Mehndi, when what you should be playing is some sprightly jazz, or moving Western classical, or a stirring ghazal.)

Yet, for all the changes a century has seen, there is much that remains the same: you collect Parkers and Montblancs not so much to write as to wear in your front pocket as jewellery; the second townhouse announces your status now, as it did then; cars and horses and planes are the measure of a man. A beautiful wife is still a shoulder ornament. And now, as then, you don't wear jewellery—unless you're a deposed maharaja, in which case the title is your concession for 24-carat vanity.

Finally, of course, it's all about elegance: you could drip diamonds on your shades like Elvis, or be decadent and do snow, but that only marks you out as a Johnny-come-lately. Look about you: the suit shiny with use is probably on the frame of the person who's the richest by far.