Checking Out From Pleasant Stay Hotel?

Time may be running out for Jayalalitha, but her resolve to hang on to the chief minister's post is only growing stronger 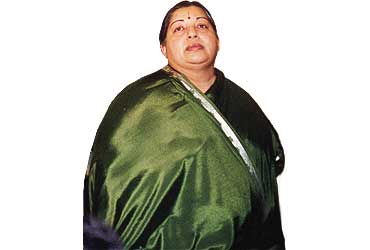 outlookindia.com
-0001-11-30T00:00:00+0553
The die is cast against Jayalalitha. The Supreme Court may have reserved its judgement on the petitions challenging the constitutional validity of her appointment, but irrespective of what it finally pronounces, she still has to reckon with the deadline of November 13. Because, after this day, her supporters may continue to address her as Puratchi Thalaivi, Dr Jayalalitha, Dr Amma, or even a combination of these, but not as chief minister. The August 17 apex court ruling that "non-mlas cannot be reappointed ministers beyond six months" has dashed Jayalalitha's aspirations to set new records in political immorality.

For weeks now, the question on everyone's lips is: "After Jayalalitha, who?". Some of the top names doing the rounds include Visalakshi Nedunchezhiyan (a doctor and wife of late aiadmk minister V.R. Nedunchezhiyan, the number two in Jayalalitha's earlier cabinet), Deepa Sandhya (the 26-year-old daughter of the CM's late brother Jayakumar, who fancies herself as a poet), and yes, even actress-turned-politician Vijayashanti. From the Poes Garden loyalty stable, those who have made it to the 'list' include Ilavarasi (Sasikala Natarajan's brother's wife), and T.T.V. Bhaskaran (Sasikala's nephew, brother of T.T.V. Dinakaran).

However, Jayalalitha's final choice would be decided after consultations with, among others, the Brahmin 'intellectual' trio of former president R. Venkataraman, Kanchipuram math head Jayendra Saraswati and journalist-MP Cho Ramaswamy. It is believed that Cho and Venkataraman have advised her to nominate a retired ias officer and the Kanchi math head would, of course, be opposed to someone like Visalakshi Nedunchezhiyan since she is a widow. But what is beyond doubt is that the chief minister would not risk the job with a ministerial colleague or even an mla, who, despite bowing to Her Highness, could get ambitious. Power corrupts and who would know it better than the Lady of Poes Garden.

But before anything else, Jayalalitha has to come to terms with the law. First, a Supreme Court bench stayed all further proceedings in the Madras High Court in the appeals challenging her conviction in the tansi land deal and the Pleasant Stay hotel cases. Then it hauled up R. Balasubramaniam, the judge hearing the appeals, and wanted a new judge appointed by the Madras High Court chief justice by October 1. A constitution bench of the Supreme Court, hearing a slew of petitions against the then governor Fatima Beevi's decision to appoint Jayalalitha as the CM despite her conviction and the subsequent disqualification, went on to ask the CM's counsel whether a lunatic or dacoit or a non-citizen could be appointed chief minister just because of the people's mandate. Theoretically and legally yes, said the counsel.

However, the party think-tank—such as it is—holds a different view. Such is the supremacy of the aiadmk supremo that they feel no incredulity in defying even the apex court. Didn't the Karnataka government get away with defying the Cauvery Tribunal, and thus the apex court, on the question of release of Cauvery waters? By the same yardstick, they ask, why can't our Amma do the same? K. Malaichamy, MP and former home secretary of the state, prophesies that after Jayalalitha, it would be Jayalalitha. "She does not have to quit," he says with conviction.

The party mouthpiece, Doctor Namathu mgr, argues the people's verdict is above the Constitution and courts. To support this argument, one of its editorials invoked Article 163(2) which says that when a Governor takes a decision using discretionary powers, it is final and cannot be questioned.It also quoted Section 3 of the same Article which says that such action cannot be inquired into by any court.

But Madras High Court lawyer K.M. Vijayan pooh-poohs all such arguments. Rubbishing the party workers' logic, he argues: "In the Minerva Mills case of 1982, it was clearly established that the Supreme Court can override even a constitutional amendment with the help of a two-thirds majority. A judicial review of the executive and legislative actions is always possible." Vijayan, who was assaulted during Jayalalitha's 1991-96 regime, says that the party workers' stance is simply an "argument for argument's sake". As for Karnataka's disobedience of the Cauvery Tribunal order, he says it cannot be equated with an individual's disobedience, like in Jayalalitha's case. "Water here is a political issue involving two states and the S.M. Krishna government cannot face a contempt case. But Jayalalitha could be asking for trouble if she defies the courts."

Here's a worst-case scenario: in the event of the apex court's five-judge constitution bench unseating Jayalalitha, and the yet-to-be-appointed High Court judge upholding the trial court's conviction in the tansi and the Pleasant Stay Hotel cases, Jayalalitha would have to go to jail. She could, of course, take the appeal to the Supreme Court, but the three-year prison term would have to begin.

Alternately, if the constitution bench, in the operative part of its judgement, dismisses the pil saying it is for the legislature to decide the validity of a convicted person's election, Jayalalitha will remain chief minister and the pressure would then be on the unnamed judge who will hear her appeals beginning October 1. If acquitted in time, she can theoretically get elected to the assembly before the six-month grace period expires. Though there's no bypoll due in Tamil Nadu, the party supremo can simply make an mla resign, and then put pressure on the Election Commission into announcing an election, the statutory period being 21 days before election day.

While it may appear that the Supreme Court is stretching the case, many are of the opinion that the apex court is giving Jayalalitha enough time to quit on her own. But not everyone is impressed by such tactics. N.J.R. Prasad, convenor of Lawyers Against Corruption, is critical of the Supreme Court's view that it will respect the "will" of the people provided it is not in conflict with the Constitution. Says he: "The mandate of the people itself coincides with the Constitution. Then how can you talk of conflict? If this is the case, what about the mandate of the people in the Narmada Valley? I would say, physician heal thyself."

Also, one must not forget that Jayalalitha is a master at the perpetuation of the legal game. Her election from Bargur in the 1991 assembly election was challenged and the case, though infructuous now, is still pending with the Supreme Court. If she continues in the CM's post, she is also capable of dragging the appeal against her conviction till she finishes the five-year term. And if the Madras High Court verdict does not help her beat the November 13 deadline, she could even go on casual leave and leave Tamil Nadu chief ministerless till she can get elected.

In the meantime, we can rest assured that Jayalalitha will set new precedents. The law will be made to take Amma's course.