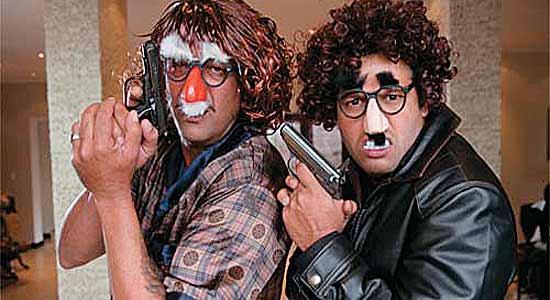 Chatur Singh is Bollywood’s indescribably banal take on the comic Inspector Clouseau played by Peter Sellers in Blake Edwards’ Pink Panther series. The bumbling detective here is dreadfully acted by Sanjay Dutt whose hair and makeup, girth and getup constantly change from one scene to the next. He sports silly moles and stupid disguises, mistakes a flour canister for a bomb and keeps hitting the police commissioner (Anupam Kher) where it hurts the most. Perhaps the director wanted to deliberately make all the characters cartoony, but did they really have to be so unfunny and asinine? More inanity unfolds when we are introduced to a corrupt minister (Gulshan Grover) and his nubile secretary (Amisha Patel) who is all legs and cleavage and wears little else other than a pronounced pout. To top it off, she seduces her boss by swinging away in a sexy, bright red sari. Her moves get the minister killed and Chatur smitten. Post interval, the entire cast is transported to South Africa in search of Rs 500 crore-worth of diamonds and a mafia don called Gulu Gulfam. Chatur Singh has absolutely nothing to write home about and it only reflects an aging Dutt’s desperation that he opted to do such a film. There is a stray scene where you can spot a clutch of Hindi detective novels stacked as props in the background. Wish I could have read one, instead of watching this film. Forget the two stars in the title, this one isn’t worth one.