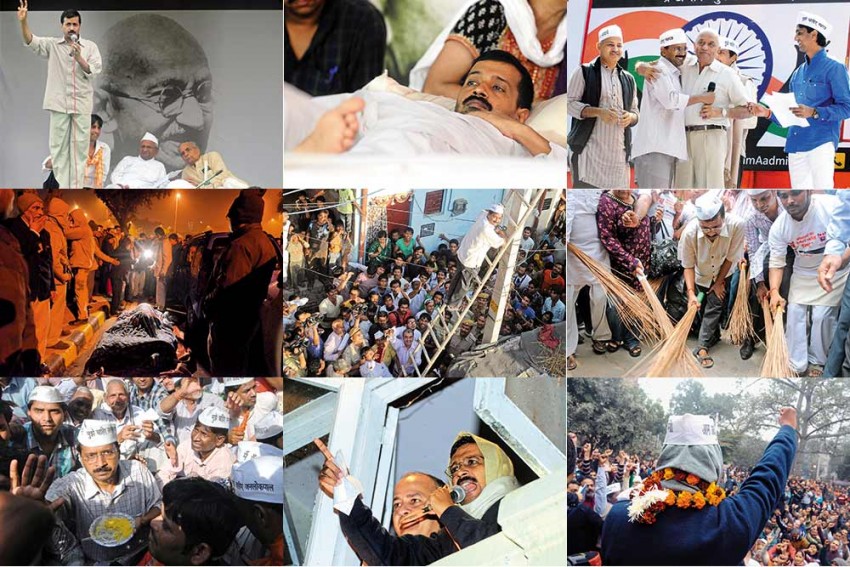 It is September 2013 and the rickety WagonR begins its slow ascent up the Barapullah flyover in Delhi. In the front passenger seat is Arvind Kejriwal, who is citing the Aam Aadmi Party’s survey to scoff at those who have predicted a distant third spot for his party in the Delhi Assembly elections of December 4. “The Aam Aadmi Party will form Delhi’s next government,” Kejriwal says. The car grumbles as it negotiates the incline, as if to mock his certitude.

Just as the WagonR can’t trump an SUV, so it was assumed that AAP couldn’t beat the Congress and the Bharatiya Janata Party. A national daily’s bureau chief predicted AAP would not get a seat; another thought it was just a middle-class phenomenon; a correspondent of a Japanese news agency did not mention Kejriwal in his curtain-raiser on the election until he was asked to by his bosses in Tokyo.

AAP stunned all to pick up 28 seats. If the defining trait of all icons is to achieve what is deemed impossible through original methods, in 2013, Kejriwal took on the rulers, spoke against crony capitalism, and made people wonder whether India’s was a democracy or psephocracy, all in his own original aam aadmi avatar. His politics was predicated on reviving the original concept of the Indian state—that it can’t abdicate its social responsibility.

The sheet he was singing from was not radically different from that of others. Yet Delhiites believed him. He had entered politics to serve the people, they said, for money he could as well have made as an income tax officer. And it helped a great deal to be the untainted outsider—no political pedigree to speak of, no notorious history and a brand new party to start with. He was, so to speak, like the common people—an “insignificant man”.

Kejriwal must understand that reciprocity is the foundation of any relationship, even between icons and followers. Take Punjab, for instance, which no longer ­engages him.

Once at the helm in Delhi, Kejriwal furnished proof of his intent. He won the admiration, for instance, of slum-dwellers who were not, in the 49 days of his governance in 2014, visited by police and civic authorities demanding bribes. Their experience was heady, unprecedented. They bonded with Kejriwal in the manner followers often do with icons—with an enduring faith and a propensity to forgive when they disappoint. And he did disappoint, by resigning as chief minister.

Achieving the extraordinary is vital to become an icon. No less is courage in adversity. In the summer of 2014, Kejriwal was jailed for his ill-advised move to furnish bail bonds; there was a concerted move to remove him from the party’s helm. Riding the crest of popularity, it was thought the BJP, under the leadership of Prime Minister Narendra Modi and Amit Shah, would split AAP to end its story prematurely.

But AAP remained united, its leader as deserving of plaudits as their MLAs. Kejriwal went around apologising to Delhiites for deserting them. They gave AAP 67 out of 70 seats in the February 2015 elections, gifting Kejriwal, in the process, the bragging rights of being the leader who handed out to Modi the first defeat of his political career.

Performance was not such an issue for Kejriwal, who slashed power and water tariffs as soon as he became CM of Delhi for the second time. The challenge before him was deeper—how to use power to compel big interests to fall in line, to not let the corrupt system perpetuate.

It was then that the Modi government moved to hem in Kejriwal. Whether its motive was to avenge the 2015 defeat or nix future competition, we can’t tell. But the BJP is certainly guilty of invoking the Constitution to contain the AAP. This is evident from the recent Supreme Court verdict declaring that the Lt Governor, the perpetual antagonist in the AAP story in Delhi, must act on the aid and advice of the chief minister.

In opting for the course of confrontation, the central government provided Kejriwal ample opportunities to generate engaging stories. None as significant as the ­Lt  Governor stonewalling or delaying the AAP government’s policies designed to assist the masses—from mohalla clinics to education loans, from doorstep delivery of food ration to disempowering the anti-corruption bureau. 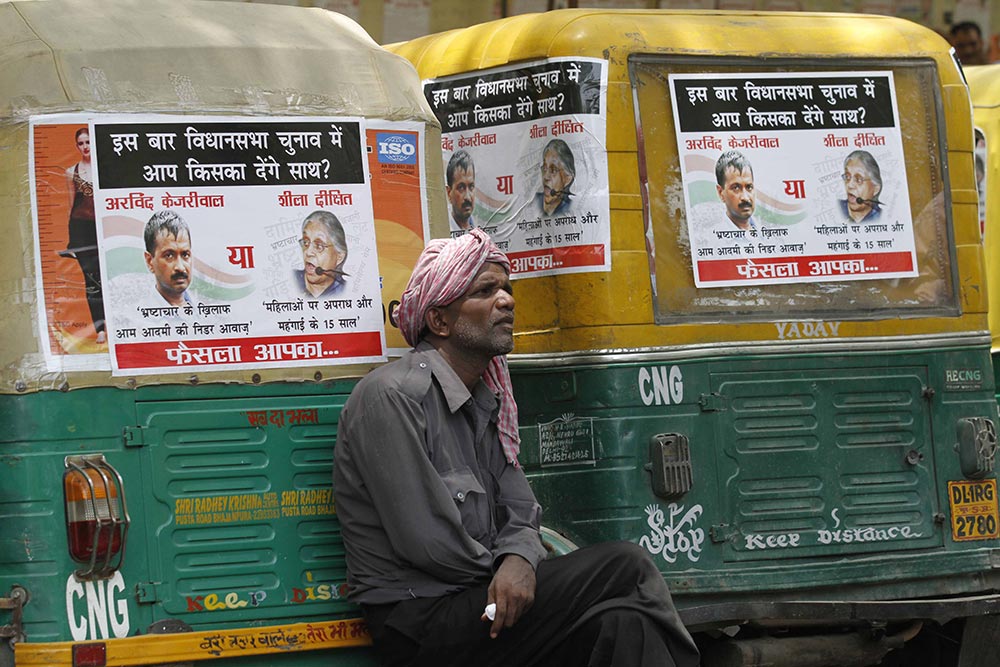 AK’s posters on New Delhi ­autorickshaws back in 2013

The confrontation only strengthened the identification of the masses with Kejriwal. After all, wasn’t his fate similar to what the real aam aadmi—the lower classes—experienced daily? The absence of networks of power to promote interests, rules invoked to deny what you think is your right—could the aam aadmi be crushed this way even as CM! Kejriwal and co did not silently acquiesce, of course. They incessantly launched sallies against Modi, buzzing as hornets do when disturbed.

A fight between unequals charms most. But not the middle-class, which is culturally approving of hierarchies. Self-interest demands the status quo to stay intact. It’s a class that is, to quote the French novelist Leila Slimani, “at once servile and authoritarian. Doomed to be cowards.” The middle-class fatigued at AAP’s passion for battles.

The middle-class had started the rethink ever since Shanti Bhushan, Prashant Bhushan and Yogendra Yadav were ousted from the party in 2015. They were miffed because they wanted a party like AAP to accommodate dissidents. But dissidence of what nature? One cannot call Shanti Bhushan’s endorsement of Kiran Bedi, the BJP’s CM candidate, a fortnight before the polling day mere dissidence. It was plain sabotage.

In much the same way, Kumar Vishwas is out in the cold now. His isolation began when he invited national security advisor Ajit Doval to his birthday bash in February 2016. In AAP circles, Doval is among those blamed for its troubles. Doval’s presence at the event was communicated to Kejriwal when he was on the road. Provoked, he did a U-turn and returned home. Vishwas also thought poorly of AAP’s leftward lurch, perhaps believing that only a right-wing secular entity could take on the BJP, not necessarily a fallacious proposition.

These departures from AAP have created the impression that all decisions in the party are Kejriwal’s. “Arvind, you are the party,” responded a former Lt Governor to Kejriwal, who told the former that his surprising request for a Rajya Sabha seat will require the consent of other leaders. No boss can ram through a ridiculous idea in any party.

No, not even Kejriwal. In the weeks before the Delhi elections, Kejriwal was reluctant to give an interview to a national daily with multiple editions. AAP’s 15-member Delhi Campaign Committee protested. A vote was called for—Kejriwal was in the minority of one. He relented, as he did to the overwhelming feeling among party leaders to call off the recent sit-in at the LG’s residence. Obviously, Kejriwal has his way on certain issues. Whether in a party or a private company, only a feeble boss always opts for consensual decisions.

Kejriwal must understand that reciprocity is the foundation of any relationship, even between icons and followers. Take Punjab, which no longer engages Kejriwal, on whom the state had showered affection not long ago, during the election campaigning, the crucial election the party lost. Kejriwal had wanted a full-fledged state to demonstrate to the country the possibilities of good governance. Though AAP’s hopes were shattered, it emerged as the principal opposition party. His attitude towards Punjab is of a jilted lover. His response may be human, but it’s not political: icons too must overcome their disappointment with their followers.

Ajaz Ashraf is a senior journalist based in New Delhi

Sonia Gandhi: Legend Of The Renunciate | By Shashi Tharoor