Next time round, don't write off that wandering instrument as just another writing stick. Pens are big business now and pen-pushing a whole new art. Liberalisation and literacy are only helping the cause. 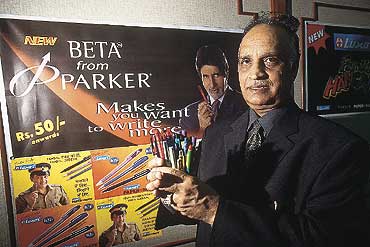 outlookindia.com
-0001-11-30T00:00:00+0553
This year the Big B, even without kbc, has had a lot to smile about. So have his star-struck fans who have rushed out to buy a part of Amitabh for Rs 199. For those who didn't get the deal, it is the Parker Beta Pen (a limited edition signature series) imprinted with Amitabh Bachchan's photo and autograph that we are talking about.

While some say the lucky charm that has gotten the Big B riding high on his brandwagon is his white goatee, others mutter that the rumoured Rs 5 crore endorsement from Parker must have helped him sign cheques to write off long-standing debts—smoothly. But for the higher-rolling ballpen industry, Bachchan has only been the latest in their star cast. And like every other blockbuster in India, filmstars as models in pen commercials feature in almost every newspaper, cinema, television, paper and magazine in India.

Papermate, America's largest selling ballpen, has been clutched for the cameras by mover and shaker Shekhar Suman. Sachin between matches and deals has made time and money on Add Gel. Javed Akhtar has used penmanship as a metaphor for Champion(s), While Raveena Tandon and Karishma Kapoor have signed and sashayed on the dotted line for Today's Pens exhorting viewers to go get their own by tomorrow.

All of which collectively is enough to make you stop by a stationery shop to check out...the writing on the wall. Where once there was only scratchy, writer's bump-inducing Wilson in the sixties, now there is enough for Rs 10 and under to make you reach out for your sunglasses. From neon to frosty, you can buy a fistful of jotters that come dressed in executive suits, muted wrappers or sleek see-through bodies. Many ballpens have soft sleeves, easy grips and even non-slip socks that keep your fingers from sliding off!

Notch up the budget by a couple of tenners and you can start sniffing ink that is scented. Or you can test yourself for colour blindness while considering Pilot's microtips with shades of turquoise and teal inks. Or just go for gel pens that have successfully wooed fountain pen users with their "ink type feeling and effect" without the bother of having to tank up and wipe off thrice a week. Not to mention that unlike fountain pen nibs that reflect the quirks of their owners and when borrowed return wrecked by different user pressure, gel pens remain unaffected by hands of lenders and borrowers. Stretch gel pens, filled with twice the ink, go double the distance in performances which are measured in kilometrics.

Right then, when you think you have your hands around the entire market, you realise your fist is either half full or empty. Of the Rs 1,500 crore 'writing instruments' industry (which is how the pen manufacturers' collective terms itself), 40 per cent of pens belong to the unorganised, unbranded segment, says Jagdeep Kapoor, chairman of Samsika Marketing Consultants. And it's these faceless, brandless 40 per cent that stunt the average price per pen in India to a low bench price of Rs 2. To put that fact into perspective, Mont Blanc, one of the top-end international brands, retails a Limited Edition Carl the Great fountain pen at Rs 3 lakh (plus 8 per cent tax).

It was a Supreme Court directive in the eighties that perhaps did in the fountain pen, mentioning that ballpens could now be used to sign cheques. Responding to public demand, banks started putting out their own pens on chains or strings for customers to use on a write-and-return basis. Then came the courier companies who sent out their delivery boys equipped with the cheapest writing stick available. Soon followed the men with pink, yellow or green recycled paper slips in parking lots, who jotted down your time of entry and car number with alacrity—before you could find parking.And finally there was the office administrator from whose grasp you need to wrest your rightfully-ordained pens! Shyam Gupta, ceo, eofficeplanet.com, an eProcurement and distribution platform, lets out a tiny fact: pens account for 5 per cent of their total turnover of office supplies bought online and offline.

And it is the masculine narration right from the cheque-ered beginning of the wandering instrument, that makes you wonder whether pens are solely male-identified? Has it been created only as a left breast-shirt pocket thing for men? Has any pen-maker considered creating a pen that slings along a saree or swings from the end of a dupatta? Or will women's pens have to wait for shirt manufacturers to make shirts that will be sold on the strength of strategically-placed pen hooks?

Public spaces in which pens pop up make Rathin Roy, an economist with the University of London, comment that "pens in India shouldn't just be considered as a private property, they should also be considered as public property. They are a function of the form-filling an Indian citizen has to go through—from applications for ration and election cards, passports, train and air reservations and while banking and almost any form of interface with the government". With lightning-quick mathematics he adds: "Let's assume that 100 million people fill one form a day, that is 5 million forms daily, and 110 million a month." That makes for zillions of pens being put to countless reams of printed paper everyday.

D.K. Jain, chairman and president, Writing Instruments Manufacturers Organisation, India, estimates that the public sector consumes 5-10 per cent of the total pen production in our country. When wearing his other hat as chairman and president of Luxor Writing Instruments, Jain adds a punchline: that Luxor alone produces over one million pens a day.

Don't blame it on liberalisation, that usual suspect for all markets booming. There is also the emerging aspect of literacy, when you head out to touristic hot spots in India, where "Hallo pen! Hallo pen!" is the clamouring, hand-held-out anthem of dirt-poor children, that has replaced the earlier "bakhshish, bakhshish". It's a chorus that echoes from Khajuraho to Konarak and Ajanta to Hampi, where busfuls of foreign tour groups in high season arrive more regularly than the rations.

For territories like these, mapped largely by upmarket travel agents like Cox & Kings, travel advice to dollar-donating tourists is that the best baksheesh to "poor kids" is either a pen or candy, rather than a dollar or pound equalling Rs 50-70, says Varun Gupta, GM, operations. The choice made by most dentist-fearing tourists is pens over candy. And with each batch of pens handed out, the screaming has steadily been getting more strident each season.

By the end of this year the shouting might be at an earsplitting all-India level, with the tabling of the 93rd Amendment Bill in December 2001, that makes education compulsory for all children from age 6 to 14. Decibel by decibel, this will be a din, welcomed by the writing instruments industry. Because the nice thing about literacy (the ability to read or write in any language) is that it lends itself beautifully to a market of all languages, ages and either sex. The industry expects the market to grow by as much as 35 per cent per year. From this, advertising agencies expect to rake in at least 15 per cent.

According to the last nhfs or the National Health and Family Survey of 200 million children in India, 158 million are going to school. The figures from the 1991 census say 3,59,324,000 people in India are literate. The average pen usage per person is 10 a year in urban India and one in rural areas, which adds another profiteering unit to that last figure.This and the 93rd Amendment has managed to bring the widest smile ever to every writing instrument maker's face in India.

For unlike cigarette-makers whose target is to make every bidi smoker aspire to their brand, pen manufacturers have no competition with chalk. After all, it is black slates and white chalk that spell out the beginnings of business for the pen industry. More so when the age at which children are converting to ballpens is down to age 9 from age 15 in both rural and urban Indian schools. And it's these children who when they turn literate, will rewrite our history as the Pen-Carrying and Refill-Using Republic of India.