The train of events that ripped the city's lifeline 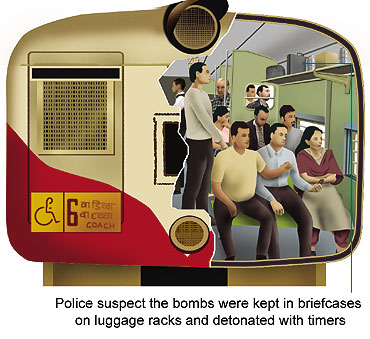 Mumbai's rail network is divided between the Western Railway (WR) and Central Railway (CR). While WR runs between Churchgate and Virar, CR has two services, Main Line and Harbour Line.

The total number of daily commuters is close to seven million, according to analysts. The actual load of passengers is between 4,000 and 5,000 persons per train. The average time gap between two local trains at terminal points is around four minutes.

Tuesday's blasts happened in first-class compartments of trains on the WR, after they had crossed Dadar on the way to Virar from Churchgate.

LeT: Pakistan-based banned terrorist outfit which continues to function under names like Jamaatul Daawa. Responsible for militancy in Kashmir.

SIMI: Students Islamic Movement of India, started in Aligarh in '77, it's now banned. Allegedly behind the March 7 Varanasi blasts. Has links with the LeT.

The Timeline of A Scarred City

Mar 12, 1993 A series of bombs ripped through 13 places in the city, killing 257 people, injuring 713. First blasts to use RDX, allegedly plotted by Dawood Ibrahim.

Dec ’02, ’06, 2002 Two killed and 31 injured when a bomb exploded in a best bus outside Ghatkopar railway station. Four days later, another went off in Bombay Central, injuring 25.

Jan 27, 2003 One killed and 30 people were injured when a crude bomb planted in a bicycle exploded in a packed market outside Vile Parle railway station

Mar 13, 2003 Eleven people were killed and 65 injured when a powerful bomb exploded in a 'ladies special' train when it was entering Mulund station at peak hours

Aug 25, 2003 Two blasts occurred one after the other at the Gateway of India and Zaveri Bazaar, killing 46 people and injuring more than 160. RDX was planted in taxis parked at both these places.

Then It Rained Morbid