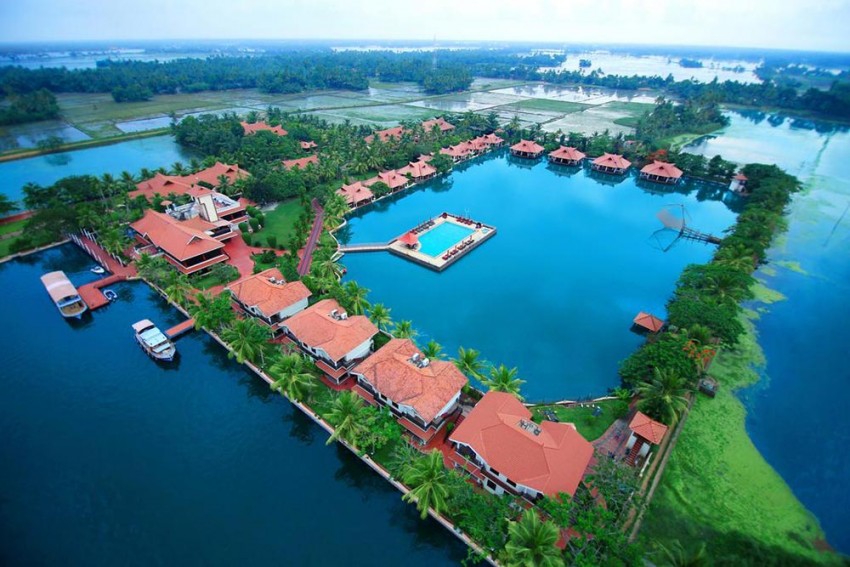 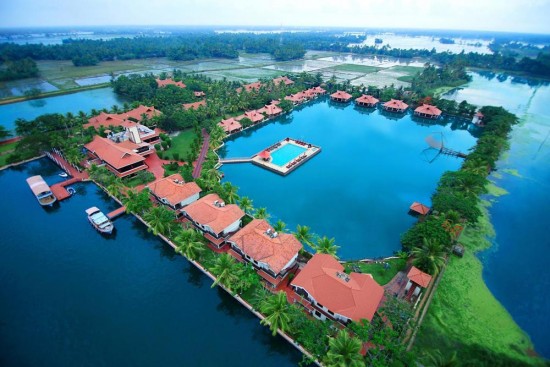 For a while now, Kerala chief minister Pinarayi Vijayan has done well to recalibrate his tough image. The septuagenarian Marxist leader sports a softer smile more frequently than usual, hilarity makes a dash in his social media int­eractions—it was clear from the CM’s tweets during the BJP’s recent Jana­raksha yatra in his state. Even so, black humour seems chasing him no end.

The latest instance is that of a cabinet colleague of Vijayan’s having to quit. Tho­mas Chandy is the third minister in a year’s time to resign from the Pinarayi government, formed in May 2016 after the Left combine won with the poll slogan Ellam Sariyakum (Everything will be alri­ght). If public criticism stung the preceding Congress regime defined by stinking tales of corruption, the same menace has already brought major embarrassment to the current dispensation. It seems to be rapidly losing plot after assuming the high moral ground.

Vijayan, 72, did try to be unfazed, virtua­lly tweaking his grin to benignity—in ret­aining scam-stained Chandy of the NCP. It took the Marxist party’s chief coalition partner CPI to use pressure tactics to ensure the 70-year-old transport minister de-boarded the power chariot. It’s not just regarding Chandy that Vijayan got flak, there’s condemnation over the way he is handling another high-profile case. It’s over the probe into a ‘solar scam’ centering around ‘conwoman’ Saritha S. Nair targeting Congress veteran Oommen Chandy, who was the CM.

The just-exited minister allegedly used the money of taxpayers to lay a road to a private resort in which he had business interests. That wasn’t all.

The NCP’s Chandy, a businessman-­turned-politician, was the richest in the Pinarayi cabinet. He did get the sack on November 15, but questions linger over an inordinate delay in the exit of the minister who allegedly grabbed land. (The earlier two ministers fell on charges of nepotism and sexual harassment.) Cha­ndy had taken over as minister from party colleague A.K. Saseendran, 71. That was on April 1, after Saseendran resigned following a TV channel airing his alleged sex chat with a journalist. Before that, in mid-October last year, E.P. Jayarajan was removed as minister of industries, commerce and sports when the senior CPI(M) leader was found to have employed his relatives in key positions in PSUs.

So, what led to Chandy’s exit? Well, he has been accused of reclaiming the Mar­thandam backwaters on which sits his Lake Palace Resort in Alappuzha, thus violating the Kerala Conservation of Paddy Land and Wetlands Act. Alappuzha distr­ict collector T.V. Anupama’s final rep­ort confirmed the minister’s appro­pri­at­ion of government property and encro­achment on the backwaters, making untenable his continuing in the ministry. Known for his brazen ways, Chandy moved the Kerala High Court, seeking action against the collector’s “baseless allegations” against his Water World Tou­rism company. He wanted the report quashed. The plea was dismissed; the judges even asked if a minister can file a case against his own government. Earlier, on November 4, a vigilance court in Kottayam had ordered a probe against the minister on an advocate’s complaint that Chandy had constructed a road to his res­ort by rec­laiming 2.5 acres of paddy fields, flouting conservation norms.

Political pundits feel that Chandy should never have been inducted into the cabinet in the first place, far from trying to shield him amid claims of corruption. As someone with business interests in both West Asia and India, he has had a shady past. Old-timers in Kuwait recall Chandy in the 1980s running a small cassette shop in the tiny Arab country, desperately looking for a job. During the 1990-91 Gulf War, when Malayalis were fleeing, he struck gold. One version says Chandy stayed back and kept an eye on the schools that a friend had asked him to—and quietly took them over. Also rife are newspaper stories that charge him with siphoning off huge sums of money in the early 2000s from the Indian School his compatriots ran in Kuwait. Allegedly, Chandy was convicted, but he managed to escape imprisonment in Kuwait and flee to India, after paying a fine. Chandy now has four schools in the Gulf and investment in hotels and hospitals in India.

Among them is the Lake Palace Resort close to his native Kuttanad (also his constituency). The controversial road to it was laid using tax-payers’ money: MP funds of P.J. Kurien (Congress) and K.E. Ismail (CPI). Thus was raised the land and a mudroad through the paddy fields. It caught the attention of the media when Rs 28.5 lakh of a Harbour Engineering Fund was diverted to tar the path. (Earlier, visitors had to take a boat to the resort.) Chandy also enjoyed luxuries abroad at public expense, claims Malayalam daily Mathrubhumi, pegging his medical treatment in the US at Rs 1.9 crore. 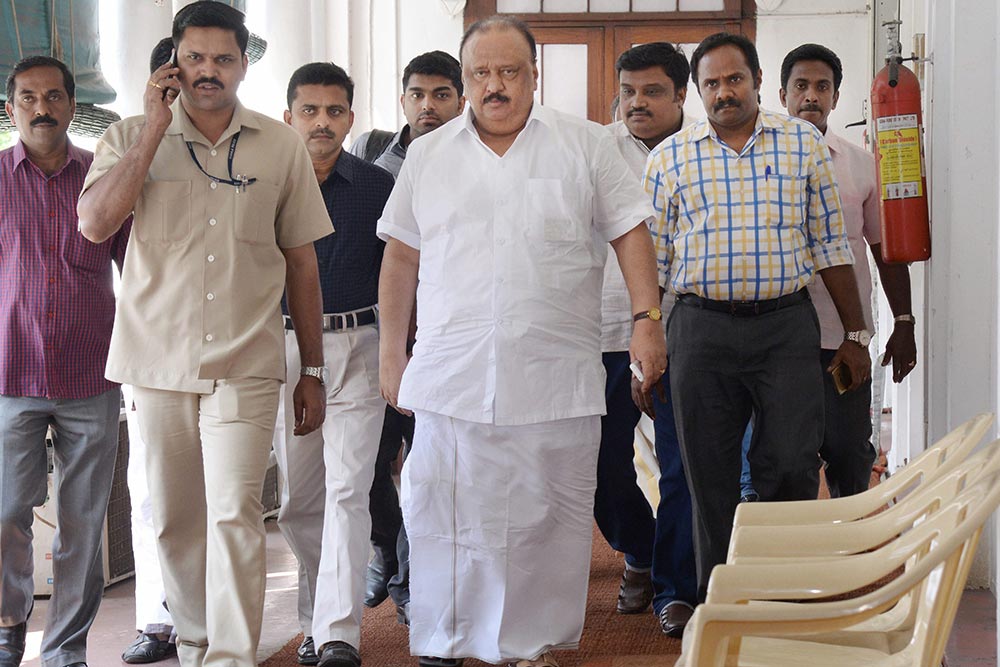 Vijayan’s foisting Saritha of the Team Solar scam as virtually a victim wronged by the previous government, too, earned him people’s flak. After all, the woman faces no less than 33 cheating cases. A panel was tasked with probing the 2013 scam where a fraudulent energy firm used two women to create high-level poli­tical contacts and dupe ‘investors’ to the tune of Rs 7 crore. It finally came up with a badly-edited report revelling in sleaze. The ‘shoddy’ work by the Justice G. Siva­rajan commission gave the CM’s critics further fuel to suspect Vijayan of allowing Saritha to run loose.

This Prop Saritha mission will haunt the LDF, according to ex-CM Chandy. “The Left is very well aware of her and she has previously made statements against them,” he tells Outlook. “They have recei­ved her treatment before and yet they are carrying her along.” Saritha had previously, without batting an eyelid, told the media that Jayarajan, who is a trusted lieutenant of Vijayan, had offered her Rs 10 crore to pull down the Chandy government. On another occasion, she said her former partner Biju Radhakrishnan, now serving jail time for murdering his wife, was close to the CPI(M) state secretary Kodiyeri Balakrishnan. Photograph by PTI
Ex-CM Oommen Chandy says Pinarayi Vijayan’s bids to ‘prop up’ a key accused in the solar scam is going to haunt the ruling front for long.

Oommen Chandy, throughout his 2011-16 tenure as CM on a wafer-thin majority, had to deftly manoeuvre rebellion within his own United Democratic Front and even within its chief constituent, his Congress party. So the solar scam breaking out after Saritha’s arrest in June 2013 brought out instances of her having infiltrated the CM’s office and being in touch with Chandy’s closest aides.

That was Oommen. Now, it’s Thomas. People wonder what kind of magic spell the transport minister could hold over Vijayan, going by the way the CM shielded his cabinet colleague for months before asking him to resign. Advocate A. Jaya­sankar, an outspoken political analyst, says Cha­ndy has entertained political leaders from across the spectrum at his luxurious 14-acre resort by the scenic Vembanad Lake. “None is sure about the kind of secrets Chandy knows. He must have generously doled out funds to all parties,” Jayasankar tells Outlook. “He’s the type of person who will openly talk about it if he has to resign.”

The Lake Palace Resort lies not far from a pocket that witnessed a Communists-led peasant uprising in 1946. Seven deca­des later, the CPI(M)’s aspirations seem light years away from the original spirit around the red-painted Punnapra-Vayalar martyrs’ mem­orial. Not surprisingly, the local people are angry that the party is protecting the rich.