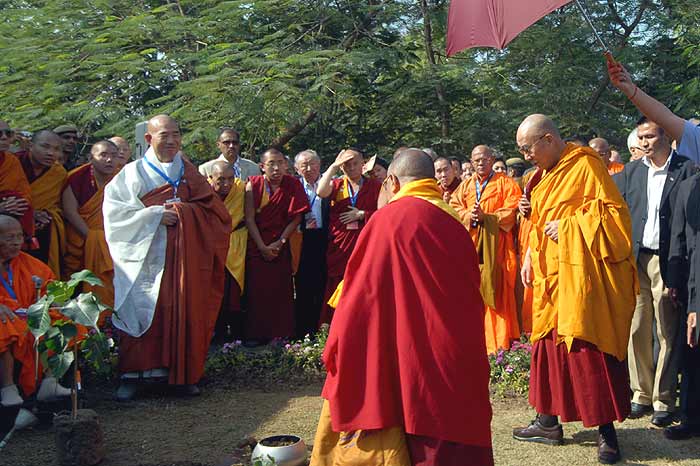 In The Buddh Circuit

The soothing Buddhist chants reverberating through the lobbies and halls of New Delhi’s hotels, and the constant reiteration, during talk sessions held under glittering chandeliers, of the words peace and harmony, could not dispel the cloud of controversy hovering balefully around the Global Buddhist Congregation 2011. The grandest Buddhist gathering that Delhi has hosted in over half a century, bringing together 900 delegates from 46 countries—major strands from all the hues in the vibrant Buddhist colour palette, from turmeric yellow to rich maroon— was billed as a gathering of religious figures timed with the 2600th year of Buddha’s enlightenment. And in terms of format and content, it certainly was. However, it was plain, from many off-session conversations with delegates, that the four-day conference that ended last Wednesday was shot through with a keen awareness of matters political.

It could hardly be otherwise, given the time-tabling disaster that had preceded the event. The unfortunate overlap with scheduled high-level border talks with China in Delhi handed Beijing an opportunity to stoke up a row over the Dalai Lama’s presence at the Buddhist gathering, which eventually led to the talks being postponed. More to the point, from the perspective of those attending the meet, the row ended up lowering the prestige of the event; taking the fizz out of the beer, as one analyst put it. Even though this was not a Dalai Lama-centric but a pan-Buddhist event, and no Indian vvip was to share a dais with the Tibetan leader (his role was to deliver the valedictory address), the president and PM skipped the inauguration to defuse Chinese anger. The organisers, Asoka Mission, who had widely advertised the fact that these dignitaries would attend, were left looking rattled—and the congregation, nonplussed.

Dr Ashin Nyanissara, a senior monk from Myanmar, gave frank expression to what many at the event seemed to be feeling. “The Chinese dragon is shouting, the Indian lion is going underground,” he said. He went on to ask sceptically, “Will the Dalai Lama speak?” and when assured the Tibetan leader and Chinese bete-noire was certainly slated to do so, declared with a flourish, “Then I will say sadhu (well said).”

The Dalai Lama’s participation, indeed, rescued the event. And there was powerful symbolism in him sitting right at the centre of a stage, flanked by Buddhist prelates from various nations—many of them, significantly, nations in China’s own backyard, who have been expressing their disquiet over Chinese assertiveness.

That India has woken up to the geopolitical and soft-power benefits of boosting its profile in the Buddhist world—in particular, the Buddhist countries in the India-China neighbourhood—is evident from the energies it expended on the conference. Though fronted by the Asoka Mission—a private body headed by Lama Lobzang, a diminutive Ladakhi monk, well-networked with Indian officialdom—the initiative had the invisible weight of the MEAs public diplomacy division behind it. That translated into a generously funded effort to bring the Buddhist world to India, with air-fares, five-star accommodation and pilgrimages on the Buddhist circuit thrown in. To project India as the site of a purposeful, unifying Buddhist initiative, a new organisation, the International Buddhist Confederation, was launched at the meet.

This is not India’s first foray into Buddhist diplomacy. Indeed, it mimics a previous, rather more successful effort, illuminated by the charismatic presence of Nehru, to mark the 2500th year of Buddha’s birth in 1956 (differing dating conventions account for the slight chronological mismatch). In recent times, however, it is a China freed from ideological adherence to Communism that has taken the lead in projecting itself as patron and sponsor to the Buddhist world. It has hosted two high-profile World Buddhist Forums in 2006 and 2009 (delegates at the Indian meet who attended these narrate tales of “Olympic-style” arrangements, specially built venues, red carpets everywhere, and highways being blocked for the progress of monks). It has also extended largesse to many Buddhist projects (even in India, where it has pledged a million dollars to the plan to rebuild the Nalanda University).

Its most ambitious venture, however, and one of considerable concern to India, is the $3-billion project proposed by a Beijing-linked organisation to develop the Buddha’s birthplace, Lumbini, in Nepal, into a focal point of Buddhist pilgrimage and tourism. India’s anxieties were evident: earlier this month, it also staked its claim, through ICCR president Karan Singh, to a role in developing Lumbini. Indian mandarins claim that Kathmandu has agreed to cut Chinese links to the project, located right on the Indo-Nepal border, under Indian pressure, but Nepali sources told Outlook the reality is more complex and uncertain. There is the influential local backing for the project (especially by former Maoist PM Prachanda) and China’s growing influence to consider. 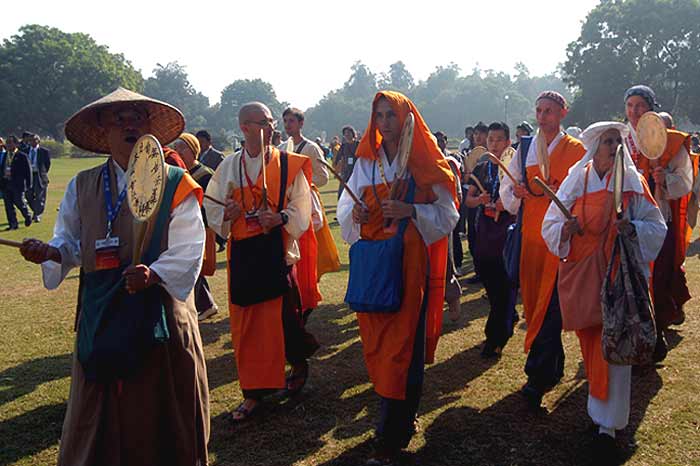 Tibetans pray after a tree-planting ceremony at the congregation. (Photograph by Tribhuvan Tiwari)

As with India—clearly looking to counter China and gain greater influence in its backyard, while at the same time exploiting the economic and PR potential of engaging with the Buddhist world—China is also moved by a mixture of political and promotional aims. In the first category, the T-word, Tibet, looms large. “It is no coincidence,” points out Dibyesh Anand, associate professor of international relations at the University of Westminster, “that the first state-supported World Buddhist Forum in 2006 occurred at the very time China sought to assert its control over the reincarnation process for choosing Tibetan spiritual leaders.” China used both the major Buddhist forums it hosted to parade its choice—the poorly regarded Panchen Lama—with the ultimate aim of influencing the succession to the Dalai Lama.

Another objective, says Prof Robert Barnett of the Weatherhead East Asian Institute at Columbia University, “is to pointedly exclude the Dalai Lama from Buddhist forums”. (It is easy to see, therefore, why an Indian-sponsored Buddhist forum giving prominence to him is infused with subtle powerplay.) He says he wouldn’t be surprised to see Chinese moves to try to exclude the Dalai Lama from the Nalanda project too. The softer goal is to use the international resonance of Buddhism for image-building. “While China may talk endlessly about Confucianism,” says Barnett, “it is Buddhism it uses to promote respect for China as a civilisational force.”

Against China’s clout, resources, efficiency and headstart, what does India have going for it? There are, of course, the obvious facts of history and geography (three of the four holiest pilgrimage sites for Buddhists—Bodhgaya, Sarnath and Kushinagar—are in India, and Lumbini is just across the border) that were ritually invoked by both hosts and guests at the Indian Buddhist meet. There is also, as Anand points out, India’s own T-factor: “The Dalai Lama’s constant references to India as his spiritual guru, and his tributes to its diversity, have done more for the image of India among Buddhists than any government could ever do.”

“India has to realise the value of Buddha’s heritage for it to play a convincing role in the larger Buddhist space.”
Shantum Seth, Buddhist

Barnett suggests that India, with a more subtle and nuanced style, has advantages in the use of soft power that China doesn’t: “Culture should not be seen as a government-promoted weapon, that is the very essence of soft power.” Interestingly, there were echoes of that argument in conversations with delegates at the conference, among them regulars on the China conference circuit. Said the Burmese monk Nyanissara bluntly: “China uses money to get Buddhist leaders from everywhere.” Tran Ngoc Thao, vice-rector of the Vietnam Buddhist University, added, “The conferences in China are a platform for the Chinese government to become a forerunner in world Buddhism.” The delegate said frankly, “It would be a good thing if India organises more such conferences, it would help us resist the pressure of China.”

However, the flipside of most compliments paid to India was the almost overwhelming outpouring of distress by delegates at Indian mismanagement and neglect of the Buddhist pilgrimage circuit. The same points came up again and again: poor infrastructure, connectivity and transport; not enough involvement of Buddhists in the management of the holy places; poorly trained guides with no sense of what Buddhism is; a ‘tourism approach’, rather that one respectful of the ethos of a pilgrimage; no proper policy on the management of Buddha’s relics in India. Shantum Seth, a practising Indian Buddhist who also runs tours on the pilgrimage circuit, acknowledges that there is justice to many of them. “India,” he says, “has to realise the value of this heritage before it can play a convincing role in the larger Buddhist space.” Clearly, if India wants to soar in the Buddhist world, it needs to do something about its launching pad.

By Anjali Puri with Pranay Sharma