It’s time we extirpated the horrific dehumanisation from our prisons 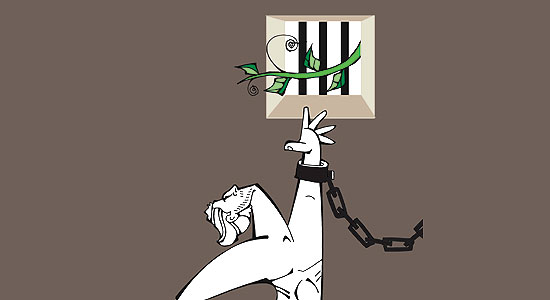 Ashutosh Asthana, the key accused in a fraud involving the judiciary, died a few days ago in a Ghaziabad (UP) prison. The bazaar rumour is that he died of poisoning. Whether he took the poison himself or was tricked into doing so will be known after the inquiry ordered comes to a conclusion. Two other incidents of past weeks were equally shocking. A murder accused sentenced to life  hanged himself in Coimbatore jail, and a software engineer locked up after a complaint of dowry harassment against him similarly ended his life. Finally, an Indian student detained in a US prison for sending intimidatory mail to President Bush, has complained of being roughed up by fellow prisoners. Life inside prisons is undoubtedly perilous. This may not be a new phenomenon, but the public now is more aware of what goes on inside prisons. As sensitive human beings, our conscience should lead us into doing something radical to reform our prisons, cure it of its present ills. As someone said, a nation will be judged by the manner in which it treats its prisoners. I would like to recall a national leader incarcerated during the Emergency telling me how soul-crushing detention could be. He was not surprised that many jailed along with him chose to plead for mercy and walked out at the earliest opportunity.

Prisons infuriate me for various reasons. Firstly, there are dubious arrests by the police and the even more galling convictions by courts on false cases, sometimes trumped up by the prosecution, and which end in innocent persons being sent to jail. The notion that many who should be in jails are outside, thanks to political and economic clout, is not wholly baseless. What, then, is the justification of locking up many who are guilty of minor infractions? Secondly, rampant overcrowding of prisons is a matter of disquiet, and of concern worldwide. States in the US keep on building new prisons, although demand quickly outstrips available space. Too many prisoners means abysmal and morally repugnant conditions. Most unjustly, the number of undertrials far exceeds convicted prisoners. Many of the former end up spending time that surpasses the maximum period for which they could be convicted under the law, if found guilty at all.

The corruption that afflicts prison management is of Himalayan proportions. This is first reflected in the quality of food served to inmates, and attributed to malpractices in the award of contracts to suppliers of grocery. When food is inedible, prisoners revolt. Some bribe guards into getting something better from outside. Smuggling in of drugs into prisons is not unusual. Detainees use cell phones freely. All these are for a price, and the rates vary from prison to prison. But these are lesser evils, if one reckons the violence that is routinely perpetrated—both by prison staff and fellow prisoners—on a few hapless prisoners who stand out from the rest for some reason, be it the nature of their crime or their efforts at good behaviour. Abusive prison guards just do not enjoy their work and are clearly frustrated at the stultifying work environment. Some thought has been devoted towards improving their conditions of service. Whatever has been done till now has not exactly improved their morale.

Of course, there are some remarkable individuals in the system who are trying to make a difference and have actually succeeded. The legendary Kiran Bedi made a world of difference to Tihar, one of the most notorious prisons in the world. A commendable focus on literacy and health issues altered the scene. Union home minister P. Chidambaram had a few good words to say about Tihar during his recent visit there.

I had the good fortune to go round the Sabarmati Jail in Ahmedabad recently. This is a historic jail, built in 1895, where the Mahatma, Lokamanya Tilak and Sardar Patel had all been detained. It is a clean place, although it is also overcrowded (nearly 4,000 inmates in a place meant for half that number). A young IPS officer, Chandrasekhar (an agriculture graduate from Coimbatore), and his equally enthusiastic IGP Keshav Kumar deserve every bit of praise we can shower them with for their devotion and care. Their latest innovation is in the area of telemedicine, with the support of the local Apollo Hospital. It has been a boon for prisoners needing expert medical opinion. Online examination of medical records and consultation with specialists for prisoners have the potential for saving many lives. How many in our political firmament understand that a prisoner’s life is as precious as theirs? As long as it is possible for the criminal justice system to make flagrant mistakes and lock up innocent people, we need to look after our prisoners with the utmost benevolence. Nothing else can act as testimonials of our urbanity and humanity, the two qualities that are in danger of becoming extinct.