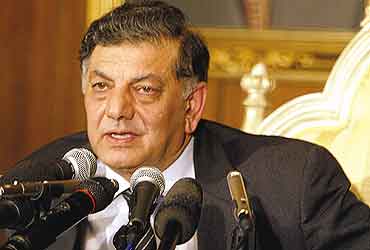 outlookindia.com
-0001-11-30T00:00:00+05:53
When foreign secretary Riaz Khokhar stepped out, on October 29, to respond to India's 12 confidence-building measures (CBMS), one hoped Pakistan would behave sagely. For a fleeting moment one felt the light breeze of optimism as Khokhar intoned: "These (India's CBMS) are piecemeal proposals and not real issues. The Indians could have been doing it for public relations." But Khokhar was not deterred from imposing impossible demands on India through a remarkable display of PR. Soon, it was clear New Delhi and Islamabad would lapse back into snarling at each other.

Khokhar's conference has jeopardised the durability of CBMS. It was in April that A.B. Vajpayee offered what Islamabad calls the "suspended hand of friendship". His Pakistani counterpart Mir Zafarullah Khan Jamali, with the blessings of the military establishment, responded positively. But India pondered for five months, suddenly springing alive on October 22 through its 12 CBMS, and walking away with praises even from those who "can't tell the difference between Kashmir, terrorism and war".

Pakistan is evidently irked. Says former foreign secretary Najmuddin A. Shaikh: "The positive reaction to the Indian initiative and the extensive coverage it received in the western media was in stark contrast to the virtual ignoring, by the international community and the media, of the far more substantive proposals made by President Pervez Musharraf in his UN speech for a ceasefire on the LoC, a consequent lowering of violence in occupied Kashmir and the resumption of a composite dialogue."

It was believed India's proposals had mounted tremendous pressure on Pakistan, more so as Islamabad, after describing the 12 CBMS as "recycled", took inordinately long to spell out its response. Says Senator Mushahid Hussain: "I agree there was just no reason for this delay. India's initiative was a smart political move, more symbolic than substantive and deflecting western pressure on New Delhi to resume dialogue with Pakistan. Simultaneously, Islamabad was put on the defensive with the proposals aimed at winning public opinion in Pakistan, and among the Indian Muslims and Kashmiris. This also brings out the need here for some kind of a think-tank exclusively on India."

The need for a think-tank has been underscored largely because the foreign office, for a week after October 22, consulted many outside the government to fashion its response. In fact, Hussain was among those who was approached. As a former member of Pakistan's Kashmir Committee and one involved in the Lahore bus diplomacy, it was Hussain who mooted two of Pakistan's counter proposals: medical treatment and rehabilitation for victims of violence in Kashmir, particularly widows and orphans; and a special Lahore-Amritsar bus service.

Khokhar—widely acknowledged for his expertise on India and the supreme confidence Musharraf has in him—obviously led the consultation process. The General Headquarters, too, chipped in with inputs. Sources say the political establishment was scarcely consulted, and Jamali and foreign minister Khursheed Mehmood Kasuri were merely informed. These consultations were intense and prolonged, prompting the foreign office to cancel a press conference scheduled for October 28 at the last minute "to", as one official put it, "examine additional dimensions".

Among the security experts the foreign office consulted was Shireen Mazari, director-general, Institute of Strategic Studies. Advising Pakistan against shying away from the Indian "bombshell" of a bus service between Srinagar and Muzaffarabad, she, however, underlined the perils of allowing people to travel across the LoC on passports stamped with visas. Consequently, the idea of establishing UN checkpoints and documents was mooted.

Mazari is palpably delighted: "India's bluff has been called. Pakistan's response to involve the UN in this bus service has certainly put them in a bind." She laughs and adds, "For God's sake, you cannot just use the media to talk to each other. For implementing any of these proposals you need to talk, to negotiate and have a formal dialogue. You need to come to the table. If New Delhi is serious it will have to come to the negotiating table even on these 12 proposals." No wonder, some here say that Pakistan's response is a diplomatic equivalent of ICBMS, not CBMS.