Cauvery Gurgles Alongside The Still Alps

Melody and harmony hold respective keys to music in East and West. Their confluence is an Indian master’s track. 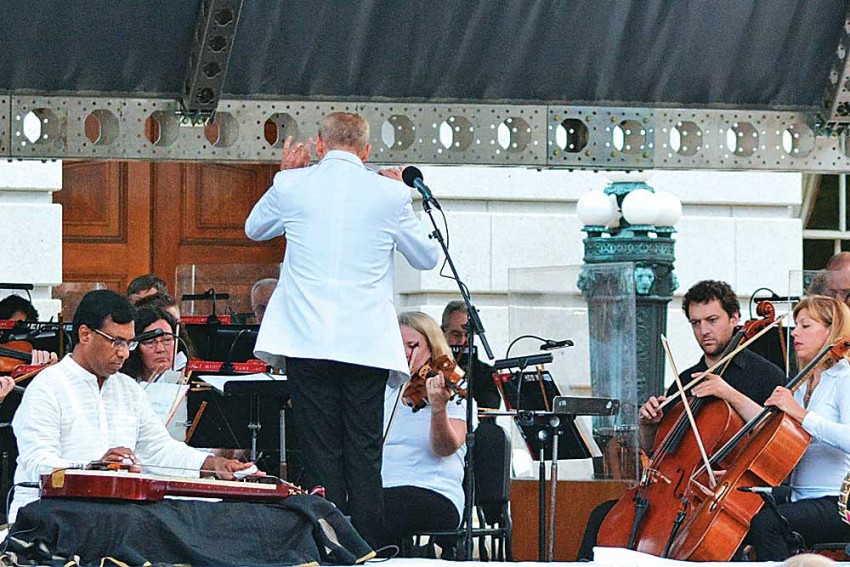 Blend
Melharmony, first staged in 2000, has been evolving into a system
Sreevalsan Thiyyadi June 22, 2017 00:00 IST Cauvery Gurgles Alongside The Still Alps 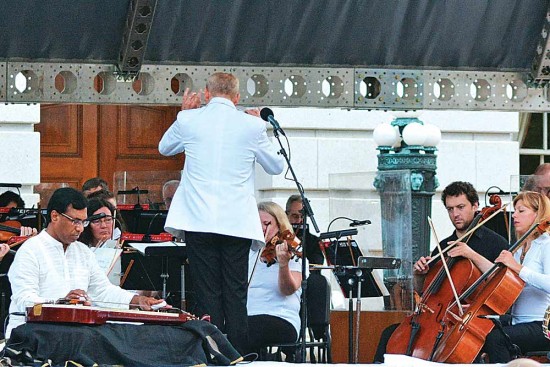 It’s a string quintet, but what the five Western instrumentalists play is a composition by the lesser-­known Karur brothers of southern India. The raga scarcely veers out of the parameters of Bangala, yet the presentation by the three violinists and two cellists is steeped in ethos pleasantly beyond Carnatic. Seated on a crescent-shaped line of chairs, they synthesise the two key elements that have largely segmented world music: melody and harmony.

The short and medium-paced composition Rararama is a contribution from three 19th-century Tamil siblings, who would perhaps never have thought their kriti would travel overseas; and what’s more, be treated in occidental style. All that’s happening now courtesy melharmony, which is both a concept and the name of a practical experiment. The melharmony approach defines chitra­vina exponent N. Ravikiran’s endeavour to blend melody and harmony. In other words, to preserve the whole logic by which a raga is created while bringing in western harmony.

This involves, essentially, not losing out on the distinct and vital musical species created by the linear succession of tones while also generating, at each INS­tant, extra waves of simultaneous frequencies. Bangala would allow an easier access to the western ear, being derived from raga Sankarabharanam, whose note sequences match the C ­major scale. But they’re not merely importing pre-learnt passages, for quite a few melody-types on the melharmony dais have a distinct Indian flavour: Nattai, Hamsadhwani, Saraswati, Hindolam....

Melharmony, quite unlike most fusion, is backed by long rehearsals of rigour. It’s no face-to-face, but one where the composer needs to have a deep vision of the music of both worlds.

It’s been only 17 years since the globetrotting Carnatic artiste came up with melharmony, but its repertoire and aesthetics have evolved by leaps and bounds. “It was a chamber orchestra, and we were a group of seven. I handpicked the fellow artistes and led the concert at the Millennium Festival in the UK,” recalls 50-year-old Ravikiran, who shot to fame as a precocious kid who could identify no less than 325 ragas and half that number of rhythmic patterns. The Chennaiite played his 21-string fretless chitravina in that unique collaboration with BBC Philharmonic: four Westerners, three Indians. The ensemble was among the five that were later called for a December encore, at the turn of the millennium, the culmination of a festival that featu­red as many as 2,000 shows.

Also a Carnatic vocalist, Ravikiran deb­uted in an international music venture as a teenager—in 1987, for an album featuring American singers Gary Wright and his wife Rose alongside Indian masters like L. Subramaniam and Vikku Vinayak­ram. Then on, it has been a long string of collaborations—with world artistes like American and Flemish blues veter­ans, jazz and slide guitarists, pianists, Chinese pipa players, saxophonists, folk singers, rhythm vocalists…. Each encounter enri­ched him, but Ravikiran occasio­nally sensed a repetitiveness in ‘fusion’. 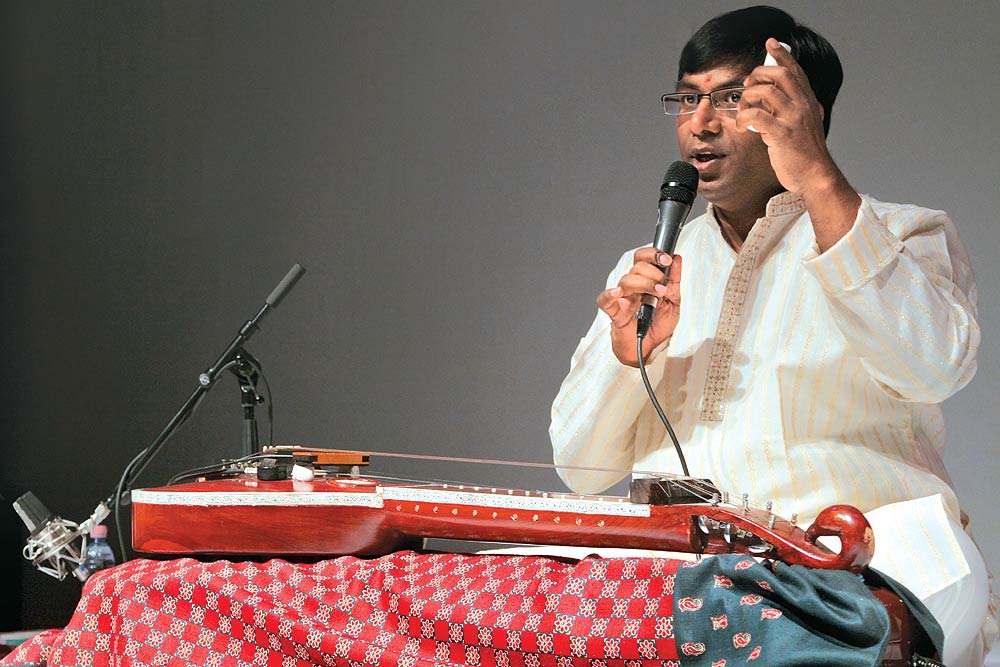 “We did see high-quality fusion in the 1960s and ’70s when, say, a genius like Pt Ravi Shankar was at his creative peak. Else, fusion, for many Indian artistes, has been escapism from the rigours of our classical music,” says Mysore-born Ravikiran, who learned from his trendsetter father N. Narasimhan. That’s when he became increasingly obsessed with a better way to yoke East and West together. “Melharmony has a huge potential that is getting tapped over time; one needs to have a vision of both worlds to go for varied kinds of blends,” he says.

For Ravikiran, such a mission helps weld certain cultural elements that are otherwise irreconcilable. “Indians can find Western pieces incompatible with the concept of raga. Inversely, Europeans or Americans will find our orchestration, including film music, as disregarding the principles of harmony. They often fail to appreciate solo-centric renditions as nothing more than exotic,” he says.

Unlike fusion, where artistes get very little or perhaps no time to sit together before meeting on stage, melharmony works are preceded by rehearsals spanning eight months to one-and-a-half years. “Once I compose, I send the notes to the orchestra—and oversee preparations over Skype initially and, later, in person,” he says. “Melharmony is possible with not just Indian music, but other oriental strains from China and Korea.” As for the northern idiom Hindustani, Ravikiran says melharmony will help it gel better with jazz. “Both systems revel in improvisation,” says the experimenta­list, who has worked with a row of frontline compatriot musicians.

American musicologist Robert Morris, who has worked with Ravikiran, says western composers, including him, have felt “both Indian music and jazz were being compromised even in the spirit of global music connection”. An article by Morris, who teaches at University of Rochester where he was chair for composing at Eastman School of Music, expl­a­INS the essential difficulty: either you need to water down ragas because western instruments generally can’t go for the degree of ornamentation essential to the Indian system, or you resort to simple, limited chords. Melharmony, says Morris, is a “flexible and responsive way of composing fusion music.” Frame drummer Glen Velez says the new idiom has had a “profound influence on our not­ions of improvisation”, while Toronto-­based mridangist Trichy Sankaran is all praise for its “holistic approach”.

Sitar legend Ravi Shankar, who had famously said four decades ago, “If you don’t believe in god, look at Ravikiran”, had appreciated melharmony a year before his death in 2012. The concept, which has found a platform in Delhi, Mumbai and Bangalore, has also helped spread the name of southern classical composers across the West. In the last half-a-decade, festivals abroad such as Tyagaraja-Mozart, Diskhitar-Beethoven and Oothukadu-Bach have “enabled the much-required export of Indian music concepts”, says Ravikiran, who has 750 kritis to his credit.

Ravikiran is also a teacher. “Melharm­ony,” says Minnesota’s Wayzata orches­tra director Mark Gitch, gives “our stude­nts the opportunity to put at least one foot in the Carnatic stream”.

Secrets Behind The Evening Glow