Caught In A Poll Blizzard

The weather is threatening, but the BJP-Congress contest looks all set to go down to the wire More Coverage 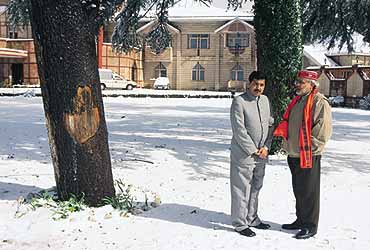 outlookindia.com
-0001-11-30T00:00:00+0553
The weather last week in Shimla, in fact in the whole of Himachal Pradesh, seemed to be dictating the course of the campaign as the much-hyped electoral planks of anti-incumbency, terrorism, corruption and governance went under a thick sheet of ice and hail. Prime Minister A.B. Vajpayee had to postpone the mid-week meetings in his adopted state and Sonia Gandhi cancelled all her poll sabhas slated for Kangra and Mandi. Several Congress chief ministers were expected to campaign but were all compelled to put their programmes on hold. BJP leader Madan Lal Khurana and the Congress' R.K. Dhawan stayed put in Dharamshala and Kulu respectively because road travel was dicey and the choppers would just not take off.

The BJP's star campaigner Narendra Modi, coming back to a state where he was once a general secretary in-charge, was expected to inject a dose of aggressive nationalism into the proceedings. Instead, along with party colleague Pramod Mahajan, he was holed up in a Shimla hotel, watching incessant snowfall on a day campaigning ought to have been rising to a feverish pitch. Joining them in admiring the white expanse of snow was the Congress' election in-charge for Himachal, Satyajit Rao Gaekwad.

How will this imposed freeze in the political weather affect the chances of parties, in particular the ruling BJP, whose campaigners were numerically more and better organised than the Congress? The cold might not really enthuse voters in the high altitudes to undertake long and hard treks to the nearest polling booth on February 26 to cast their ballots.

With the BJP's well-oiled campaign machinery thus jammed, the Congress may retain the slight edge it has managed in the public eye. But at the end of the day, the contest is expected to go down to the wire—the difference ultimately could be varying perceptions of what constitutes popular sentiment against political organisation.

"It is a very tough battle out here," concedes the BJP's general secretary Pramod Mahajan, party observer for Himachal. The Congress general secretary for the state, Mohsina Kidwai, is equally uncertain: "The Congress has an edge in the state, but what can you say about a party (the BJP) that drums up very emotive issues to ride to power." And when Vajpayee braved inclement weather as he made it to Mandi on Thursday to advocate the Ayodhya cause and address the beef-eating issue, trumped up lately by the Congress, he seemed to be almost confirming Kidwai's apprehensions. With barely a week to go before elections, the political pundits in Shimla are more keen on hedging their bets.

The campaign is low key. The small posters that adorn the walls of Shimla's Mall as almost everywhere else in the state is of a younger Vajpayee with L.K. Advani in tow, driving home a point: 'The soldier needs the balm, not the terrorist'. This targets Himachal Pradesh's Dogras and Punjabis, who enrol in large numbers in the army. This ties in with the 'lower' and 'upper' lobby syndrome peculiar to Himachal. Dhumal, who hails from the lower areas, also leans on the discontent in the 'plains' against the 'upper' (denoting both altitude and caste) lobby, identified with the dominant apple farmers and Himachal's political elite.

To cash in on such local differentiations, the BJP has decided to go the whole hog with its 'national' plank of fighting terrorism, albeit in a milder style suited to Himachal. From his snow-encrusted hotel in Shimla, his movements hampered by the weather, Modi told Outlook: "No one will be allowed to divide India." But who is dividing India? "The same ones who are organising attacks in Kashmir, bomb blasts in Mumbai, in the Northeast and elsewhere," pronounces Modi, looking positively natty in a thick cream-coloured windcheater, trousers and a colourful Himachali cap.Will you bring the Gujarat sentiment to Himachal? "The people in the two states are the same, simple and god-fearing," he says.

The Congress campaign, on the other hand, differentiates between national and local issues. Its central focus is chief minister Prem Kumar Dhumal's corruption. "Where's the development in the state? The Dhumal government has been mired in corruption. His own ministers had quit protesting against the chief minister's style of functioning," says Virbhadra Singh, former CM and chief campaigner of the Congress. This has come in the wake of corruption charges levelled by Punjab chief minister Amarinder Singh about Dhumal's vast properties and businesses in Punjab. The counter to this has come with the Gujarat police allegedly revealing they had seen some Punjab ministers with call girls in Ahmedabad during the elections there (see box).

In Dharamshala, Virbhadra not only turns the campaign into a tirade, he lashes out at smear campaigns (like the call girl story) as an attempt to divert issues. "Once in power, we will order an inquiry into charges against Dhumal, his ministers, mlas and officials who have all participated in the loot. While Kargil martyrs from Himachal have yet to be allotted petrol pumps and gas agencies, Dhumal's 'near and dear' ones have climbed the prosperity ladder quite fast," alleges Virbhadra.

"It is a measure of things that the state now has a crippling debt burden of over 15,000 crore. Who is answerable? It is all right to talk of terrorism, but it is the government's job to only protect its citizens from terrorists and not raise issues about it while in power," he fumes.

He and other Congressmen, however, fail to answer convincingly what they have done to build public opinion against the BJP government in the past five years of its rule. The Congress is also up against a different kind of campaign. Himachal and Manali are the PM's adopted state and town. Dhumal quotes him as saying: "You give me Dhumal and I will give you development." This is more than a slogan. In the past five years, the Centre has given HP over Rs 1,751 crore through special aid packages.

Two things have happened due to this. One, the state government has been able to regularly pay salaries to its government employees—the state's revenue is just enough to meet the salary bill. Besides, the government, thanks to central aid, has managed to initiate major developmental projects. Incidentally, government employees and their families account for nearly 12 lakh voters out of a voting population of about 40 lakh. Two, the government has been able to pay support prices to apple growers who are the main financial backers of political parties. The apple growers are also happy with the improved road network the Dhumal government has provided them. Keeping these two sections happy is important as they constitute an influential votebank. The BJP has memories of the 1993 assembly polls when both lobbies conspired against the BJP, leading to its defeat. To top it, the BJP has played the quota card. The government, literally on the last day of the assembly, included the Gaddis and Gujjars (communities that are still largely nomadic) in the state scheduled tribe list.

Poll pundits here say rebel candidates are likely to affect the prospects of both the Congress and the BJP and may have a bearing on the outcome in as many as 30 constituencies. While there are 18 BJP rebels in the fray as independents, there are others who are contesting as Himachal Vikas Party (HVP) candidates. Both are likely to hit the ruling BJP. The Congress has about 12 rebels contesting. In addition, there are other factors. Overnight, Sharad Pawar's ncp and Mulayam Yadav's Samajwadi Party have decided to contest, in addition to Ram Vilas Paswan's Lok Jan ShaktiWhile the winnability of these parties is strictly doubtful, their ability to play spoilsport is higher in an election where the winner often emerges victorious with 400 to 500 votes. Admits one senior BJP leader: "Yes, we have set up these candidates."

How does one describe anti-incumbency here? The 1998 elections was actually won by the Congress which got 31 seats against the BJP's 28. But it was unable to form the government after Sukh Ram joined hands with the BJP. Dhumal got the great chance that he and his party were looking for. The key question this time too is, which way will Sukh Ram go? The former Congressman is still considered influential in at least Mandi district and is being projected as "the man who led India's telecommunication revolution". The fact is that Himachal leads India in the telecom sector.

After supporting the BJP for five years, Sukh Ram is an embittered man now. But he is careful about his preferences. "I have been humiliated by the Congress and the BJP." Who would he support in the eventuality of a hung assembly? "I will not support them, they will support me," he asserts, in a show of bravado that is not matched by support on the ground. With the Congress refusing to have him as company, Sukh Ram probably has no option but to go with the BJP.

But that, for now, is a post-poll issue.