Caught In A Pincer

The embattled DMK is fast losing its bargaining chips 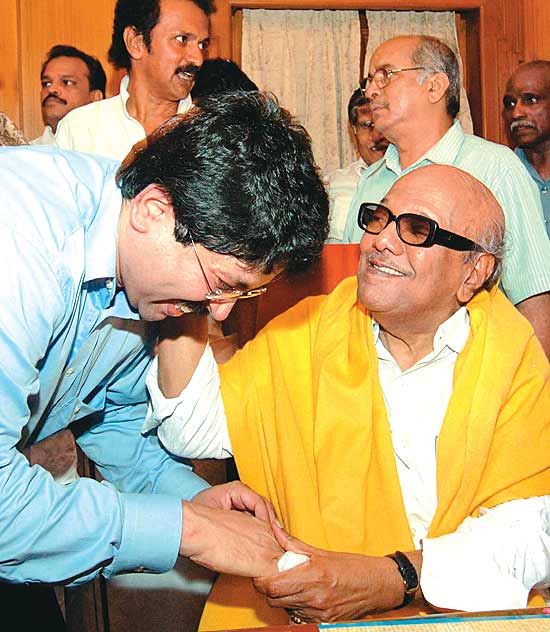 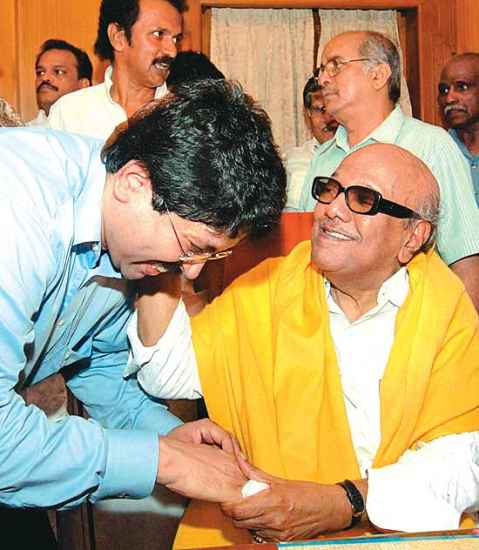 An SMS doing the rounds in Chennai aptly describes the deep hole a demoralised DMK has dug itself into: “We don’t care about the Tamil Nadu assembly results. We are going to get an absolute majority in Tihar.” That’s exactly how it looks, if one was to go by the steady stream of bad news for the Karunanidhi family. The Delhi High Court has rejected Kanimozhi’s bail plea and textile minister Dayanidhi Maran is the latest DMK minister in the UPA cabinet in danger of losing his berth. Maran, who preceeded A. Raja in the telecom ministry, has now become another DMK target in the 2G spectrum scam probe.

While a stunned DMK holds an emergency ideating session, it’s now taken for granted that the party holds precious little bargaining power at the Centre to bail any of its leaders out of the crisis. Experts feel the hard option of the DMK pulling out of the UPA government is risky because it is their sole remaining connection to power. The other option being bandied about is the DMK withdrawing its ministers from the UPA cabinet: an under-attack Maran’s position is looking increasing untenable in any event.

Such a scenario would fit neatly into the power play crafted by the Congress—Maran is the DMK’s last national face in the government (the party’s other Union minister, M.K. Azhagiri, is more keen to focus on state politics). When (and not if) Maran goes, the Congress can strengthen its stranglehold over the DMK at the Centre and pick ministers of its own choice to hold the plum portfolios hard-bargained-for by the DMK during government formation.

Isolated on all fronts, the latest move doesn’t augur well for Maran. His relationship with his party has been in the doldrums for some time now. It’s significant that the party leadership has distanced itself from Maran’s current troubles. There hasn’t been a word of support for him. Sources in the know say Karunanidhi’s game plan is to pull the Marans down: If the party is to go down, so should he. While Maran is viewed as being close to the Congress, the recent spate of allegations shows that the grand old party isn’t siding with him either. The resultant fallout already shows on his brother, Kalanidhi Maran’s, business empire.

Indeed, the CBI’s charges against Maran look serious. The investigative agency claims Maran played a role in the 2006 sale of telecom service provider Aircel to Malaysia-based firm Maxis, whose owner is said to be close to the DMK and the Maran family. Maran denies playing any role in this—but the testimony of former Aircel owner and serial telecom entrepreneur C. “Siva” Sivasankaran before the CBI last week didn’t help his cause any.

Siva, who was Aircel’s owner when Maran was the telecom minister, said Maran had forced him to sell out by not parting with licence and spectrum. Ironically, Siva is under the scanner himself and has reportedly been charged by the Enforcement Directorate of funding S-Tel and then buying the company after it obtained telecom licences. Observers make reference to Siva’s reputation as a reclusive and mercurial businessman—he is also close to the Tatas, who were then at loggerheads with Maran.

There’s more. The Comptroller and Auditor General of India has also noted that rules were changed during Maran’s tenure—by the Department of Telecommunications’ revision of the terms of reference—to exclude the Group of Ministers from playing a role in spectrum pricing. And older stories—like the virtual exchange of 323 BSNL lines at Maran’s Chennai residence—are now getting new play. Maran, as well as the DMK, is running out of options to call for help.