They want the bus to Srinagar, but not as a substitute for a permanent solution 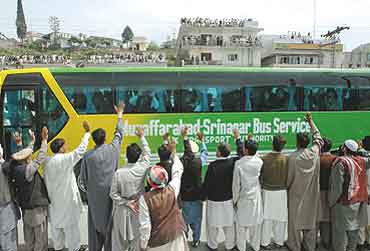 outlookindia.com
-0001-11-30T00:00:00+0553
The cartographer's line is the invisible dagger that divides a civilisation, tears apart families, spawns emotions ranging from bitterness to longing. These combine to constitute the collective memory of a people; it haunts them, it becomes the defining principle of their existence. Ask the Bahars. Their father, Syed Bahauddin, an educationist, had migrated here from Baramulla in 1947. Thirteen years before brain haemorrhage ravaged his memory, Bahauddin would talk about his birthplace, transmitting to his children an abiding love for the land they had never visited.

On February 16, India and Pakistan announced the start of a fortnightly bus service between Muzaffarabad and Srinagar. The Bahars were among tens of thousands of people across the state elated by the decision. Bahauddin's lawyer son, Syed Shahid, said, "We decided on the very day that, if not all of us, some would definitely travel by the bus to the land of our dreams." Shahid's wife, Ismat, was delighted more than him: she had migrated from the Indian Kashmir only in 1990. The Muzaffarabad-Srinagar bus link was her chance of revisiting her childhood.

For the Bahars and others, the Line of Control is their line of discontent. Fifteen years ago, activists of the Jammu Kashmir National Students Federation had marched from Muzaffarabad to Chakothi to 'trample' the LoC. Near the Opi bridge—Kaman bridge (now called Aman) to Indians—Indian snipers fired upon the activists, killing three and wounding scores. Two years later, two other such attempts saw nearly a dozen men shot dead by the Pakistanis.

So when the authorities, on March 14, invited applications from those wanting to travel across the LoC, Bahar and thousands others mobbed the government offices over four consecutive days, forming interminable queues in the hope of translating their dreams into reality. The response was overwhelming. Muzaffarabad deputy commissioner Liaqat Hussain says they have till now distributed 12,000 forms in Muzaffarabad and the six other districts of the state. By March 18, nearly 3,000 duly filled forms were returned by prospective travellers.

A list of 46 passengers was prepared for verification by the Indian authorities. On the list were Shahid and Ismat. But the number was pared down to 30; Ismat got the axe. "I am depressed. I have lost interest in everything," she lamented even as husband Shahid tried to console her.

The enthusiasm over the bus has generated its own problems. With just a fortnightly frequency, and only 30 seats available, most people here feel their chance to undertake a trans-LoC journey will come years later. There are also allegations of nepotism against the authorities. "They say the bus service is aimed at facilitating the reunion of divided families, but many on the list (of prospective travellers) do not represent genuinely divided families. Rather, they are the handpicked people of the establishment," bristles Iqbal Awan, a migrant from Uri.

Such allegations, ironically, only underline the people's fervent desire to be on the bus. Take Abdul Rashid Butt, now 74, who had travelled here from India's Kashmir when he was 16. Then Partition happened, and Butt was left stranded. He broke down as he talked about the other Kashmir, where his parents, two brothers and two sisters have died over the last 10 years. Believing Allah had kept him alive to be on the historic bus, Butt was inconsolable to find his name missing from the list of 46. "I was the most deserving person, but I am at a loss to understand why they didn't consider me." His son, Saqib, worried over him. "If he is not considered for the second bus, he can go into shock, become a psychological case," he feared.

As Srinagar witnessed firefights between militants and security forces 24 hours before the bus was to be flagged off, the enthusiasm for the bus did not wane. It left some stoic about the journey; others lambasted the militants. Begum Zamurrad Sharif, 75, a former lawmaker in Pakistani Kashmir, and her son Arshad Qureshi, were among the passengers of the April 7 bus. Sharif and her late husband had migrated from Srinagar in 1947 and could not revisit it despite the death of one of his two brothers-in-law settled there. "If our death is written on that route, we cannot change or stop it. So, we will go," Qureshi said the evening before they boarded the bus. Added Shahid Bahar, "The beneficiaries of the bus service are none other than the Kashmiris. Whosoever obstructs the service is the enemy of Kashmiris."

Already people here are mooting new ideas to forge more durable and better links between the two Kashmirs. Some say families with proven Kashmiri origin should be allowed to drive their own vehicles across the LoC. Raja Farooq Haider, advisor to Prime Minister Sardar Sikandar Hayat on political affairs, advocates launching a "truck service" between the two parts. His suggestion is tantamount to throwing open the trade routes between the two sides, thereby creating conducive conditions, as he points out, for their reunification. 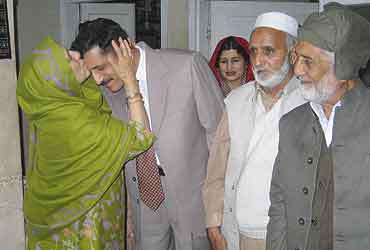 But the popular desire to unite divided families or visit the land of their dreams shouldn't be mistaken for an acceptance of the prevailing status quo in Kashmir. Ask anyone on the streets of Muzaffarabad, and he'd express boundless joy at the bus service. Yet, in the same breath, he would add that the bus should not overshadow the basic demand of the Kashmiris: reunification and allowing them to choose their future. Shopkeeper Ziauddin Pirzada's comment is typical, "Yes, the bus service is good but that does not mean we can forget about solving the problem."

Analysts here feel that India's offer to initiate the Muzafarrabad-Srinagar bus can't influence the mood dramatically, impacting as it does only a minuscule percentage of the population: at best 15,000 families with people on the Indian side of Kashmir. These analysts consequently say the mindset here can't change unless steps are taken to address the issue of Kashmir's future or measures are initiated suggesting a movement in that direction. Fareeda Ghani, a journalist with the UN mission here, said, "Only running the bus is not sufficient, a solution to the basic problem is essential." Ghani, who was born in Srinagar in 1945, was among the 30 passengers who took the bus on April 7. "As a Kashmiri, it's my right if I go to the other part or my relatives come here from there. But real satisfaction will come to the Kashmiris when the basic political question is resolved."

However, the president of the ruling Muslim Conference party in Pakistani Kashmir, Sardar Attique Ahmed, differs: "The bus service has changed the attitudes of the people and will change more. This confidence-building measure will become a source for more CBMs." Attique feels the change in mood is reflected in the popular enthusiasm for the bus. "If the mood hadn't changed, no one would have agreed to travel on the bus."

Partly, the current euphoria springs from the belief that the bus is a firm step towards the political settlement the Kashmiris have in mind. This sentiment can at best sustain itself for two years; it would begin diminishing the moment the Kashmiris feel India's answer to the Kashmir question is to just ply a bus between Srinagar and Muzaffarabad. Says Sheikh Amin, editor of pro-jehadi magazine Kashmiral Yaum, "India has always disregarded the aspirations of the Kashmiris, focusing instead on superficial things. If custodial killings and other atrocities continue, it will be very hard to reconcile the people with a process which already faces opposition from a powerful section of society." Amin argues that as a democratic country India should demonstrate courage in respecting the will of the Kashmiris.

People here feel the April 7 CBM should lead to an end to human rights violations in Indian Kashmir, repeal of draconian laws, release of political prisoners, and facilitation of an intra-Kashmiri dialogue. Says Sahibzada Ishaq Zafar, president of the Pakistani Kashmir chapter of Benazir Bhutto's Pakistan People's Party, "The bus service is a positive development, but it must be followed by more steps."

But the bus has stoked the hope of Islamabad-based research scholar Ershad Mahmud. He argues, "It's a first step to achieve the Kashmiri's destiny and will increase the level of confidence among the three stakeholders—New Delhi, Islamabad and Kashmiris." He thinks the bus will create pressure on both countries to take fresh peace measures and grant greater salience to the voice of Kashmiris. "It will create a conducive atmosphere to develop greater integration between the people of two Kashmirs," Mahmud insists.

But suspicion about India's intent has always been widespread. It's true about the bus as well. Amin encapsulates this fear well: "There are no signs that India wants to reduce its huge military concentration in Kashmir. Apart from that, the highly politicised bus service has increased apprehensions that India just wants to convert the LoC into the international border."

It all comes back to the LoC, the invisible dagger embedded into the heart of Kashmir.