Consumers are ecstatic, the FM is beaming, the economy is soaring. So, what can spoil it all? 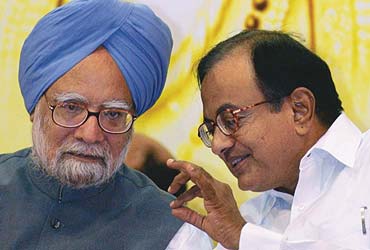 outlookindia.com
-0001-11-30T00:00:00+0553
If Indian consumers are the happiest in the world, can the economy be far behind? Or Finance Minister P. Chidambaram? Or even any of the investment banks and economic research organisations tracking the progress of the economy? Indeed, no. As Chidambaram blithely inaugurates one conference after another with nary a furrow on his brow, buoyed by still-stunning corporate results and their acquisitions, and AC Nielsen's biannual surveys of consumer sentiment which finds Indians consistently topping the charts, the numbers seem to bear him out. "I can't see any abrupt or dramatic slowdown of consumption growth," he exulted, after the Central Statistical Organisation released figures that the Indian economy was kissing China's scorching pace by logging just a decimal point lower than nine per cent—or 8.9 per cent—in April-June, 2006.

The news stunned analysts as even the most optimistic of them had expected a growth of around 8.5 per cent, especially with the RBI trying to curb inflation and overheating of the economy. Its brakes seem to have failed. Coming as the numbers did after the record 9.3 per cent in January-March 2006 quarter, bringing growth for the full 2005-06 to 8.3 per cent, it led to a flurry of rethinking among investment banks, think tanks, and multilateral agencies like the IMF and the ADB. Most of them, including the finance ministry and the RBI, upgraded their forecasts for economic growth in 2006-07 (see table). Even the unusually conservative IMF raised it from 7.3 to 8.3.

"The economy has grown a bit faster than we expected," says Ajit Ranade, chief economist at the Aditya Birla Group. In fact, during the UPA regime, all quarters (except one) witnessed a growth of 7 per cent plus—and the average during the UPA rule will be much higher than seven. "That has in fact raised expectations in India. We will have to do better to meet that standard," Chidambaram told journalists.

It just might happen, say analysts and think tanks alike. The boom is still driven by demand, of both consumption and investment, and shows no signs of ebbing. To economists, it clearly indicates that whether the FM likes it or not, the RBI will increase interest rates by 25 basis points as its October-31 credit policy measure. "We are witnessing a steadily accelerating industrial expansion," says Ifzal Ali, ADB chief economist, and adds, "growth in manufacturing and in capital goods production has been robust, driving the economy forward and imparting the necessary diversification."

What prompted the sudden resurge of confidence when 2006 was supposed to be all about downsides and warnings? First, the feared US slowdown turned out to be quite tame and moderate, says Sanjeev Sanyal of Deutsche Bank, Singapore. Most of the growth engines outside the US, especially China and Japan, too are doing well. India's exports did not fail to take advantage of this, touching $10.3 billion in August, reflecting an impressive 42 per cent growth. And software exports are expected to grow by 27-30 per cent this year, according to NASSCOM. And within the country, inflation moderated before it could raise its ugly head fully and Wholesale Price Index (WPI) inflation is now at 4.77 per cent, well below the invisible barrier of 5 per cent. At 6.5 per cent, Consumer Price Index inflation reflects the untamed demand in India today, as well as the employment situation, which Sanyal feels is truly tight and therefore an indication of future growth potential.

Along with continued overseas acquisitions by Indian corporates which now have exceeded FDI flows, the forex inflows too lent a shoulder to the good news. Analysts note that the first six months of 2006 saw $2.6 billion of continued investment by overseas brokerages in the stockmarket as well as strong FDI in manufacturing, consumer goods and services. Andrew Holland of DSP Merrill Lynch is succinct: "It was consumption-led growth, helped by manufacturing growth and investments in infrastructure, enhanced by agricultural growth." A record growth in manufacturing was even more of a stunner as most experts had thought that industry was just about saturated with the restructuring and the time for passing on costs to consumers had come. Manufacturing grew at 11.3 per cent in Q1 this year and even Q2 results are expected to be as good. 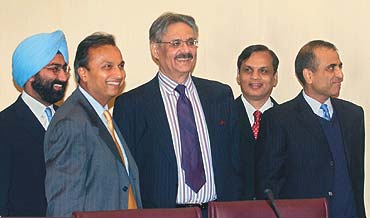 Indeed, capital expenditure, whether it is by way of companies setting up additional capacities, or government putting infrastructure in place, is yielding results. "The interest rate hike has not had much impact on the capital expenditure cycle in the short term, firms have had to continue investment because demand has remained strong," says one analyst. So, the investment cycle, powered by strong domestic consumption, has led growth.

The Sensex is up 16 per cent in the second quarter and 31 per cent this year. Operating profits will grow at 39 per cent and sales growth will be 27 per cent for Q2, according to Motilal Oswal Securities. BRICS Securities feels toplines will grow at around 31 per cent and bottomlines slightly higher around 34 per cent in Q2. "Companies tried different things to control prices and keep input costs down. Also, the continuing capital expenditure cycle brought scale, bringing down per unit costs," says Amitabh Chakraborty, research head at BRICS Securities. For instance, the oil price rise forced companies to optimise fuel mixes and up productivity in other ways. Ketan Karani, vice president (research), Kotak Securities, expect profits to go up 19-22 per cent in Q2. "From the data that is coming in, we expect Q2 results to beat expectations. After this, we could well see earnings upgrades across several sectors," he adds.

Are there no downsides to this story? Of course, there are. Government finances continue to be in deep red. And the small fall in global oil prices merely helped in reducing the subsidies, not a great deal of help to consumers when pass-throughs haven't fully taken place. Despite good rains, agriculture production remains an area of concern even though the Q1 showing was surprisingly good with 3.4 per cent growth. "This underscores three things. That rabi is as important a crop as kharif; non-food agricultural produce such as dairy and horticulture is becoming increasingly important and that rural growth is coming not only from agriculture. The rural economy is less dependent on agriculture now," explains Ranade. But agriculture numbers come with a big lag and the final figures may yet take away a few crucial points off the total by March, unless the next rabi produce cooperates.

Both Saumitra Chaudhuri and Siddharth Roy, economic advisors with ICRA and Tata Economic Services, respectively, would like to wait for the kharif numbers for this year before increasing the growth estimates. Advance kharif estimates for 2006-07 are the same as that of last year, which basically means rabi has to show a higher than trend rate to reach an average agricultural growth rate of around 2 per cent and this is a tall order, says Roy. "However, I tend to agree that the manufacturing and services rate of growth could be marginally higher. The real concern will be agriculture," he adds.

Even the interest rate hike could have a lagged effect on the housing and consumer durables sectors, and some of it is already visible according to some analysts. For instance, construction grew at 9.5 per cent in Q1 2006, although it has grown in double digits for the past several quarters. "We will see some lagged impact of the interest rate hike in the third and fourth quarters," says Shubhada Rao, chief economist for Yes Bank. "This is the longest capital expenditure cycle lasting four years. So, we do expect some moderation. Momentum drivers are there but going ahead, interest rates will have some impact," he adds.

All eyes will then be on governor Reddy in the run-up to the credit policy review meeting. Will he continue with or spoil the economic party? Till that time, consider what one analyst said, while reacting to IMF's Raghuram Rajan's comment that "eight per cent is indeed a very high number and we are surprised at India's strength". The analyst observed that if India can do eight per cent with such poor infrastructure, we could do 12 plus with good infrastructure. Chew on that till our next growth bulletin.

By Paromita Shastri and Saumya Roy