It's Govinda's antics versus Amitabh's charm. Over to the battle. 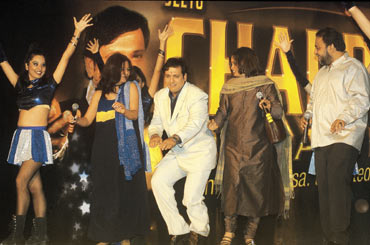 outlookindia.com
-0001-11-30T00:00:00+0553
HE had the sedate Sony management dancing wildly at his show's launch party in Mumbai recently. One more week and we'll know whether Govinda is able to make his viewers do the same. This Republic Day, Bollywood's Entertainer No. 1 makes his small screen debut with Jeeto Chappar Phaad Ke (jcpk), Sony TV's much-awaited and long-in-the-making answer to Star TV's Kaun Banega Crorepati (kbc). Expectedly, the stakes are running high.

Take a look at the people behind the show. Nitin Desai, Bollywood's badshah of sets who boasts of projects like Devdas and Hum Dil De Chuke Sanam, has designed the backdrop. Ganesh Acharya, who made Govinda swing his hips in Kisi Disco Mein Jaayen—a hit number from the David Dhawan-directed Amitabh Bachchan-Govinda starrer Bade Miyan Chotte Miyan—has choreographed the interspersed dance numbers. Though the channel is not willing to come on record, rumours have it that Govinda was given Rs 1 crore as signing amount alone with the total deal anywhere in the region of Rs 8-12 crore. The overall cost of production is approximately Rs 70 crore per year.

The "100 per cent home-grown" concept has been a handiwork of director Ajay Kapoor, quiz master Derek O' Brien and, of course, the programming team at Sony. In the show where you answer questions and play games, greed meets unbridled consumerism. Participants will be given away cash and kind—at every level, winners, after taking home hefty monies, will go on a bonus shopping spree with the star to buy motorcycles, television sets, computers and cars. There's even a contest for the viewers—winners will go on a world cruise!

No wonder Sony received more than a million entries for a ticket to the show within a 10-day promotion period. There's high sponsor commitment as well: Videocon, Coca Cola, Hindustan Lever and Castrol among others, with all of them reportedly coughing up Rs 2.50-2.75 lakh for every 10 seconds. The total commercial time available is ten minutes. Compare this to Sony's biggest show till date, Heena, which fetched Rs 1.30 lakh per 10 seconds.

There are, however, some apprehensions whether the show will eventually do justice to the high expectations generated by what some call its brilliantly comic anchor. Says media analyst Akhila Sivadas: "The excitement for game shows is over. It comes a bit late in the day."

But the crucial ingredients here are interactivity and novelty. And, of course, Govinda—who, with his infectious energy and uninhibited spontaneity, could suit the bill well. His earthy, mass-entertainer persona could easily work magic with couch potatoes. "People would hate to miss even a single episode. You don't know what Govinda might do in that one hour," says programming head, Rekha Nigam.

And in this battle of the anchors, comparisons with the Big B have also already begun. "Amitabh has this larger-than-life figure and it took him time to fit in, to be at home on TV. Govinda's mimicry and style is more homely," says media critic Sudheesh Pachauri. Others like Sivadas are not as impressed. Says she: "His clowning could get too zealous, frenetic and tiresome."

Interestingly, Sony has positioned the show on the Friday to Sunday, 8 pm slot, preferring wisely not to take Bachchan head-on. This strategy, analysts feel, might just work. "It could be a killer in terms of slotting. The Sunday evening line-up on TV is not strong anyhow," says Sanjay Chakravarty, hta's vice-president and media services director.

More importantly, the show is intended to break the ennui and bolster the channel's fortunes. jcpk is expected to drive a slew of new shows including Kusum from Balaji Telefilms and exclusive events with Hrithik Roshan and the Deols. Clearly, in the battle of the Bade Miyan and the Chotte Miyan, it's the viewer who's going to emerge the real winner.