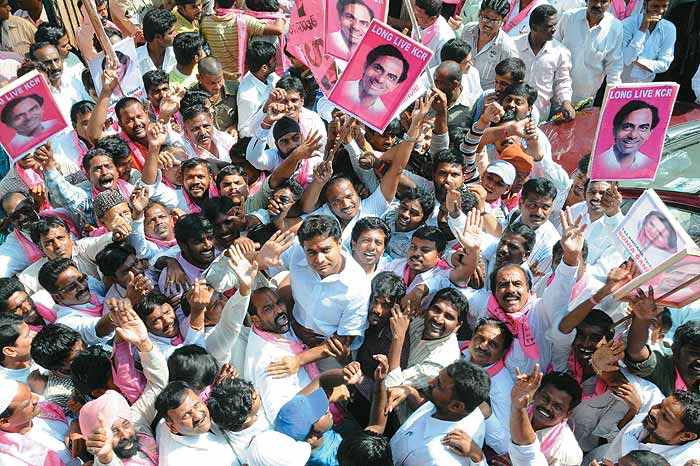 Master Of The Bypoll

Thrusting bypolls on the people of Telangana has in the last few years been a favourite strategy with Telangana Rashtra Samithi (TRS) chief K. Chandrasekhara Rao. The coming July 27 bypolls to 12 assembly seats in Telangana will be slightly different though. They come in the wake of two historical statements by Union home minister P. Chidambaram. The first, on December 9 last year, promising to initiate the process of statehood and then the watered down version of December 23—“taking note of the altered situation and laying down a road map for consultations”.

The TRS MLAs, till then buoyant, saw no option but to resign as distressed youth went on a suicide spree and anger raged across the region. Of the 12 seats up for polls, TRS holds 10, BJP and TDP one each. Lest anyone is still hazy on the campaign line, it’s a single-point agenda, says the TRS—statehood and nothing less.

KCR’s son K.T. Rama Rao, seeking re-election from the Sircilla seat, shrugs off his wafer-thin 171-vote victory in the 2009 polls over rebel independent K.K. Mahender Reddy. Rama Rao faces the same opponent again, the latter now contesting on a Congress ticket. “All the 12 candidates who...