Instant its lure may be, but there isn't much far the BPO boom is taking an individual, professionally 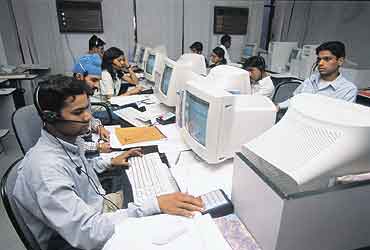 outlookindia.com
-0001-11-30T00:00:00+0553
All of us believe our jobs to be unique in some way; it could be the charm/quirkiness of the boss, the importance/futility of the duties, or the nobility/angularity of the colleagues. There's one category of jobs, though, that stands apart due to its short-term prospects, that of frontline customer service professionals in multiplexes, supermarts, restaurants, fast food outlets, pubs, coffee bars, and—most visible of them—call centres.

Recently, Harish Trivedi, English professor at Delhi University, wrote an angry rejoinder to an article published in the Times Literary Supplement that celebrated the success of Indians harvesting their English-speaking skills through call centres. He dubbed the call centre customer jockeys "cyber coolies of our global age, working not on sugar plantations but on flickering screens, and lashed into submission through vigilant and punitive monitoring, each slip in accent or lapse in pretence meaning a cut in wages".

Trivedi may have gone overboard—call centre advocates would call it weird—in his depiction. But these would-be hi-tech messiahs are unlikely to progress too far in their careers. The reason: within 3-4 years, they could be at a complete dead-end with little or no skills to show for. "There aren't many lines opening up after 3-4 years. There's no clarity from middle management upwards. The path is associate to supervisor to team leader, then it gets fuzzy," says Ernst & Young's national director, human capital, N.S. Rajan. Adds Madhavi Misra, senior consultant with HR consultancy firm Hewitt Associates: "Even with promotions and enhanced responsibility, the work-life balance does not change. The job is monotonous; work remains the same." There are positions above team leader, of operations manager and head of operations, but only a minor fraction make it to these slots.

Unfortunately, the bleary-eyed youngsters emerging in the mornings from their hi-tech sweatshops that have mushroomed in and around our metros may not be fully aware of this. Many of them are fascinated by the attractive starting salaries (about Rs 10,000 a month) that their qualifications (just out of college) won't fetch anywhere else, the first-name collegial culture, free transport, food and beverage on the house. The other thing that captures their imagination is the dream that call centres are a sureshot way to reach the United States. "If you can't live in the US, call centres are the next best thing. It's like living there for the duration of the shift," says a young woman employee.

If you want to live life for the moment, or for a dream, the sunrise segments of the services sector is what you should aim for. Also, more jobs are being created in the services sector, which grew 6.8 per cent in 2001-02 and 7.1 per cent in 2002-03, against the overall growth of 5.6 per cent and 4.4 per cent respectively. Employment growth has been explosive. Call centres employ 2,00,000 Indians at present and McKinsey predicts the ranks to swell to 1 million by 2008. This has drawn professionals like MBAs, CAs, engineers, lawyers, doctors, architects, even journalists to such jobs.

However, the typical customer services jobs require minor skills like a winning smile, functional language and humility under fire. So, what happens if somewhere down the line, wisdom—and reality—strikes? That you can't grow beyond a point, and that you haven't acquired too many skills. And what will happen to the huge impetus this new working class, all with high aspirations and sizeable disposable incomes as most live with their parents, has given to markets for high-end motorbikes, music systems, mobile phones, electronic goods, pubs, credit cards, etc? To give some insight, look at what's happened in the US where it's the temporaries or school dropouts who grab these jobs and which, for many, act as a second, or even third, job to earn that extra something. In fact, call centres are among the most hated jobs in the US.

Asimilar trend has already begun in India. There are no surveys or quantitative data yet to indicate what happens to those who opt out—and there are many of them, since the attrition rate in call centres is over 30 per cent, and only a fifth of it to join competition. (Even Wipro Spectramind, one of the biggest in the business, employing 8,000, loses 15-20 per cent on an annualised basis even as it recruits 500 a month.) But there are voices that hint at the problems likely to crop up for these new-breed professionals. A youngster, who joined a call centre after Class 12, feels he'll fulfil his one-year contract and then "go back to studies". Says another who's moved into the corporate communication stream: "It wasn't worth slogging it out any more. There wasn't much far I saw myself going."

Everyone's not that lucky. Many who leave hardly have any stomach left to start from scratch in other professions, retraining their skills, or opting for further studies. "I feel the more educated people (MBAs, CAs, et al) will move up to the higher levels. Not a simple graduate like me," says a young woman who works at a Delhi-based call centre. Besides, any position in a new profession could mean a smaller pay packet and lower designation. Outlook met one such employee who realised he had to get out after working night shifts for three years. He found that the best alternative he had was with a public relations firm at much lower salary and position. He took it because, as he claimed, his face had turned pale after three years without seeing sunlight, and he was in a daze most of the time.

The frontline of India's services boom is certainly creating many jobs but not many careers. "Is this (call centres) the place one would like to retire from? Unlikely...," says e&y's Rajan. "The kind of proliferation we're seeing now may not continue. The boom will last for the next two-three years. Then, there'll be a slowdown."

But Wipro Spectramind CEO Raman Roy will have none of it. Lighting a cigar right in the face of 'No Smoking Ever' written in huge letters by his daughter on a display board in his office, he carries the defiance to his conversation. "People who are saying this (questioning the sustainability of the boom, just like this correspondent) don't know their backside from their elbow. Why don't they ask the same question to the country's largest employer, the railways, where a guy does the same job of issuing or checking tickets for 15 years or more?" he thunders. P.N. Hari, director, HR, with Daksh e-services, goes a step further to say: "Vested interests are trying to undermine India's competitive edge. Which is why they use shameful terms like cyber coolies to make us look bad."

Perhaps, deep down, both Roy and Hari realise that the new emerging hi-tech professional has aspirations far higher than the lot that takes up ticketing or like jobs. Which is why Spectramind and Daksh, like other call centres, are doing what the railways would never do: map employees' careers and find positions matching their aspirations. So, they get accountants to prepare payrolls for overseas clients, PhDs in molecular biology to create and validate genomics databases, and those trained in IT to do troubleshooting in hardware or software. There is also intensive inhouse training to augment skills. Says Kiran Karnik, president, Nasscom, "We're working with the industry to see how best to tackle attrition and the overall HR issue. A major part of our focus is in increasing the quality and quantity of suitable HR. This will help in many ways, including reduction in attrition."

But this isn't enough. "Organisations have to provide career and personal development options and also ensure they're recruiting the appropriate profile in the first place," says Joydeep Datta Gupta, executive director, PriceWaterhouseCoopers.Besides, call centres are still not instituting a system of education sabbaticals. "The correlation between education and employment can't be wished away. The low-entry barriers in call centres hit you somewhere down the line," says Rajan.

Clearly, one has to find a way to turn these jobs into careers. But, till that happens, we can be thankful there are jobs being created somewhere... wherever.