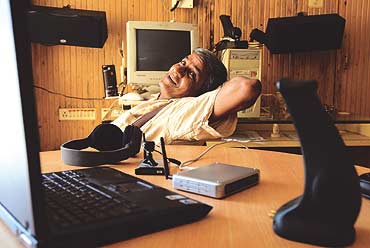 Microchip attached to visitors controls room conditions as per their preferences

Device connected to LAN and the person monitor a person's BP and heart; data can be constantly seen by doctors

Speakers in different rooms activate wirelessly as the person moves around

Six years ago, I began designing my house. It's a bungalow in Mumbai that had more than one floor of living space, so I wanted some conveniences that flat-owners don't necessarily require. One was a network that would allow me to operate a computer from any room of the house. Then there was a need for security—of finding out who is at the gate, especially if you are sitting in a corner farthest from the gate. The third was to find out a way to make the house have the best music systems—with low costs. Six years ago, my options were different. Today, with the benefit of hindsight, newer technologies and a bit more of experience, I have modified some of the choices of 2000.

Because it was a bungalow and also since I was involved with designing it from the scratch, it made sense to plan for the wiring as well. It's a critical job if the wiring has to be concealed. For, the wiring ducts have to be planned, designed and put under the flooring and embedded into the walls. Only after this has been done, and the ducts laid down, can the tiles come on and the surfaces painted. One mistake, and you'll have to settle for unconcealed wiring, or rip open the tiles or the wall surfaces.

I got the local area network (LAN) cables inserted so that any room could have a computer, and still gain access to the Internet. I also ensured that when the doorbell rang, the video-phones would go on in all the rooms simultaneously so that I could see who was coming in. One touch of the button, and I could control the opening of the main gate, while another button would open the main door to the house.

I thought I was being smart. I managed to ensure that the cost of ordinary surveillance cameras—ranging between Rs 10,000-Rs 15,000 at that time—was not more than Rs 2,500 each. I discovered they could be got from the local markets—in Musafirkhana or the Lamington Road markets.

Today, I believe a lot more could—and should—have been done. For instance, I discovered that any electronic lock can be 'broken' into if a knowledgeable electrician can 'short' the wires and disable the locking mechanism. That's why, a year later, I put in manual locks on the doors and conventional latches both on the outside and the inside. Moreover, notwithstanding these precautions, I have also come to believe in the old Macaulay maxim that locks are generally used so that honest people remain honest. That, if a thief wants to break in, he could do a host of other things—like punching a hole in the wall.... That's why, I depend more on surveillance equipment as well, rather than on locking mechanisms alone.

I also learned that the best of electrical systems could get jammed under unpredictable conditions. That lesson came to me rudely during the pounding July 2005 rains. Despite my house being four feet above the street level, I had one-foot-deep water at the ground floor level of the house. Some of the electrical control systems placed under the staircase got damaged. That is why, right now, when my house is undergoing some modification, I have ensured that all electrical and electronic control systems are shifted to levels where even flash flood won't render them inoperable.

During the current renovation, I decided to do away with much of the LAN wiring and the hub. Instead, I have opted for the wireless router. I got mine from the US, where such a router costs around $20 (about Rs 900). In India a good wireless router can be bought for Rs 2,600 (D-Link street price). This allows for three LAN connections and one WAN connection. The first three (LAN connections) relate to conventional cables that allow you to connect one computer with another or to a server. Ideal for the house, for seldom will you have more than three or four LAN connections. The WAN port is for the Internet (ethernet) cable. So all the three (wired) computers can access the Net through the WAN port.

But if you have a wireless-enabled computer (normally Intel's Centrino), it will detect the wireless hub—and you can connect seamlessly to it. If your computer is not wireless-enabled, you can purchase USB dongles from the wireless router manufacturer and attach them to the USB port of your computer. Follow a few simple set-up procedures, and your conventional computer can also be connected to the router wirelessly. Each dongle would cost around Rs 1,500 (though you could get it for around US$10 each from HK or the US). One word of caution: the dongle should preferably be from the same manufacturer as the wireless hub.

So, no more wires, no more of designing your LAN cable network. The cost shouldn't normally be more than Rs 10,000 in India, inclusive of 3-4 USB dongles for enabling conventional computers to access the wireless router. Moreover, the normal range of these routers—of over 500 feet—makes it adequate for any residence. It is like WiFi-enabling your home. If you are keen on enhancing the security of your network, you can encrypt the transmissions from and to the hub so that outsiders cannot easily intrude into your network.

After the rains, when my wired security camera systems began malfunctioning a bit, I decided to go in for wireless cameras. Luckily, I discovered that a look around large department stores like Fry's in the US could get you four wireless cameras with one controller set (for controlling the access to all the four wireless cameras) for $75-200. Each of these has a range of 500 feet, and is small enough to remain discreet. The ones I got are less than 1 inch x 1 inch. The controller set too is sleek—1.5 cm thick, 7 cm wide, and 9 cm long.

I am now in the process of attaching the controller set to my computer and add a motion detector to each of the cameras. So, if there's any movement, the cameras go active and start recording the images on the computer hard disk. Thus, I can even retrieve images of who was at my gate (maybe when I was not at home) from my hard disk.

Depending on the recording software's capabilities, you could, for instance, record all the video streams of all the four cameras with time and date logs; record only those streams which go live when a movement is detected; decide whether the recording should take place only if the movement relates to a size that is bigger than (say) a cat or a dog. If you want to get a bit more adventurous and are willing to spend a bit more, you could also add a compression card to the controller set. The advantage? Well, you could enable these streams to be routed through your web-server, thus enabling you to see your house from anywhere in the world, provided you have good access to the Internet. Caution: these cards cost upwards of Rs 40,000—though they could be available for less than half that price within the next six months or thereabouts.

There's another bit of technology I have not yet been able to crack commercially. For some strange reason, the sliding gate mechanisms, which allow you to open or shut your gate from your car, or from your sitting room, are way too expensive in India. Typically, these prices start at Rs 50,000 and go up to around Rs 2.5 lakh, depending upon the size (hence weight) of the gate, the seller's perception of how much you are willing to spend, and the vendor. I believe that the sliding gate mechanism should not cost more than Rs 15,000.

My reasoning: What you need is a motor, a steel wire and some kind of trigger (mechanical, infra-red or electronic) that tells the motor when to stop. The remote mechanism shouldn't normally cost more than Rs 2,000, the motor under Rs 3,000, the steel cable should cost another Rs 2,000. Add the wheels and the railing that may have to be replaced so that your existing gate can slide more easily—that's another Rs 3,000-5,000. Double this cost to allow for labour and designing costs, you will come to a figure of just Rs 24,000 at the higher end. If you can get a knowledgeable welder/electrician who isn't too expensive, you could still get the gate to move for under Rs 15,000 fully equipped with a remote mechanism. I am still looking around for a good (knowledgeable and reliable) fabricator who can help me with this.

As for my entertainment, thank god, I don't need any fabricator. More than ever before, I believe computers hold the key to enabling some of the best entertainment systems in the house. For instance, a computer with good creative sound card (in addition to the sound capabilities most computers have) and a capture card (costing under Rs 3,000 each) could allow you to connect your DVD player (that can play CDs, DIVX or DVDs and even allow you to modify the region code), your tape recorder, and your TV. Almost all the flat screen and digital TVs now come equipped with connectivity options that hook up to the computer. Thus, your computer could play the DVD and you could still view it on your TV.

The advantages are many: computers play more varieties of DVDs and DIVXs than DVD players. The software can be upgraded, modified and customised far more easily. The cost of a computer DVD player is less than Rs 2,500—spend a bit more, you could even get a DVD writer. The computer's sound settings can play the role of an amplifier and the new sound card software allows for all the bass and treble settings of normal amplifiers. You could even have a home theatre system at a cost that is cheaper than that of an amplifier-based one.

Moreover, by taking the 'headphone' output from even a walkman, and inserting the other end into a computer 'in' channel, you could play your favourite tapes through the sound system of your PC. If you have downloaded music, you could play that as well. Overall, you could then use your computer server, attached to the TV and sound system to become the console for your surveillance cameras and your wireless gateway. Suddenly you discover your overall costs have come down, and the comfort and ease have gone up substantially.

Welcome to my wireless home!

Console The Ego, Frag A Bot