Can You Still Smell The Sulphur?

outlookindia.com
-0001-11-30T00:00:00+0553
In 1984, a writ petition filed in the SC by environmental lawyer M.C. Mehta named Mathura Refinery, a psu located in the Taj zone, along with other small industries and foundries for causing "acid rain", which led to corroding the surface of the Taj Mahal. 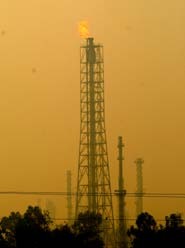 The polluter tag, say refinery officials, has been difficult to shake off. This, despite the company setting aside Rs 122 crore to instal sulphur dioxide recovery units for the petrol, diesel and kerosene it produces. A strongly worded ruling by the apex court left the refinery no alternative. But it's all for the better now. As an official put it: "We have more birds on our premises now than even the Bharatpur sanctuary... which is testimony to the fact that ecology and industry can coexist." Environmentalists, though, are not so enthusiastic. They still blame Mathura Refinery for sulphur dioxide emissions (which when combined with moisture produces the corrosive sulphuric acid).

Refinery officials say they have initiated several steps to actually enhance the quality of air in and around Agra city. "We are a public sector undertaking and are responsible for our actions," an official says. And he lists out the achievements: like the open-for-scrutiny effluent treatment plant to treat slush, which can otherwise pollute groundwater. The refinery also has in place catalytic reformers for the supply of lead-free motor spirit and a diesel hydrotreatment unit for improved quality diesel with low sulphur content.

The green brigade, though, are still not impressed. They say sulphur dioxide emissions from the refinery should have come to zero by now. Officials counter this saying "it's less than the prescribed limit of 450 kilograms per hour". On paper, the refinery seems to be doing its bit in the environment stakes, but clearly there are always some who argue it could do a bit more.

No Tablet For Stone