Can You See The Real Me?

When it comes to the bra, big labels only cater to a few. For most, it's a utility met more by accident than design. 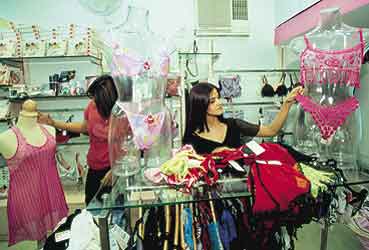 Curvy can be both frustrating and humiliating if you’re shopping for innerwear in India. Twenty-five-year-old advertising copywriter Shalini Nair dreads her visits to the local lingerie shop. "First, when you say you want a 36D bra the lady at the counter stares at your bust. Then she will tell you that they only stock sizes up to 36C and try and convince you to buy a 38A instead. Which of course never fits you."

In a country where the total domestic apparel market is worth an estimated Rs 85,000 crore, it seems remarkable that the innerwear industry adds up to just Rs 1,600 crore. Unsurprisingly, Nair is not alone in her distress; for most women, getting the right size innerwear appears almost impossible.

Research done on a base of 40,000 women across 17 cities by lingerie brand Enamor shows an astonishing 80 per cent of Indian women ignorant of their correct bra size. That’s worse than the 70 per cent figure reported by a similar study by the UK’s Nottingham Trent University.

And shop attendants also don’t know enough to help customers find the right size. As a result, most Indian women are stuck with ill-fitting bras.

Still, at Rs 400 and up, their bras pose little threat to domestic brands like Sona, Groversons, Libertina, and Bodyline. Typically priced at Rs 50-75, these brands make up the vast majority of bra sales in the price-conscious Indian mass market. Yet, this market, unfortunately, may be as ignorant of what a bra should be as its suppliers are. A brassiere is a not-so-incidental, highly complex garment, with as many as 52 separate components. A great bra must do four things:


Tough? That’s why the best bras are designed by engineering experts, who use cutting-edge materials science and tools like finite element analysis, which is a PhD-level teaming of engineering and maths more commonly found in aeronautics, automobile design and, yes, rocket science.

As early as 1943, eccentric billionaire and sometime Hollywood director Howard Hughes got aircraft engineers to design a cantilever bra to best highlight the considerable assets of Jane Russell, the heroine of his film, The Outlaw.

More than 60 years on, bra design is still primitive for most domestic giants. Many lack in-house design teams. A master tailor makes a few patterns for each size, from which the boss selects the ones for actual production.

Women come in many shapes and sizes, and ideally a bra should be available in all the sub-sizes within a size, up to 14 of them. But local players often won’t go beyond the most common sizes because they say retailers will not stock so much inventory. They can get away with this because a customer is all too often unaware of what her size really is. And when some firms get orders for padded bras, they will line the garments from the inside—making them a size smaller. "They try to fit the customer into the product rather than fit the product on to the customer," says lingerie designer Juhi Chauhan.

Though the right retail ambience would relax a customer and help her choose better, apart from some high-end lingerie stores, most shops have men behind the counter and lack basic facilities like a trial room. "They try to convince you to compromise on the size," grumbles designer Suman Nathwani, who owns the upmarket Calcutta store, La Lingerie.

Moreover, retail staff are often unaware of the terminology of lingerie. "They won’t know what a negligee or a corset bra is," complains Shabdali Mukerjee, a media professional from Bangalore.

Since you rarely get the right cup size, you end up wearing bras that are loose around your torso but tight over the breasts. "Women then reduce the belt size by using safety pins or cutting it down. Can you imagine the discomfort involved?" asks Nathwani. 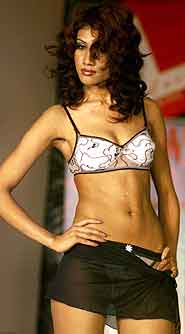 Besides the size, women often get the style wrong, too. For example, only one basic sports bra design is available in India, even with premium brands like M&S. Internationally, women can choose among sports bras specifically designed for different physical activities. A foreign sports bra will soak up 75 to 80 per cent of a jerky movement, while Indian counterparts absorb only about 28 per cent. "The sports bra I wore to my aerobics classes made my chest look completely flat and I could feel my bust moving all the time. It was almost like wearing a tight, suffocating T-shirt," complains housewife Vatsala Mehta.

One can still work out in a regular bra. But pregnancy and nursing are times when a woman must have the right innerwear. Several women are actually unaware of the extent to which pregnancy affects bust size—a 34A can swell to a 34D or a 36B over nine months.

You can get a good-quality nursing bra, but it won’t be cheap. Lovable nursing bras come at Rs 400 and up, while M&S has them from Rs 1,950 onward.

Swati Mehra recalls with distaste her experience while shopping for nursing bras during her first pregnancy. "I had no one to guide me and the shop attendant advised me to buy 2 sizes larger. I eventually increased one size. And all through my nursing I suffered this ill-fitting bra for which I had paid so much.’’

Shrikant Raghavan, head of sales and marketing at Triumph, feels that innerwear is still seen as a utilitarian commodity rather than a fashion accessory in this country. This may be why no Indian fashion school teaches lingerie design. An interested student has to learn on the job or go abroad.

But with awareness (and hence acceptance of a better but more expensive product) rising among upwardly mobile young women who love to flaunt their innerwear, domestic brands may just have to pull up their socks. Enamor’s research shows that the innerwear market is growing at 12 per cent a year, against 10 per cent for domestic apparel as a whole, which is also an encouraging trend.

Meanwhile, Vandana Narang, assistant professor at Delhi’s National Institute of Fashion Technology, thinks things can look up in the domestic market once the wto lifts quotas from January 1, 2005: "That will make import of lingerie inputs like plastic bone, horse hair and good quality underwire easier and encourage local players to design better undergarments."

Until then, finding comfort next to her skin will remain an expensive luxury for the Indian woman.

'The Uday Yatra Was My Idea'