Can The House Ever Win?

A whole Parliament session wasted. How our MPs undermine our democracy 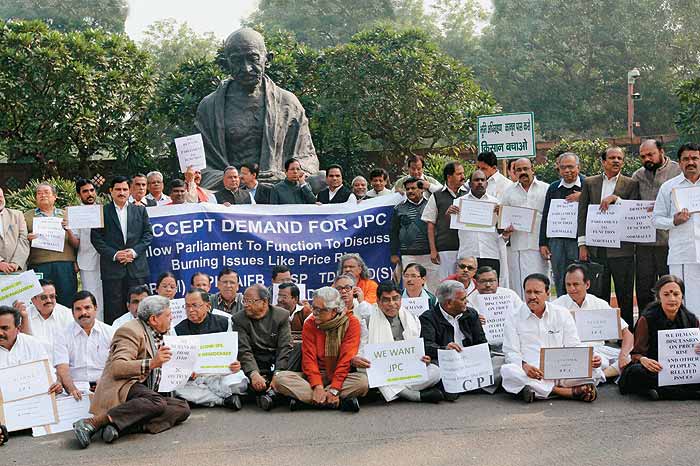 Disgust, apathy, tedium—these are perhaps the emotions that register most with the aam aadmi on the state of affairs in the Indian Parliament. But for those who do care about our corroding institutions, maybe anger would be the more appropriate emotion than indifference. For the first time ever, an entire session has been lost over a deadlock between the opposition and the government. The institution that at times still showcases the best of our democratic traditions has just taken another serious beating.

“The JPC is essentially a political tool...in a political battle, you don’t give a weapon to your opponent.”

So what are the political compulsions that drive our MPs to undermine the very institution that gives them a voice? In simple broad strokes, the story goes something like this: ever since UPA-I came to power in 2004 after delivering a shock defeat to the BJP-led NDA, the opposition has acted churlish, disrupting the house on even flimsy pretexts including one shameful instance when they staged a walkout over the “PM’s attitude”. Now, 18 months into UPA-2, they have a real issue they can sink their teeth into. Any wonder then that the opposition wants to milk the 2G scam to the hilt, and hence the conclusion—in Leader of the Opposition (LOP) Sushma Swaraj’s own words, “If we agree to a debate the government will only try to talk the issue away.” So we have a deadlock, a demand for a probe into 2G by a joint parliamentary committee (JPC) that the UPA is unwilling to concede.

Why won’t UPA allow it? Union Parliamentary affairs minister Pawan Bansal told Outlook that “we realised it is not a bonafide demand to get to the bottom of the scam but just a way to do politics”. Here, he concedes that “it is a matter of shame for us that this happened in our regime” and that the “repeated stallings raise questions about the relevance of the House...what the LOP says does not auger well for democratic traditions.” The Congress argues that there is already a public accounts committee, headed by the BJP’s M.M. Joshi, that is equipped to look into the issue. Bansal says that “the JPC is essentially a political tool” and that “in a political battle, you don’t give a weapon to your opponent”.

The LOP in the Rajya Sabha, Arun Jaitley, is usually known to be opposed to the policy of disruptions that the party has often engaged in. “I prefer a debate,” he says, “but in this case the government has invited the jam on itself by destroying the CBI and CVC and left no honest mechanism for discussion. Obstructionism, therefore, becomes the only choice.”

“A lynch mob does not look at systemic issues. Parliament is no longer a debating chamber but a numbers chamber.”

What this entire episode reveals is that the dominant instinct of our netas is to score or rebut a political point and not to build institutions. In western democracies, like those in the UK and US, this type of disgraceful deadlock would be unacceptable. A senior Parliament officer explains that both the JPC and PAC are tools of accountability. The opposition argues that the PAC cannot cross-examine the PM. That is a convention and not a rule, says the officer. If the audit takes the PAC to the PMO, it can go there. What is also a convention with the PAC is that the proceedings are kept under wraps till the report is finalised. This means the opposition would be denied the delight of abusing the government every day.

Meanwhile, a veteran Congress MP, in an asid, asks how a JPC—obviously headed by the party—is expected to come up with any earth-shattering discovery about 2G? So it’s really not about the ends at all here, just the means for the opposition. Still, questions are being asked about the Congress stand; many party MPs wonder why the leadership is being so stubborn about not conceding to a JPC, since “the 2G issue can no longer be contained in the age of Radia tapes”.

“The MPs just increased their own salaries...look at the way they conduct themselves. High time the public got angry.”

Vinod Bhanu, executive director, Centre for Legislative Research and Advocacy, questions the very basis on which Parliament functions when MPs set the rules for themselves: “They have just increased their own salaries and look at the way they conduct themselves. It’s high time the public got angry. It is a very contentious issue—how can a body like Parliament fix its own salary?” He argues for autonomous groups to monitor Parliament and the performance of MPs.

Barun Mitra of the Delhi-based Liberty Institute says that because the opposition has found an issue for the first time in the 15th Lok Sabha, they are functioning like a lynch mob. “A lynch mob does not look at systemic issues but is motivated by the desire to show it’s great by beating up someone. The great tragedy for India is that as the mob takes over, systemic issues are ignored, so every institution goes downhill,” he says, adding that “Parliament is no longer a debating chamber but a numbers chamber”.

“The UPA has invited the jam on itself by destroying the CBI and CVC; it’s left no honest mechanism for talks.”

Besides the overt problem of disruptions and deadlocks in Parliament, over the last 15 years, the system is also being destroyed from within by the callousness of political parties. For instance, since the opening of the economy and the arrival of businessmen-MPs, parties do not appear to care about conflict of interest issues when they nominate members to standing committees. For instance, there are two well-known Congress contractors in the committee for public undertakings. They may not openly use the committee to lobby for contracts, but being on the committee certainly helps them bag certain deals. All parties, with the exception of the communists, are guilty of allowing members to sit on committees in which they have a direct interest. In the process, Parliament is being subverted to become a forum that facilitates certain corporate lobbies and interests.

There are already too many dynasts and millionaires in the club. Now it appears the club is not even functioning properly. Of course, there are still some fine MPs, eager to debate and discuss points of policy. The problem is, they are becoming increasingly irrelevant in the larger chaos of the system.

Don’t Eat Your Hearts Out!