Tanushree Dutta, a former beauty queen-turned-actress, recently accused veteran actor Nana Patekar of sexual harassment on the sets of their movie, Horn ‘OK’ Pleassss way back in 2008 while they were shooting for a song sequence. 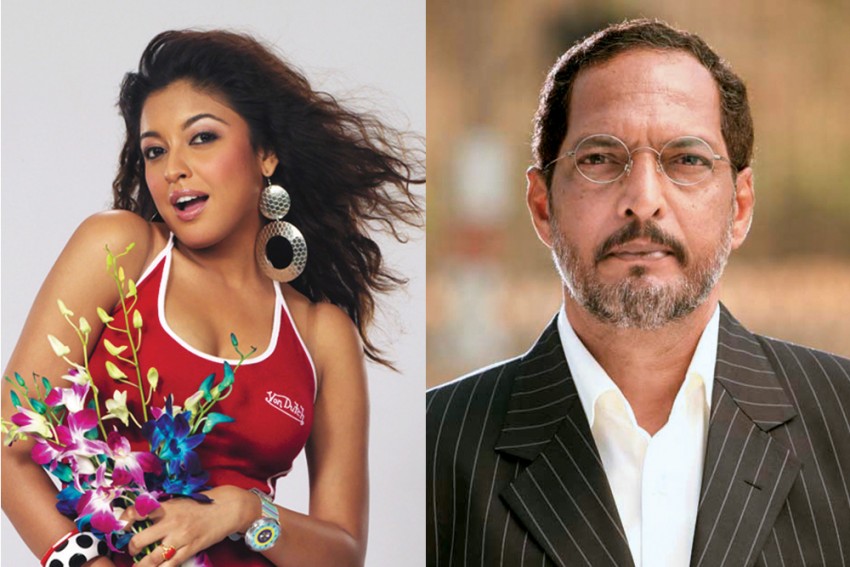 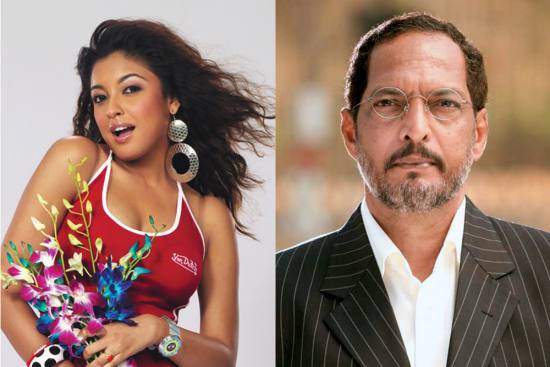 It’s a can of worms nobody had dared to open up yet in Bollywood. Rampant exploitation of actors and actresses by some bigwigs of the film industry, beneath all its glitz and glamour, has been an open secret for years. And yet, it was hardly ever talked about, not even in hushed tones. The 2017 #MeToo movement of Hollywood, which prompted many top-notch actresses to expose the all-powerful American movie mogul Harvey Weinstein, accus­ing him of seeking sexual favo­urs in return for work in his movies, had raised hopes that their Indian counterparts would soon follow suit and take to task their predators back home in their fight for justice. But it was not to be. 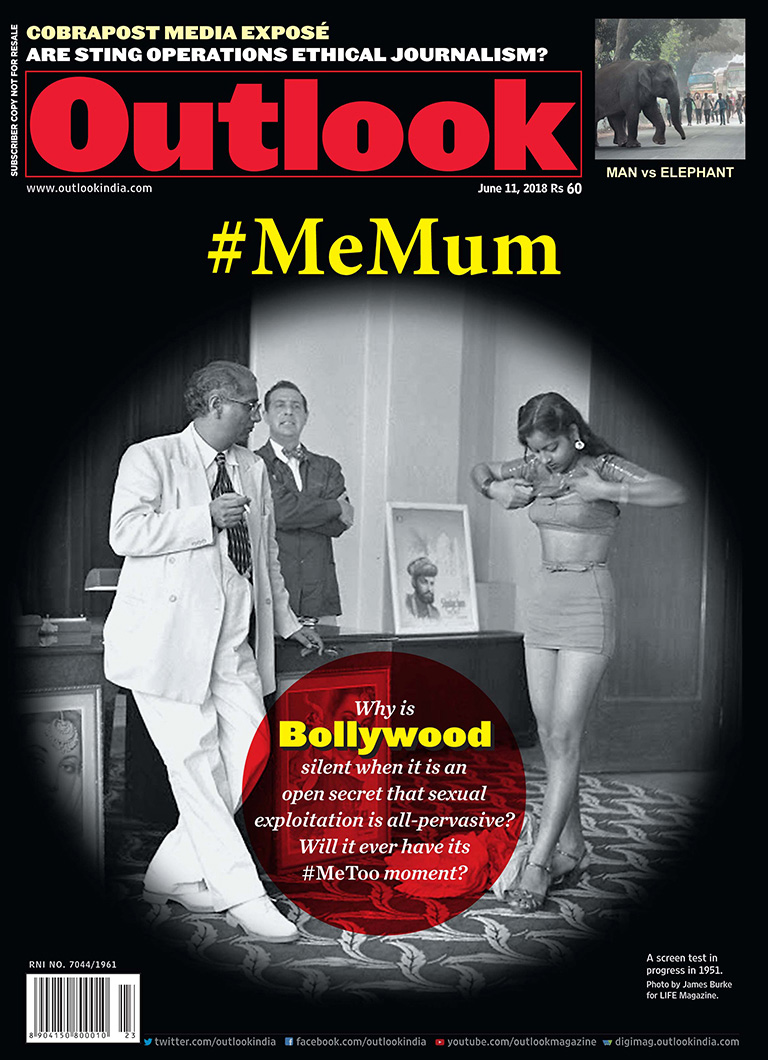 Now, less than four months after Outlook ran a cover story #MeMum (June 11), questioning the  silence of faceless victims of casting couch and other forms of sexual harassment in the world’s largest film industry, a major controversy has rocked Bollywood, which is being seen as a beginning of a movement towards addressing  the issue.

Tanushree Dutta, a former beauty queen-turned-actress, recently accused veteran actor Nana Patekar of sexual harassment on the sets of their movie, Horn ‘OK’ Pleassss way back in 2008 while they were shooting for a song sequence. Tanushree, the 2004 Miss India-Universe pageant winner who made her movie debut opposite Emraan Hashmi in 2005-hit Aashiq Banaya Aapne, in fact, had reiterated what she had already spoken about ten years ago.

In a television interview on her return to Mumbai from the US, where she has been living for the past few years, Tanushree said “people constantly ask why a #MeToo movement is not happening in India. It won’t happen unless and until you’ll acknowledge what happened with me in 2008.” Tanushree, now 34, said that the #MeToo movement may have happened in Hollywood in the last one year or two but it had happened in India many years ago. “I was probably one of the first people in the history of this country to speak up and stand up,” she added. “Everybody saw what happened but there was not one word of condemnation from anybody in the industry.”

Tanushree apparently referred to the controversy on the sets of Horn ‘OK’ Pleassss which had forced her to walk out of the film. At the time, she had accu­sed Patekar of harassment and intimidation, as also of having masterminded a mob attack on her car allegedly by the Maharashtra Navnirman Sena (MNS) supporters. Later, she had lodged a complaint against the veteran actor with the Cine and Television Artistes Association (CINTAA) but nothing came out of it. After a couple of years, she left the industry on a bitter note.

Now, on her return, she wants to fight for justice by raising her voice. After Patekar, she singled out film maker Vivek Agnihotri, claiming that he had asked her to strip merely to give a cue to another actor during the shooting of their movie, Chocolate (2005). Even as her allegations stirred a hornet’s nest, Tanushree appears to be heading for a legal battle.  Lawyers of both Patekar and Agnihotri—both of whom deny the charges—have sent separate legal notices to her. “I have been slapped with two legal notices today,” Tanushree said on October 3. “This is the price you pay for speaking out against harassment, humiliation and injustice.”

The Jamshedpur-born actress alleges that a smear campaign against her had been launched “by constructing outright lies and misinformation” on social media and other platforms. In a statement after the legal notices, she said: “The court cases can run for decades…At the end, an empty shell remains, broken hopes, a life wasted, defeated. This is the age-old saga of survivors in our nation. I walked away once from the same environment that was created for me 10 years ago. Found God, found my healing, found my peace and a new life in the USA. And now I stand to lose this new life too if I allow myself to get embroiled in the court system of India. And you wanted to know why the #MeToo movement hasn’t happened in India...This is why.” Tanushree also claims that she has been receiving threats which were aimed at preventing other victims of harassment from speaking out. “Anyone with a similar experience who comes forward should not worry about these kinds of intimidation tactics. The whole nation will support them,” she said. “It is an excellent time to take these remorseless men to task and send a strong message in the society. Harassment cases are taken lightly in our society but when given a free pass for too long, become endemic and lead to extreme cases like mine that end in mob violence.”

Tanushree’s allegations, meanwhile, appear to have split the industry. While many stars have supported her, others have chosen to skirt the issue. Some of her detractors have even questioned her motive to raise the issue ten years after the alleged incident; on the other hand, her version of what  had happened then has been corroborated by a few eyewitnesses, including a journalist, who was said to be present on the sets. CINTAA, which had received Tanushree’s complaint against Patekar in March 2008, also admitted that her chief grievance of sexual harassment was not even addressed by its panel. The association, however, said it can’t reopen her case because of its statutory provisions which bar it from taking up more than three-year-old cases.

As the controversy snowballs, the support for Tanushree appears to be growing. Actress Sri Reddy, herself a victim of alleged sexual harassment in the Telugu film industry, says Tanushree needs to be congratulated for highlighting the issue. “Nobody should question either the timing or the motive of her move,” she says. “In the #MeToo movement also, Hollywood actresses had come out to expose Weinstein many years after they were subjected to sexual harassment.” Last year, Reddy had stripped in public in Hyderabad to protest her alleged exploitation by a few powerful persons of the Telugu film industry.

Reddy says that many big stars may have a larger-than-life image on screen but they are different people in real lives. “Their on-screen persona may be different but in their real life, they consider women to be the doormats. That’s their mindset.” Even after shifting from the Telugu to Tamil film industry for want of support to her cause there, she remains hopeful that a #MeToo-like movement will one day expose all the Weinsteins of not only Bollywood but all the other film industries across the country.