Can Congress-JD(S) Clinch A Win In Karnataka?

The crucial element for the Congress in Karnataka is the ­contour of its pre-poll pact with the Janata Dal (Secular). 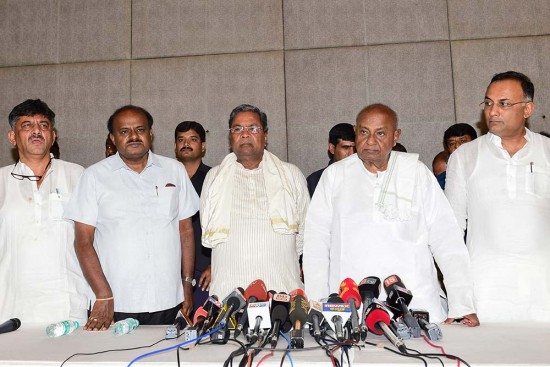 The crucial element for the Congress in Karnataka, besides getting its messaging right, is the ­contour of its pre-poll pact with the Janata Dal (Secular). In the southern Karnataka districts of Mandya, Hassan and Tumkur, the party has been ­hard-pressed to defend its decision to back a candidate of the JD(S). Can the two parties successfully pull off a transfer of votes with joint candidates, is the big question.

“At the level of bringing party workers together, there is a challenge and it will be interesting to see how they manage that,” says political commentator Sandeep Shastri. In Mandya, the Congress has to ensure its party ­workers don’t gravitate towards ­actress Sumalatha, an Independent candidate, while in Hassan, a Congress rebel is now the BJP’s nominee against joint candidate Prajwal Revanna. Besides, in Tumkur, where JD(S) sup­remo H.D. Deve Gowda is contesting, the sitting Congress MP has rebelled by filing his nomination. “The seat-sharing arrangement has created more problems than anticipated,” says political analyst A. Narayana.