Aishwarya Rai makes it to the Cannes jury. Can she help bring in the business? Updates 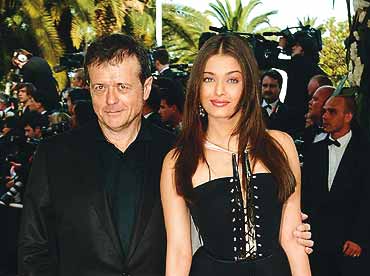 outlookindia.com
-0001-11-30T00:00:00+0553
So, our Cinderella goes to the ball. Prince Charming was missing but there were some ugly sisters. As Bollywood diva, Aishwarya Rai, traipsed down the red carpet and up the flight of stairs leading to the Grand Theatre Lumiere entrance, the nine members of the main competition jury, including Hollywood's undisputed, aging romantic comedy queen Meg Ryan, posed for a posse of persistent paparazzi. Ash was the last to arrive, nearly missed her step, in what clearly looked like an attempt to elbow her way to the centre of the assemblage, next to the jury chairman, French filmmaker Patrice Chereau. But Meg Ryan stood firm and unrelenting in the middle. This was Hollywood's night and she wouldn't let Bollywood hijack the occasion if she could help it.

She could. Devdas' Paro and L'Oreal's latest 'It Girl' gave up without a fight and settled for a place at the edge of the shutterbugs' frame, somewhere between American auteur Steven Soderbergh and Bosnian director Danis Tanovic, the winner of last year's Oscar in the Best Foreign Language film category. Caught between heavy Hollywood Traffic and a cinematic No Man's Land—that is what Bollywood still is for large chunks of the world—Ash did not have much of a chance. Thus far, no further?

Just a few hours earlier, the story appeared to be quite different. Aishwarya had commanded equal billing with Meg Ryan as the two actresses flanked the jury chairman on the dais at a special press conference held at the Cannes Film Festival Media Centre. But the bonhomie was obviously too good to last. A prophetic Tanovic joked at the press meet: "I don't agree with Patrice. I don't agree with Aishwarya. I am sure we'll have fun."

Ash still seems to be having fun. She is wont to play down the suggestion that she is here to win brownie points on behalf of India. She is out to enjoy her place in the Cannes sun. Cooes Ms Rai: "Indian cinema is already a force here. It's a great honour to be made a member of the Cannes jury. One has grown up on stories about this festival. This is an honour not just for me, but for the entire Mumbai film industry." She admits in virtually the same breath that "it's going to be a learning process" for her.

She isn't exactly everywhere, but she is a presence here all right. Strollers on the Boulevard de la Croisette, the road that all other roads in Cannes lead to for 12 days in May each year, can see Ash beaming down from an L'oreal poster. The French cosmetic giant also happens to be one of the official partners of the Cannes Film Festival. Does that explain why Aishwarya Rai is on the jury? Well, it does, but only partly.

The whole picture is provided by Christian Jeune, a senior Cannes festival official who has been traveling to India for the past few years in search of films. He asserts that Aishwarya is a known name and face in Cannes. "The response to Devdas last year was absolutely fantastic," he says, suggesting that there isn't any reason to believe that the Indian actress does not already have a fan following here and in the rest of the world.

People have been talking about London-based filmmaker Gurinder Chadha's upcoming Indianised version of Jane Austen's Pride and Prejudice and all discussions in the Cannes Film Market concerning the film revolves around the presence of Ash in the cast.

And now, a buzz has begun over the fact that The Rising, a big-budget Ketan Mehta film about India's first War of Independence, will be backed by the London-based Capitol Films. Once again, Ash is the talking point here: she has been pencilled in to play a pivotal role in the film, a fact that has been widely reported by the American and European film press covering the festival.

So is Aishwarya Rai really on the way to becoming the most luminous Indian star ever on the global showbiz scene? Perhaps.If it is not common for Indian film personalities to be on the hallowed Cannes jury, it should be even less so for an actress whose professional slate is dominated by song-and-dance extravaganzas. If Rai has made it here, it is far less for her screen work than what she stands for: a certain kind of exotic glamour that adds to the Cannes film festival's reputation for diversity.

Aishwarya is understandably excited about all the attention she is attracting. "It is wonderful to be able to expand one's horizons," she says. "Isn't that what all actors look for?" And when the opportunity comes on a stage as big as Cannes, can Ash afford to let it turn to dust?