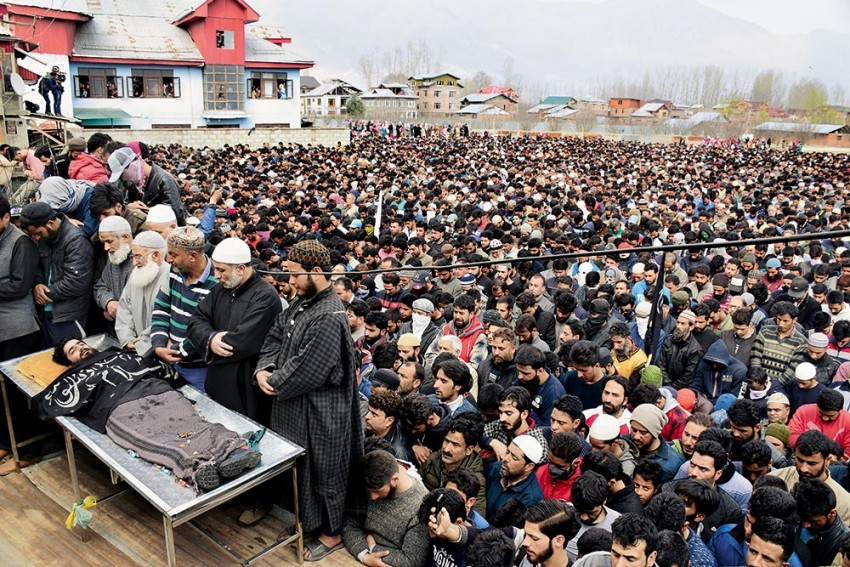 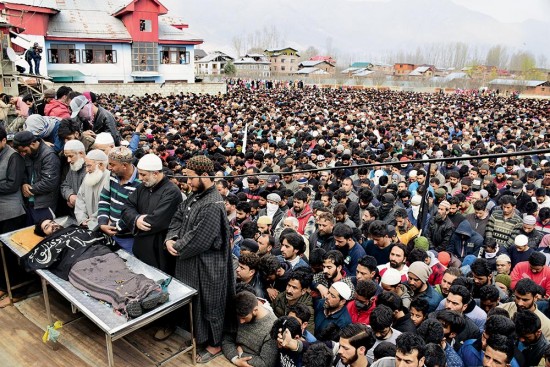 On the evening of March 11, three militants were killed during a cordon-and-search operation at a hamlet on the outski­rts of south Kashmir’s Anantnag town. Along with Eesa Fazili of Srinagar and Syed Owais Shafi of Kok­e­r­nag, the police statement referred to a militant whose identity was then ­being asc­ertained.

There was no mention, however, of the org­anisations to which the militants were affiliated. Three days later, the third militant was identified as Mohd Taufeeq, 26, from Telangana, who had allegedly been in the Valley since 2017. “We are in touch with the Telangana Police,” says IGP (Kashmir range) Swayam Prakash Pani, refusing to reveal more details. J&K DGP S.P. Vaid tweeted quoting the Telangana Police saying, “He was radicalised into the ISIS ideol­ogy through soc­ial media and went to Kashmir to participate in terrorist ­activities of ISIS.”

“In our records, all the militants belon­ged to Tehreek-ul-Mujahideen,” says DIG (South Kashmir) Amit Kumar. Eesa, 19, was the son of a school principal and had studied at Burn Hall School, Srinagar. Last August, when he went missing  from a university in Rajouri, where he was doing BTech, and joined the militants, his father, Naeem Fazili, made a passionate appeal asking him to return. On the day after the encounter, Naeem announced his son’s death on Facebook.

Nobody claimed Taufeeq’s body, though, and it was buried in Uri, near the Line of Control (LoC), where foreign militants are usually buried. Al Nasr, a news agency linked to Al Qaeda, claimed he was with Ansar-ul-Ghazwat-ul-Hind, whose Kas­hmir chapter is headed by Zakir Musa, a 24-year-old militant who parted ways with the Hizbul Mujahideen last year.

The Al Qaeda-affiliated Global Islamic Media Front had announced the founding of the group, after Musa released an audio message accusing the Pakistan government of betraying the ‘jehad’ in Kashmir, and his former associates of being “puppets of the Pakistan army”, criticising them for failing to seek the implementation of Sharia law.

The police are probing whether Taufeeq was influenced by Jund-al-Khilafah-al-Hind, part of the Jund-al-Khilafah (Soldiers of the Caliphate), an Al Qaeda-linked group based along Pakistan’s border with Afghanistan. Police sources say Ansar-ul-Ghazwat and Jund-al-Khilafah have no weapons in Kashmir, and if the militants belonged to these organisations, they might have used the Tehreek-ul-Mujahideen’s ‘infrastructure’.

“We are looking at this case from several angles. This is one of them,” says an official req­uesting anonymity, adding the police have no information on whether the slain militants were in touch with Al Qaeda affiliates. The Tehreek-ul-Mujahideen, which identifies with the Salafi stream, is part of the United Jehad Council (UJC) headed by Syed Salahuddin, the founder-chief of the Hizbul Mujahideen, and has claimed that Eesa was the outfit’s district commander in Pulwama.

In 2016, the National Investigation Agency (NIA) had arrested some youths from Kerala, Mumbai and Hyderabad as they were allegedly associated with Jund-al-Khilafah, which is responsible for sending recruits from India to Syria. With the ISIS retreating from Mosul and other former strongholds, and allegedly turning its gaze to ‘Khorasan’ (Afg­hanistan, Pakistan, India and Bang­ladesh), many in the intelligence agencies believe that some recruits from the southern states have been asked to go to the ISIS’s new battlefields, and Taufeeq might have been one of them. Taufeeq’s (right) body went unclaimed. He was buried in Uri, near the LoC, where foreign ­militants are buried. He was from Telangana.

Last year, police arrested Sandeep Kumar Sharma for alleged involvement in a series of ATM robberies and attacks on the police and the army in Kashmir. Sandeep, a resident of Muzaffarnagar in Uttar Pradesh, first came to the Valley in the summer of 2012 to work as a welder and later got in touch with Lashkar-e-Toiba. Earlier, in October 2008, Abdul Raheem and Muhammad Fayaz, both from Kerala, were killed during an enco­unter in north Kashmir’s Lolab Valley, close to the LoC. Raheem, a diploma holder in electronics, had severed ties with his family, who had no idea about his being in the Valley. The two had joined Lashkar, according to the police.

During Eesa’s funeral on March 12, in which a large number of people participated, around 20 masked youth raised slogans in support of ISIS and Musa, while waving two black flags with couplets from the Quran inscribed on them and two white flags. In a video released last year, besides mentioning alleged mass rapes by the Indian army in Kunan-Poshpora, the Pathribal ‘fake’ encounter and massacres of Rohingyas in Myanmar as the reasons that propelled him to bec­ome a militant, Eesa was heard saying, “The sole motive of our jehad should be for Islam…and not to replace one ‘taghooti’ (apostate establishment) with another.” This February, the police named Eesa among those who killed a policeman guarding separatist leader Fazal Haq Qureshi’s house. “Assassinated an element of police in firing near city of Srinagar in Kashmir,” claimed the ISIS-affiliated Amaq News Agency.

While ISIS was founded with the dec­lared goal of overthrowing “corrupt”, “apostate” regimes in the Middle East, such as those in Syria and Iraq, and rep­lace them with a “true” Islamic State, Al Qaeda considers the US to be its primary enemy and attacks its strategic or symbolic targets. For ISIS, conquest on the ground is primary; it conquers new territory and defends its strongholds. So when the militants flaunted the weapon they snatched from Qureshi’s guard, many in the police saw it as a sign of ISIS influence. Yet they insist neither ISIS nor Al Qaeda has footprints in the Valley. They say Kashmiris are not vindictive by nature, and ideologies hated across the world, such as that of ISIS, find little acceptance among them, barring a few flags and some social media presence.

The police concede, however, that Musa’s slogan of “Shariat ya Shahadat (Sharia or martyrdom)” has ignited the debate over “jehad for Islam, or jehad for freedom or merger with Pakistan”. “Kashmiri society in the past saw two kinds of guns: one for azadi, the other for Pakistan,” says a senior police official. “This time, both the guns are for jehad, but one’s appeal is political, while the other is religiously compelling. The differences will crop up soon.” Police sources say Pakistan might be keenly watching events in the Valley. “As long as ISIS or Al Qaeda-­affiliated groups are only waving flags, they are of no use to Pakistan—and if they do something, Pakistan can easily deny involvement,” says an official.

The separatists see all this as part of the conflict that has raged for nearly 30 years so far. Syed Ali Geelani, who recently named his successor as head of the Hurriyat Conference, has always held the Indian government responsible for continuous bloodshed in the Valley as it sees military might as the only way to resolve the conflict. A police official posted in south Kashmir says propaganda videos of extremist groups preaching global jehad are under watch, but the real threat on the ground continues to come from Lashkar and Hizbul—still the biggest militant groups in terms of weapons and rec­ruits—as well as a “resurgent” Jaish-e-Mohammed, founded by Pakistan-based Maulana Masood Azhar and known for its fidayeen (suicide) attacks, including one on the Uri brigade headquarters in September 2016, in which 18 personnel were killed and 22 wounded.

Jaish has pumped up its activities in the past two years, and on February 10, it carried out an attack on the Sunjuwan army base in Jammu, killing six personnel and wounding 11. Earlier, on January 1, Fardeen Khanday, a 16-year-old local, att­acked the Lethpora paramilitary camp, killing five personnel before getting killed along with another militant. In a video, Fardeen had urged Kashmiri youth and Muslims across India to join the “fight against India”, claimed that militancy is not the result of unemployment, but “a reply to Kashmir’s illegal control by India”—and then hailed Masood Azhar and Afzal Guru. “We believe Jaish will have a larger and more active role now. And that is a challenge,” says an official.

Duty And The Beasts