Runs a magazine that has set the agenda for intellectual debate, government policies for nearly 60 years 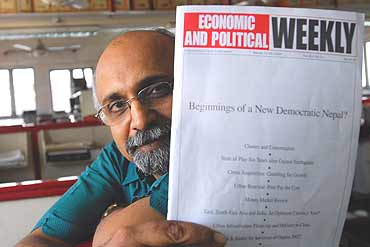 When IIM graduate C. Rammanohar Reddy was invited nearly three years ago to take a hefty pay cut and drop his job as economics editor of The Hindu to run a magazine with less than 11,000 subscribers, he grabbed the job. For, the Economic and Political Weekly is no ordinary magazine. Despite its depressingly licence-raj look, it has ruled both intellectual debate and government policy for close to 60 years. Scholars don’t feel they’ve come of age unless they have published in the EPW—peers don’t take them seriously unless they have an EPW essay or two to their name. Intellectuals across the social sciences like Amartya Sen, Jagdish Bhagwati, M.N. Srinivas and Andre Beteille have cut their academic teeth, publishing their maiden works here. The government usually reacts to most newspaper stories and editorials, but the EPW is in another bracket altogether. Its editorials go verbatim into government reports (a recent example: the Economic Survey of 2006-07 reproduced the EPW’s take on SEZs). And EPW editors and authors are routinely invited to join ministerial committees. Understaffed, underpaid, with hardly any advertisements, and dependent on its dedicated band of subscribers, the EPW carries on. As miraculously as India, some would say.