By Accident Or Design 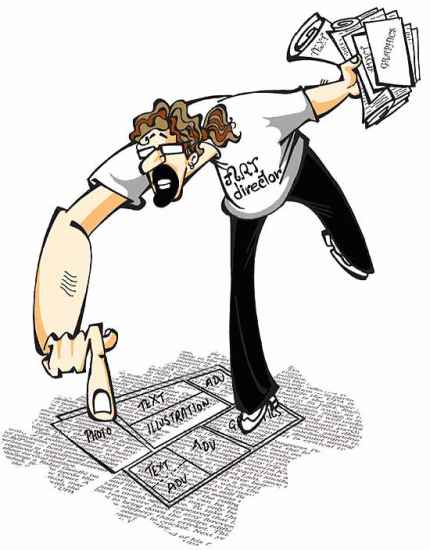 Many years ago, when my American brother-in-law was on a visit to India, he remarked that the Indian morning newspaper was a real pleasure to read. Coming from a man brought up on the New York Times, it was an unusual statement. “Indian newspapers are like Indian roads,” he clarified. “Everything happens in close proximity and in encapsulated form.” Certainly compared to the sheer volume of American newsprint, the Indian paper must have seemed the epitome of thrift and common sense, its space and margins crammed with enough material to keep every reader adrift in a minefield of ads and information. But… The shortage of newsprint had created one fatal flaw—a complete absence of design. For many years, the staff of magazines and newspapers was limited to just two types of employees: editors and printers. People wrote their stories on Remington typewriters or dictated them to a steno; then, in a noisy room filled with clanking metal, someone else set it on the page. You saw it the next morning, squeezed below the column on Lal Bahadur Shastri’s cabinet reshuffle and just above the ad for Neet Armpit Hair Removing Cream. The compressed and tightly controlled leash on ad and editorial space meant that the page designer had no place in the system. The paper was an 8-10 page morning edition, to be absorbed with a cup of tea and a glucose biscuit.  On the other hand, magazines like Reader’s Digest and Illustrated Weekly were only collected by barber shops and were usually so out-of-date that, while waiting for a haircut during the Emergency, you could read about Chou En Lai’s growing friendship with Nehru.

The change came in the ’80s and ’90s with the advent of the ‘new journalism’. Reporting became not just a dry method of recording a rape behind a police station, but a new way of touching the reader with insight and projection. Suddenly it was not just important to say things differently, but to compose them for the right pictorial effect. News magazines like India Today and Outlook took the first cautious steps to turn their readers into viewers; to enlarge and to entice with skilful layouts, play with photo sizes, fonts, line weights, white space, and all the other details that say yes, this is a magazine with a clear graphic idea.

Sadly, however, in most magazines today, graphic design has come to rely on the general Indian approach to all things visual: less is not more, less is just less; in fact, less is too little and more is not enough. Like middle-class drawing rooms, pages are filled with every form of clutter. Photos, cartoons, ads, all swirl around a text caught in a whirlpool of mixed media that screams at the reader: Look at me, aren’t I clever. Images quickly downloaded from photo banks, mutilated and touched up, are cleverly juxtaposed against contrasting—often contradictory—backdrops. The result is an amalgam, without cheer or clarity, leaving everything looking repetitive and ordinary. Political magazines look like displays for party symbols and persona; travel magazines, an excuse for aerial photography; and design journals are catalogues for lighting and furniture. In the absence of ideas, everything looks like everything else.