But The Forbidden Apple Doesn’t Taste Like An Apple!

In worshipping at the altar of big retail, and its clinical efficiency, Britons bartered away vital nodes of their local economic and cultural life 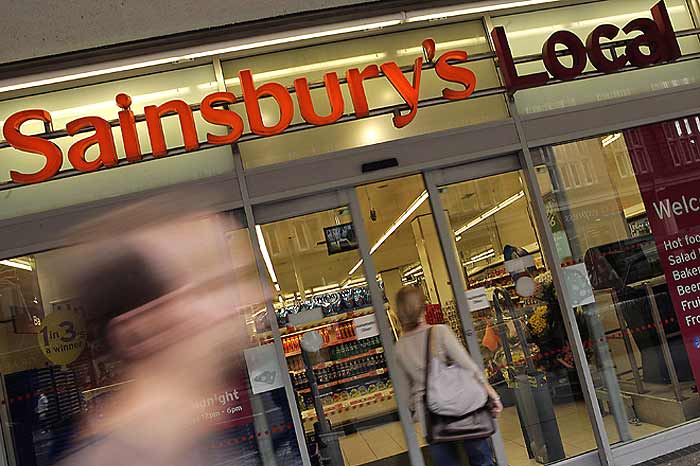 Next to the motor car, nothing has so transformed the British environment over the past 40 years than the rise of the supermarket. The retail sector in the UK is controlled by four chains, with Tesco the dominant player. Between them, they sell 76 per cent of our food. When other, smaller supermarket chains are introduced to the equation, the proportion rises to 97 per cent.

Independent retailers of food have nearly gone extinct. Butchers, fishmongers, greengrocers and independent bakeries have seen a 90 per cent decline in their numbers since the 1950s. There are fewer than 4,000 greengrocers left in the whole of Britain. The small town where I live on the fringes of London now has no independent butcher. When I moved there in the 1970s, it had six. The big chains have moved beyond foodstuff, beverages and household goods into clothing, medicines, petrol, banking, newspapers, magazines and insurance. In doing so, they have become threats to small shops and service outlets of all kinds. In many areas, the only surviving small shops are run by people of Asian origin who, as well as having strong family support structures that allow them to compete with the supermarkets’ long hours and low costs, can supply the specialised needs of minority communities. The New Economics Foundation think-tank has described the decline of the independent retailer as “something equivalent to a mass extinction in nature”.

Most British families now shop weekly—at most; and if they have sufficiently large freezers, they may do all their shopping by car in a single monthly trip. They drive to the large supermarkets, which have the widest choice, the lowest prices and the longest opening hours (in some cases, 24 hours a day). Many supermarkets are situated on the outer limits of towns and cannot be reached except by private car. This leads to an increase in traffic congestion—as does the supermarkets’ use of big lorries to transport food and other supplies from centralised distribution points—and makes private ownership of a car a virtual necessity in rural areas. 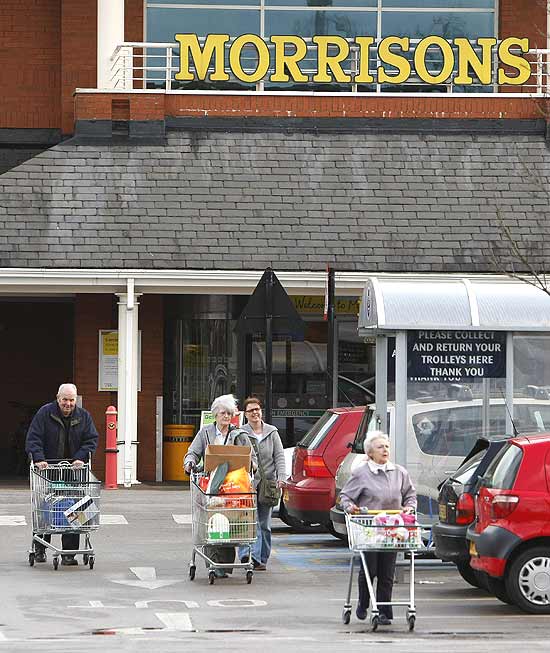 Photograph by Reuters, From Outlook, December 19, 2011

Bakeries, butchers, fishmongers and greengrocers have all but vanished from the english countryside. pubs too are part of the “mass extinction”.

The effect on town and city centres has been devastating. Many have been denuded of small shops, particularly the independent, locally owned ones, since only specialist chains—which sell pharma drugs, hardware, clothes, footwear or books, for instance—can hope to compete with supermarket prices. Non-retail local businesses suffer too: plumbers, decorators, builders, window-cleaners, accountants and lawyers lose their biggest and most reliable customers. Only in large cities, and in particular those with significant minority populations, do distinctive small shops and businesses survive. In the Midlands city of Leicester, for example, the large Hindu population supports a range of food and clothes shops and restaurants as well as suppliers of various services to the retail sector, on a mile-long stretch of roadway that reaches into the city centre. And small shops, selling distinctive food to “niche markets”, remain plentiful in the more affluent sections of London.

The English village, however, no longer has any shops at all. Milk and fresh vegetables can sometimes be bought from an annexe to the local pub, but even that quintessentially English institution, traditionally the hub of community life alongside (and often physically close to) the church, is in steep decline. For the first time in a thousand years, more than half of Britain’s villages have no pubs. And again, the supermarkets are largely to blame because they sell beer and wine at prices far lower than what the pubs can afford to match. Many suburban areas too, especially those where people on modest incomes live in post-Second World War housing, have become “food deserts”, where no food of any sort, and certainly not fresh meat and vegetables, can be bought within reasonable walking distance.

Small producers suffer almost as much as small retailers do. Unless they can sell to at least one of the big chains, they are likely to face ruination. The supermarkets ruthlessly use their power to drive down prices and dictate what is produced. Inevitably, they favour the big “agribusinesses”. The independent farmer has all but vanished from the British countryside just as the independent retailer has disappeared from the high street.

What attracts consumers to the supermarkets is obvious: the prices, the convenience, the range of choice and the guaranteed standards. Older generations of Britons remember the shops of the 1950s, where the service was surly, the choice limited, the hygiene unreliable and the food far from fresh. But some of what supermarkets offer is illusory. It is possible, for instance, to buy almost any fruit or vegetable you care to name at any time of the year. But, to take just one example, though England has one of the best apple-growing climates in the world, and once produced several hundred different varieties of the fruit, the majority of apples now sold here come from overseas, sometimes from as far away as the US or New Zealand. Numerous varieties of the English apple have disappeared because supermarkets choose only those that look good and can be transported without bruising. A handful of rather bland and oversweet varieties dominate the market. As one critic observed, it is a miracle of modernity that it provides an infinite choice of foods from across the world, but nothing that actually tastes like an apple.

The same can be said of other supermarket foods: produced for a mass market, they often look better than they taste. Nor are the price advantages entirely straightforward. Because supermarkets have flooded the market with “ready meals”, which require nothing more than a few minutes of heating in a microwave, millions of younger Britons no longer know how to cook from scratch using raw ingredients or even how to make a salad. They, therefore, pay for pre-packed meals a price many times greater than they would pay if they prepared the food themselves.

Supermarkets have also changed the shopping experience in another, more profound sense. They have removed the small, casual, but sometimes highly meaningful, human encounters—which may occur in shops or on the way to them—that help bind a community together. According to a US study, the opening of a big supermarket is followed by a decline in the numbers taking part in campaigns, church services, charitable activities and even voting turnouts. Tesco, asda (a Walmart subsidiary) and other chains have reduced shopping to a matter of speed and price comparison. Even the most rudimentary of human contact is reduced by the advent of self-service checkout counters.

Public opposition to the dominance of supermarkets—“Tescoisation”, it is sometimes called—has grown in recent years. The very few communities that still have thriving local shopping centres, free of significant supermarket competitors, fight hard against plans for a new retail giant. In one area, there were even riots this year against a Tesco opening. But the big four have become too rich and powerful and no government dares confront them or levy new taxes to discourage them. Local authorities find that supermarkets can circumvent planning controls, sometimes by buying land and leaving it derelict for a time before they apply for building permission, sometimes by bribing councils (and, indirectly, taxpayers) by offering to pay for new sports centres or roads.

The clinching argument offered by retail chains has always been that they provide what the consumer wants. And, in a sense, they do. But what people want as consumers may not be what they want as producers, business owners, parents, motorists, pedestrians or, above all, as citizens.

(The author is former editor of the Independent on Sunday and New Statesman, and a columnist with New Statesman and the Guardian).