But Steel Shall Not Be Sullied 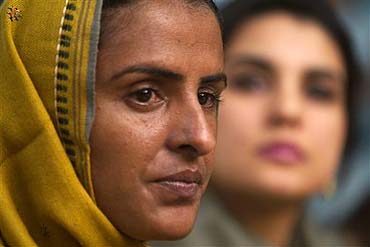 In The Name Of Honor: A Memoir
By Mukhtar Mai By Marie Therese Cuny
Atria/Simon & Schuster Pages: 192; Rs: 795
"I, Mukhtaran Bibi, eldest daughter of my father Gulam Farid Jat, lose all consciousness of myself, but I will never forget the faces of those animals. For them, a woman is simply an object of possession, honor, or revenge. They marry or rape them according to their conception of tribal pride. They know...a woman humiliated in that way has no other recourse except suicide. They don’t even need to use their weapons. Rape kills her...(it) is the ultimate weapon: it shames the other clan forever."

This is how Mukhtar Mai, one of the heroic women of our times, speaks of being gang-raped, as per the order of the Jirga—a Mastoi tribal council in Meerwala, Punjab, Pakistan, in 2002. In the Name of Honor is an extraordinary chronicle of the courage and vision of an ordinary Gurjar peasant woman in Pakistan, unwilling to be broken by injustice, or limited by circumstances. Her struggle politicised her personally, galvanised her country, and has become a source of inspiration for women the world over.

Mukhtar’s young, 12-year-old brother was wrongly accused of an illicit relationship with a woman twice his age of the higher caste—Mastoi community. To free him from police custody and to appease the Mastois, she was chosen to negotiate. "The others are too young to do this. Your husband has granted you a divorce, you have no children, you teach the Koran. You’re a respectable woman!"

Having been told this, she sets out with "a kind of childlike trust". She says, "I have committed no crime.... Although my mission is a dangerous one, I am confident. I set out clasping the Koran to my breast." But her plea with the Jirga was only met with premeditated brutality. The whole village witnessed her being dragged into a barn to be gang-raped.

She was disgraced and shamed, driven almost to suicide. But she emerged from the edge of despair with anger, a determination to fight, but did not succumb. Women will empathise and identify with Mukhtar. Contrary to public opinion, rape isn’t the result of lust. Most often it’s the exercise of power where a woman’s body is traded for "honour" in a patriarchal universe. It’s a tool of reprisal for a dispute. Mukhtar says: "Even worse, certain women are raped to settle financial scores, or simply because of jealousy between two neighbours."

There were remarkable local voices of support and sanity in the midst of this brute force. The local maulvi publicly proclaimed that what had been done was a sin. One report in the local press made the story public. The news spread in Pakistan and outside, forcing acknowledgement by the legal system, bringing support from activists, friendships with women, and as her remarkable struggle continued, awards and recognition from around the world.

Mukhtar filed a case. The first judgement delivered by the court convicted six rapists to death. In appeal, the convicted were acquitted by the high court. Now the case lies with the Supreme Court. The government has denied a passport, persecuted and oppressed her. However, it awarded her a large sum of money as compensation.

International recognition, awards and travel, however, have not taken away Mukhtar’s basic identity and love for her country. She says, "In a way I’ve become the public face of a story that concerns thousands of Pakistani women."

Her story is similar to that of many others. In India, Bhanwari’s fightback against gangrape in Rajasthan in the late ’80s brought women together in what became a statewide movement against violence on women. Her personal courage and perseverance changed public perception of sexual violence in the state. In her case, it was a reprisal planned and executed to avenge her attempts to stop child marriage.

What’s made Bhanwari and Mukhtar icons is their determination to go beyond themselves to look at problems of women around them. Crippled by her own lack of literacy, and how she was taken advantage of in the course of her legal battles, Mukhtar felt that one way she could help the girls of Meerwala was by setting up a school. This school has now become a focus not merely of literacy, but a symbol of women’s determination to fight against injustice.

Mukhtar spoke in her native Saraiki. Her friend, the scribe Marie-Therese Cuny, has preserved Mukhtar’s stark idiom with sensitivity, so has Linda Coverdale’s translation into English.

It has been an honour to make acquaintance with Mukhtar Mai.

(Aruna Roy is the co-founder of the Mazdoor Kisan Shakti Sangathan.)