But Does It Catch Mice?

It hasn't been long or distinguished enough to be called the Karat era. A mid-term review. 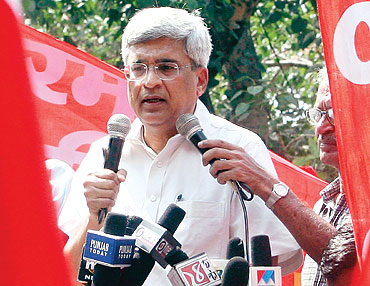 In the three years since its 18th party congress in Delhi, the CPI(M)'s has been anything but a pretty picture. 'Hardliner' chief minister V.S. Achuthanandan and 'reformer' colleague Pinarayi Vijayan have fought a bitter battle over turf and ideology in the tranquil backwaters of Kerala. Vivid TV images have captured the local peasantry fleeing the brutality of state machinery and CPI(M) cadres in Nandigram. Presiding over all this has been a grim-faced Prakash Karat holding the UPA regime to ransom on the Indo-US nuclear deal.

"For the first time," says a civil servant from a Left-ruled state, "the Left's been subjected to scrutiny and found wanting by the mainline media. Everyone wants to know: does the Left today have a coherent worldview?" Senior Congress leader Salman Khursheed is kinder. "The Left's behaviour has been a bit of a mystery," he says. "Of course till the Surjeet-Jyoti Basu era, there was contact at various levels between the Congress and the Left. Left-leaning Congress leaders like Bhuvanesh Chaturvedi and journalists like Nikhil Chakravarty acted as mediators and interlocutors. They ensured that things never reached a point of confrontation." Today, he stresses, "while many in the Left understand the Congress perfectly, no one in the Congress understands them. Cut-and-dried marketplace negotiations aren't the best replacement for the emotional interdependence of the past." Sources close to Manmohan Singh let on that an upset PM has been known to say the Left's behaviour has "strengthened" the BJP, "weakened" the Congress and the Left.

Is it then accurate to say that the new-age leadership which took over in April 2005—when Karat replaced the long-serving H.K.S. Surjeet as the party's general secretary—has failed to deliver? That it has neither been able to manage the contradictions within the party nor been able to maintain a cordial relationship with the UPA government?

No, say CPI(M) leaders. This view neither factors in post-liberalisation changes nor looks at the difficulties of state governments "working within a capitalist framework". The constant comparison between a "flexible, accommodating" Surjeet and an "unsmiling, rigid" Karat, they think, is "unfair to both".

"We have lost the glamour of the revolutionary," says party MP Mohammed Salim. "The Left was meant to be on the fringes, not making meaningful interventions at the Centre on issues such as the Indo-US deal. That has made us the target of the establishment." Adds central committee (CC) member Nilotpal Basu, "We certainly made mistakes in Nandigram; it was a political and administrative failure. But the viciousness of the media attack, the suggestion that we should not pursue industrialisation are indicative of the success we have had in establishing a distinct identity."

In the CPI(M)'s own assessment, its record under Karat is not that bad. Its powerful CC, which met recently, felt the party had succeeded in most of the tasks it had set out for itself. It was able to play an independent role, projecting alternative pro-poor policies while slowing, if not reversing, the government's "neo-liberal agenda"; rob the BJP of its opposition tag as the latter "pushed a motivated communal agenda rather than taking up people's issues"; and finally win decisively in West Bengal, Kerala and Tripura. Says Karat, "People said our national political line would affect us adversely, but we fought neo-liberal politics, supported a secular government at the Centre and secured decisive victories against the Congress."

Insofar as the CPI(M)'s aim was to carve out a distinct identity, it has succeeded. Some Left leaders say that Karat's stern public persona sends out exactly the sort of uncompromising message they want to project.

But the party did fail to contain the infighting in Kerala and the PR disaster in Nandigram. And though it succeeded in mobilising majority support against the Indo-US deal in Parliament, it failed to explain its reasons cogently to the middle class, just as it has been unable to explain the gap between its industrial policies in West Bengal and its line in Delhi. How much of it was Karat's fault? 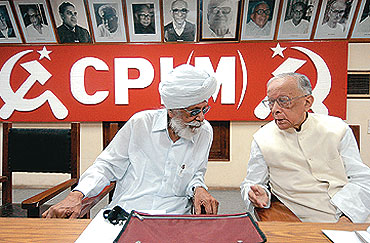 Karat's dilemma: A comparison with the old-timers doesn't factor in new realities

The jury is still out on whether the Achuthanandan-Pinarayi quarrel could have been sorted out before both were temporarily expelled from the CC. But party insiders explain the difficulties. "When you think of leaders like Jyoti Basu or Surjeet," says one, "you are looking at them after a lifetime of experience, experience that also gave them greater authority. In Kerala, both Achuthanandan and Pinarayi are mass leaders. Karat couldn't risk action against either as the section loyal to that leader might have walked out of the party. The ideological component of the battle between the two leaders is still being resolved."

On Nandigram, there's been a public admission of failure, with some Left leaders talking of the "arrogance of power". Left Front parties like the cpi, the Revolutionary Socialist Party and the Forward Bloc say it could have been averted had the CPI(M) heeded them. The earlier process of consultation, they say, has all but vanished. An rsp leader says, "After the Left Front's decisive 2006 win in Bengal, differences that were earlier sorted out in Front forums are now aired publicly. Smaller parties are ignored."

Besides, the party is grappling with how to push forward its industrialisation agenda without negating the gains it has made in the agrarian field. The death of senior CPI(M) leader Anil Biswas who "managed" the party and front in the state, and the shrinking role of Jyoti Basu have also added to the problems.

And at the centre? Says Srikant Jena, Union parliamentary affairs minister in the UF government, "Prakash has done well, carving out a distinct image for the CPI(M) while dealing with the UPA, far more than Surjeet was able to do when he was dealing with the UF. From the UF's point of view, Surjeet's role was positive; from the UPA's, Prakash's role has been difficult." But senior Left leaders call this a simplistic reading. They say that while the CPI(M) played a major role in the creation of the UF and Surjeet was "consulted" on major cabinet decisions, with the UPA, "it is not so". Also, in the Surjeet era, the new economic policy had not taken root, nor was such a major shift in foreign policy visible.

Has Karat's takeover then affected the CPI(M)'s style of "collective leadership"? Surjeet, of course, was more sociable peasant leader than revolutionary thinker and enjoyed an excellent rapport with the Congress and its coalition partners. By contrast, the quiet charm of the cerebral Karat is overshadowed by his hardline image.

Three years back, the Congress had hoped that the change in leadership would mean more a change of style than of substance. PMO sources had then id, "Dr Singh finds it easy dealing with Karat, whom he sees as straightforward. Karat never minces his words, the PM knows where he stands with him." But the fact is, new-age leaders like Karat are fundamentally more suspicious of the Congress than their seniors were. The Congress too faltered. Says a CPI(M) leader, "The UPA wasted two years thinking it could deal with us through a high-profile editor. The CPI(M) doesn't work through personal friendships."

So, as the party readies itself for its 19th party congress in Coimbatore (March 29 to April 3) to analyse why it is not growing outside its three bastions despite a 13 per cent growth in party membership in three years, it is working on a document on the contribution of the Indian Communists to the Marxist experience. "It is a unique experience," says CPI(M) MP Hannan Mollah. "Nowhere else in the world are Left governments working within an adverse system."