Amid unrest, pandemic and internet shutdowns, it’s hard times for the economy of the former state. Entrepreneurship and livelihood are taking the brunt. 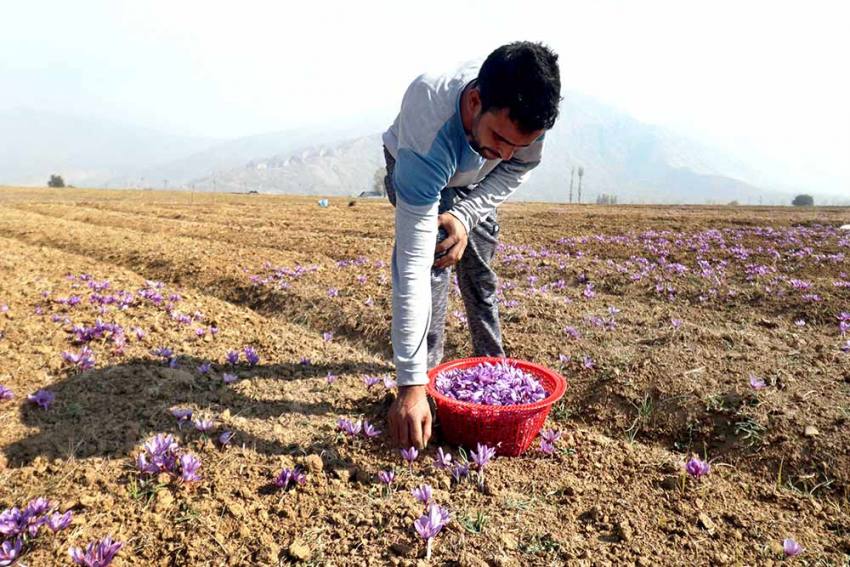 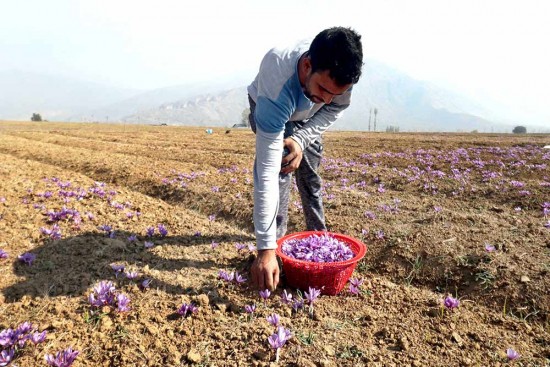 On January 11, 2018, when the then finance minister of undivided Jammu and ­Kashmir, Haseeb A. Drabu, presented the annual budget, little did anyone realise that it would be the last one for the state. One of the key highlights was a focus on logistics. “The big idea,” he said, “is to move the economy to a frontier of lower logistics costs. The only way to reduce transactional and inventory management costs, which are hurting our businesses, is to bring down the logistics costs to sub 10 per cent levels.” The figure of 25-30 per cent for the state was unusually high.

According to RBI data, the state’s growth rate fluctuated between a negative 3.2 per cent and 17.7 per cent in the past few years. The economy reached a stage where industry and livelihoods either collapsed or were on the verge of it.

Since August 2019, when Article 370 was abrogated and the state was ­divided into two Union territories, the region incurred an estimated loss of Rs 40,000 crore, as per preliminary figures provided by the Kashmir Chamber of Commerce and Industry (KCCI). “We shouldn’t be treated like any other state,” says Sheikh Ashiq of KCCI. “We are different, and we jump from one lockdown to another. This cripples our economy.” He complains that the Centre has turned a blind eye to the plight of local traders.

Before the abrogation, J&K’s ­economy was driven by the service sector (56 per cent of the state GDP), followed by industry (28 per cent) and agriculture (16 per cent). Tourism accounts for 7 per cent.

According to the government’s ­response to a Lok Sabha query in December 2019, the number of tourists slumped from 154,000 in 2014 (August to November) to 36,105, a fall of 75 per cent. “August to November is peak season,” says Bashir Khan (name changed), a houseboat owner in Srinagar. “Last year, there were ­problems due to the abrogation and the security lockdown. This year, it was Covid. I sold the houseboat and resort, and took up a job to ensure food for the family.” 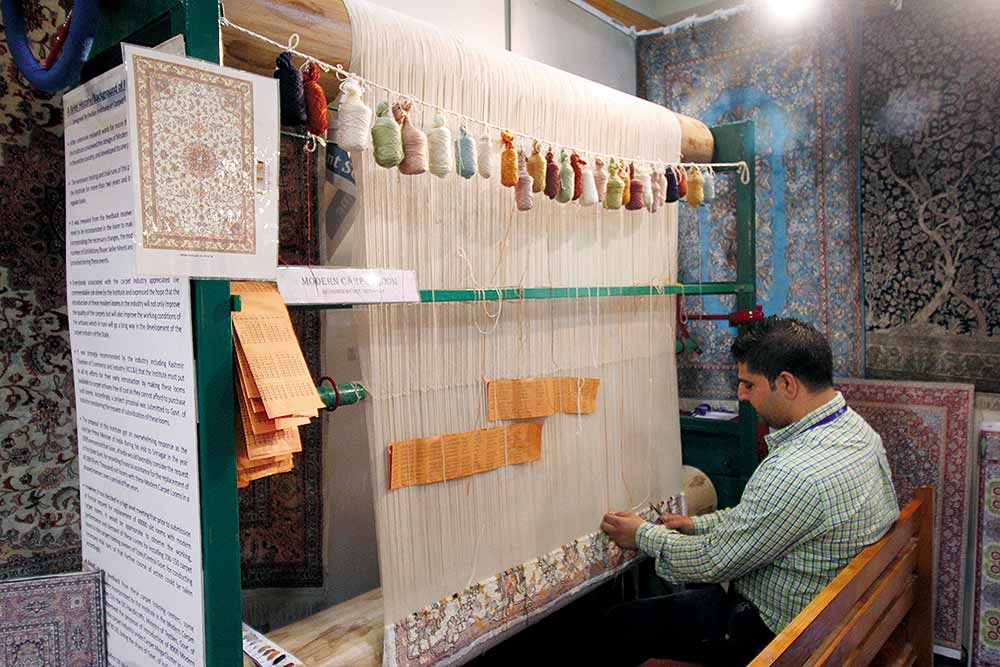 Silence of the Looms

The Kashmiri carpet industry too has been hit by the lockdowns

Others lament that the apple season, which could have helped, was wasted due to warnings from militants in the climate of unrest. “We had to sell the fruit at throwaway prices,” says Khan, adding that savings are being drained out. Although the Centre bought ­apples worth Rs 8,000 crore, it was too late. The fruit ­suffered heavy losses, and trees were damaged as growers were unable to get timely weather updates on snowfall due to the communication shutdown.

The prolonged lockdowns for ­various reasons also impacted the handicraft and carpet segments. “Orders from the US and Europe are primarily for Christmas, which we couldn’t cater to,” says Mubeen Din, an exporter. He adds that several ­traders left the business.

J&K’s startup story, which got a boost after the 2018 startup policy, is also dying a premature death. “In the era of 4G, a startup cannot survive amidst internet shutdowns and 2G speeds,” says Amrik Singh (name changed), whose agri-logistic startup closed last year. “I went to several ­investors and venture capitalists, but everyone declined due to the ­uncertainty. Around 50 graduates whom I employed lost their jobs, and

I had to join an IT firm in Gurgaon.” According to Internet Shutdown Tracker, J&K had 184 internet shutdowns between 2012 and end-2019. 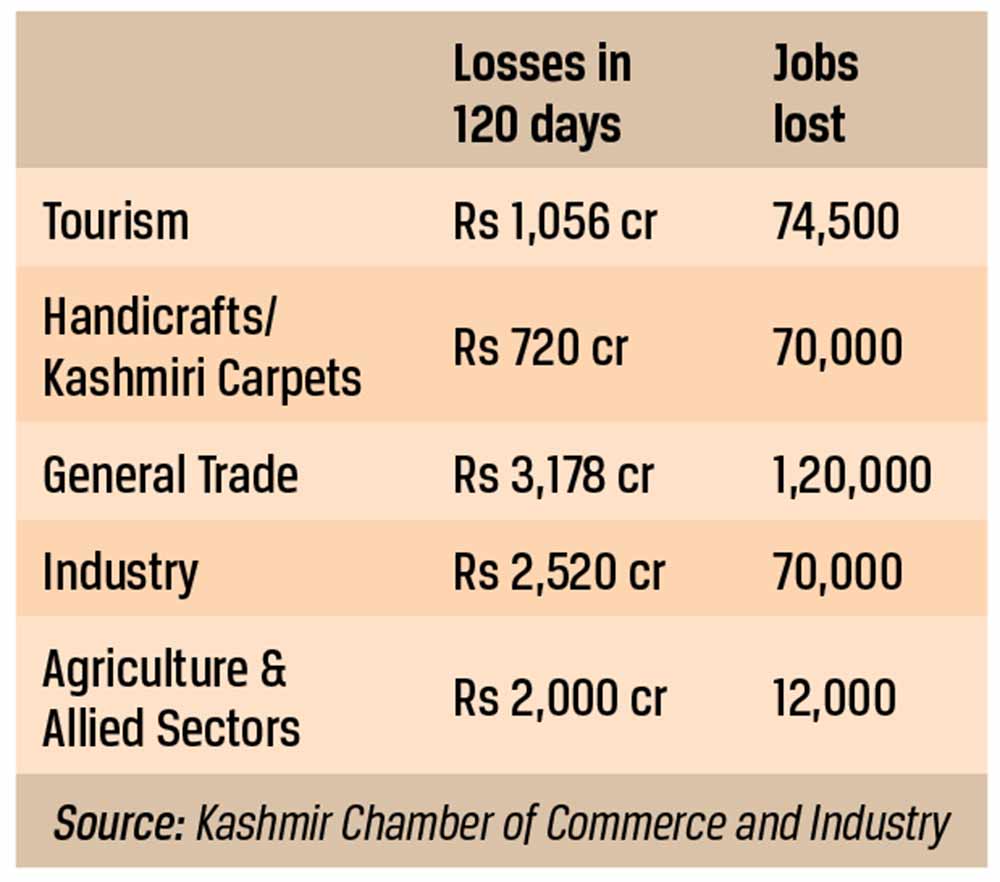 A week before the countrywide COVID-19 lockdown was announced in March, a delegation from KCCI met Union finance minister Nirmala Sitharaman. Nothing has happened since then. “We are ready to rebuild and are waiting for the Centre to come forward to help us,” says Ashiq.

KICCI’s major demands include a ­revival package for the industries that were declared non-performing assets (NPAs) since 2008, and a standardised one-time settlement policy for a 50 per cent relief in principal amounts of the NPAs. Manufacturers want the ­inclusion of handicraft-related ­artisans in the Mudra scheme with five-year loans, and the maximum limit raised from Rs 1 lakh to Rs 2 lakh. They also demand a reduction in GST on shawls from 12 per cent to 5 per cent, the sops under the present industrial policy to be extended by 15 years, and waiver of of penalties on tax defaults. “The GST division among the newly formed territories is yet to be worked out,” says a government ­official who didn’t wish to be identified. “Both J&K and Ladakh require funds for development, but who will win the deal is yet to be seen.”

For the erstwhile government of the undivided state, GST was the largest component (63 per cent) of the annual tax revenue, amounting to Rs 7,000 crore. With abrogation and bifurcation, the distribution of revenue is likely to pose several problems.

Autonomy For Chief Ministers? Congress Taking Small Steps For Course Correction, But Are They Enough?