Time’s Filter: Made For Each Other

They are the faces that launch a thousand products. Some are famous now; some are forever touched by the magic of old ads. 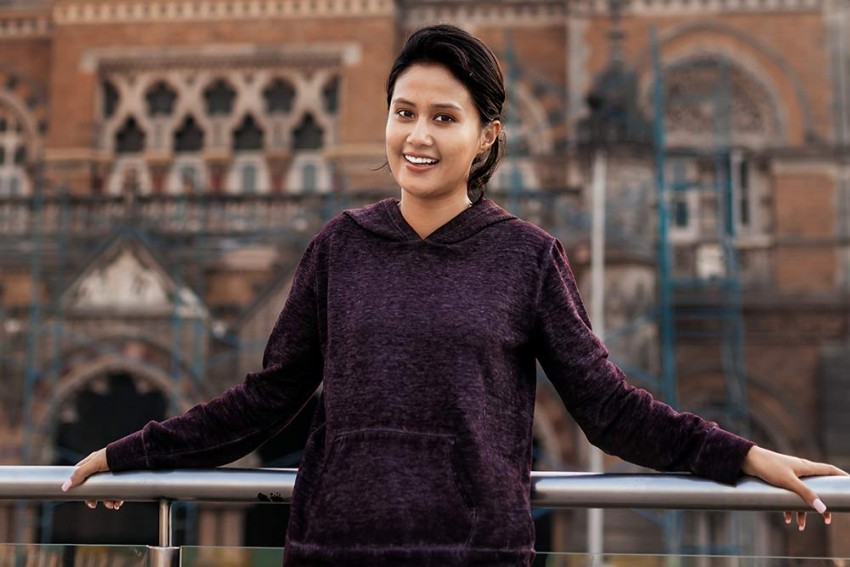 The ubiquitous Sasha Chettri, face of Airtel
Photograph by Apoorva Salkade
Arshia Dhar March 19, 2019 00:00 IST Time’s Filter: Made For Each Other 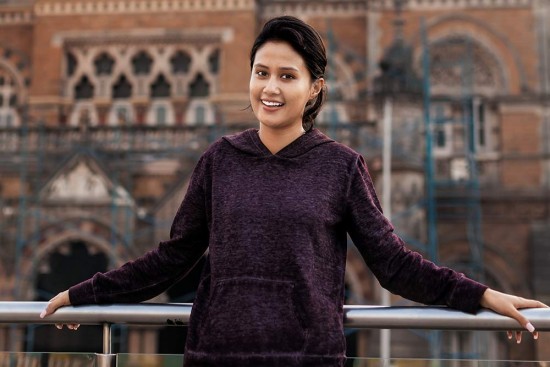 The day truly dawns, for most of us, with a steaming cuppa and a newspaper that traditionally complements it; for some, the morning television bulletins work just fine; for millennials, a scroll through their social media feeds is mandatory. But, along with the freshly minted news, there are ubiquitous faces—some fresh, some worn well, others the visual equivalent of the tiredest of clichés—asking you to subscribe to a telecom service, buy a deo, or use an app to book hotels, their cheery smiles enticing you at every turn of a morning paper? Most aren’t well-known actors, sportspersons, or TV stars. Yet, they have accompanied you through every stage of your life: from television commercials and YouTube shorts, to larger-than-life billboards towering over every road across the country. Like the bespectacled eyes of Dr Eckleberg looking down from a billboard on the road that ran between West Egg and Manhattan in The Great Gatsby, one cannot ignore their gaze; they have a curious way of lodging themselves in your head. The owners of those faces are celebrities too, people who occasionally exasperate with their omnipresence, but often conquer the viral spheres of advertising.

Take Sasha Chettri, better known as the ‘Airtel 4G girl’, a face that has colonised Indian ad spaces in the last four years. For Chettri, previously a brand strategist at a Mumbai-based production company, life changed dramatically almost overnight. For the 26-year-old from Dehradun, whose face launched a thousand ads for Airtel 4G, it seems like a “fairytale”. “I had a fairly normal life before Airtel. I have worked for agencies, non-profits, production houses, and I used to moonlight as a musician on week­ends,” Sasha says. Then, one day, a call from her friend, informing her about auditions at Airtel set the wheels in motion. From feeling like a misfit initially on the sets, Sasha is now pursuing a full-time career in not just acting, but in music too. “I am shooting for a Telugu film now and working on my music. It’s unreal!” she quips. But the fairytale comes with its share of poisoned apples and tricky snares. With social-media visibility comes the dangers of greater trolling, and the Airtel girl has had her share of it. “While many connect with that happy persona of mine, there’s a disconnect, where people ask. ‘Yeh hai kaun? Yeh itni khush kyun hai?’ (Who’s she? Why is she happy?) But that’s just a character that I portray. However, I understand it, because if I had to see myself so many times on TV even I would feel that way,” Sasha says. She also warns millenials of the emotional costs of high rec­og­nit­ion. “There were days I haven’t gone out beca­use I was scared of the attention. I had to cha­­nge my look...I have no respite; I am everywhere!” 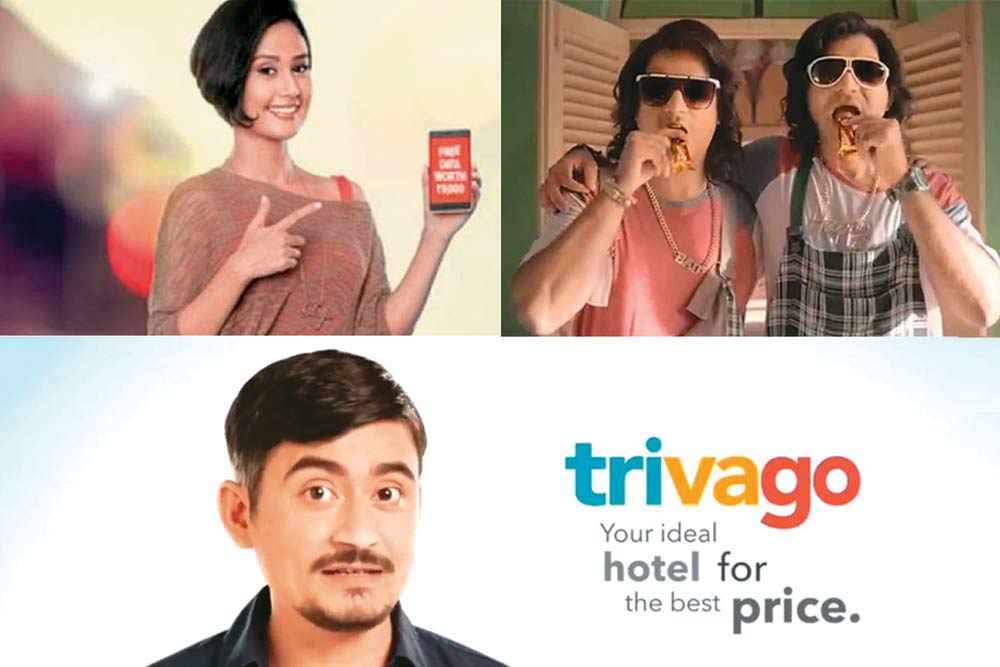 Indian advertising had its watershed moment when in the 1970s, Alyque Padamsee launched Liril soap with his iconic advertisement, starring the ‘Liril girl’, Karen Lunel. Clad in an emerald green swimsuit, frolicking under a crystal blue waterfall and smiling through the cascade of water crashing on her, Karen’s ‘Liril girl’ may be construed as the image of the perfect male fantasy, but the ad, on the contrary, was said to have been a reflection of what women really wished for, that too while taking a shower, away from mundane drudgeries into a world of make-believe fun. “I always got positive reactions and I enjoyed being the face of the product. The ad was ahead of its time,” Lunel, now a school teacher in New Zealand, tells Outlook. The ad catapulted the 20-year-old to stardom, turning her into one of the most recognisable faces in India. Before she joined Air India later as an air-hostess, Lunel continued to shoot for the ads regularly, from 1975 to 1983. “It was definitely challenging work, getting up at a stupid o’clock, getting into a wet swimsuit in the freezing cold while shooting in Kodaikanal and Khandala and wrapping up in blankets between takes. We were determined to make the best of it...I had a blast while it lasted,” says the lady with one of the first ‘viral’ faces of Indian advertising. 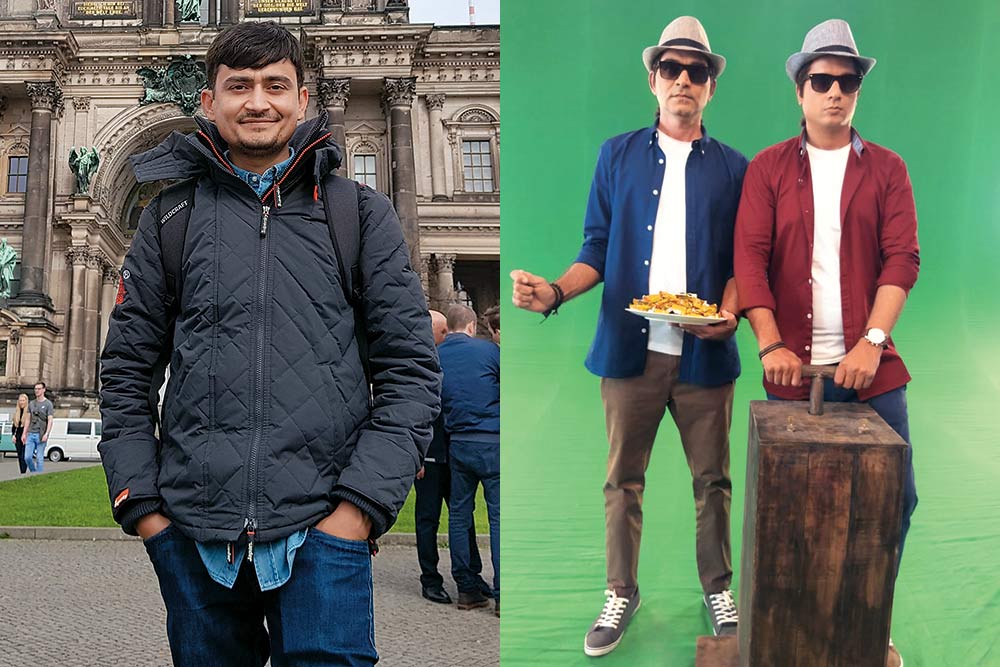 “Nobody counts the number of ads you run; they just remember the impression you make,” William Bernbach, legendary adman famously said. But, in the age of high-speed internet, the multiple mediums one is exposed to may consequently multiply the frequency at which a person meets the unfamiliar-yet-ubiquitous faces, thereby making people wonder who they are, or why they claim so much mindspace. Trivago’s Abhinav Kumar may very well be able to explain this phenomenon. “I was the country developer for the Indian market at Trivago for over five years. Last year we were casting for an actor for our ads...the head of brand marketing suggested that I give it a go,” says the puppetish and funny ‘Trivago guy’, who is from Bihar. Currently resi­ding in Dusseldorf, Germany, Kumar’s manne­red ways has been widely trolled and memed, with social-media threads asking why the brand chose an unknown face. But that’s all grist to Trivago’s mill. “It’s great to see people discussing it,” says Kumar. Certainly, he isn’t complaining about the few additional services he’s offered at Indian hotels on account of being the ‘Trivago guy’. 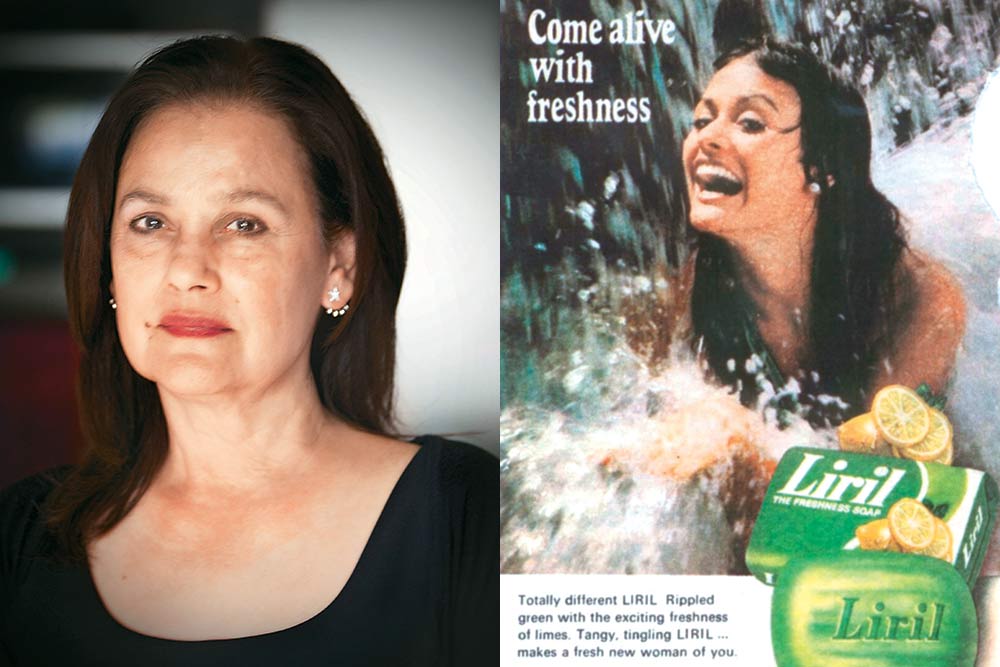 From Lalitaji demanding that you buy Surf, to the effervescent Mahashayji selling MDH, Indian hearts beat to great advertising.

From the barely smiling, mildly admonitory Lalitaji (white sari, big red bindi), asking you to buy Surf to the ever-effervescent Maha­shayji selling MDH spices, a nostalgic Indian heart beats to images of great advertising. “I still get introduced as the Onida model, even after 20 years of the campaign,” says David Whitbread, the original bi-horned devil for television brand Onida. From 1985 to 1999, Whitbread’s smoky devil act had a harmless pungency that kept the Indian audience hooked. Whitbread, now in his early 60s, is a freelance stylist and model choreographer based in Coonoor. While he was a model coordinator in Mumbai, art director Gopi Kukde approached him to play the iconic television devil. “I said no, and offered to find them a model. It took a couple of months for them to convince me. I just don’t like being in front of the camera. Once shot, I was like which client will like this! It was all about the pretty boys and girls back then,” the veteran stylist says. He was paid Rs 7,000—a princely amount then. A month-and-a-half later, he found the monster glaring back from the last page of an English daily. “I thought no one would recognise me...I never told anyone. But the press found out. I would get asked for autographs, and get pointed at in restaurants. I didn’t enjoy that bit as I am a shy person, but most of it was good fun,” Whit­bread reminisces. 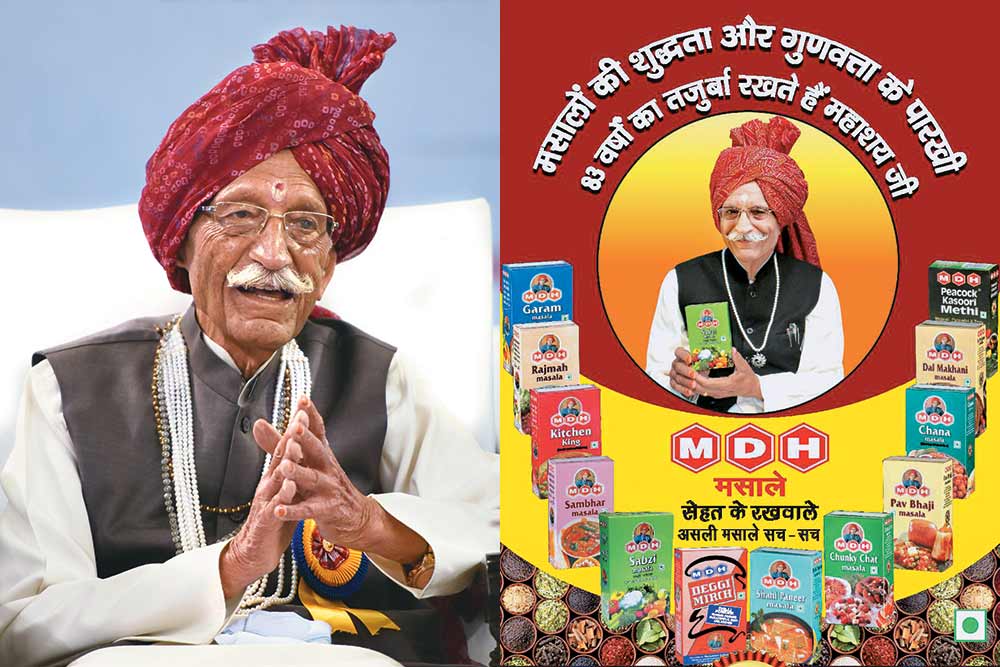 Mahashay Dharamlal Gulati of MDH and as he appeared in the distinctive masala advert.

Characters like Whitbread’s devil are once-in-a-generation phenomenon—each one handing the audience a visual shorthand that defines an era, an addition to the pop-culture lexicon, the chosen few that stand the test of time. Debuting in 2006, the now-legendary Cadbury 5-Star chocolate twins, Ramesh and Suresh, continue to occupy screen space in India after having shot over 250 ads with agency Ogilvy and Mather. “I am into writing and direction. I just want to continue doing the 5-star ads and keep travelling the world,” says Gagan Duggal, aka Suresh. Often mistaken for being twins, Duggal and sidekick Rana Pratap Sengar (aka Ramesh) have made great memories playing the goofy, stoned, forgetful mascots almost sleep-walking into hilarity. “While on our way to Romania to shoot one of the 5-Star ads, we had a layover in Doha. A guy at the airport asked us where we are headed and for what, and INS­tantly recognised us when we mentioned 5-Star. Then others and airport staff walked up to us for a photo and arranged a special jeep for us to take us to the aircraft,” Duggal laughs. For Sengar, who was spotted in the 2016 Abhay Deol-Diana Penty starrer Happy Bhaag Jayegi, life changed once the campaign took off. After being rejected twice at the auditions, an indefatigable Sengar ret­urned a third time, clothed differently and pretending to be the brother of the twice rej­ected aspirant, until he finally made the cut. “I’ve seen kids ask shopkeepers for the ‘Ramesh-Suresh wala chocolate’. Can you bel­ieve that?” Sengar says. The duo was offered the Hindi remake of Hollywood comedy Dumb and Dumber, which failed to take off. 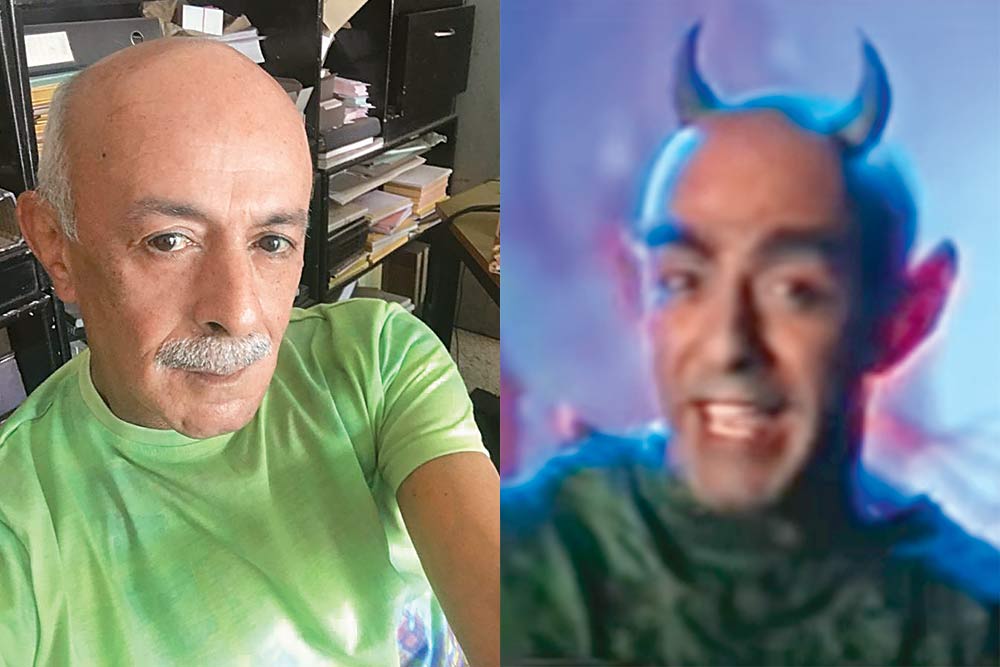 David Whitbread now, and the Onida ad that made him famous.

Characters like Onida’s devil come once in a generation, providing a visual shorthand that defines a generation.

Indeed, the success of an ad campaign is nearly impossible to predict. But for gen-Z, the ultimate test for anything ‘viral’ is its ‘meme-worthiness’, or so believes Amol Parashar, aka ‘Kunal’ from the Wild Stone deodorant ads. “We no longer live in times when only the conventional filmy hero or heroine is needed to sell a product. The definition of ‘good-looking’ is also changing. If you’re relatable, people are going to like you. People put Kunal in all kinds of memes—from political memes to Avengers memes, that guy is everywhere!” Parashar says. The IIT-Delhi alumnus has a successful web-series in his kitty as well. “The Viral Fever’s Tripling released six months before the Wild Stone ad, in 2016. I think it kind of built up from there. It’s definitely opened more avenues for me,” the actor says. 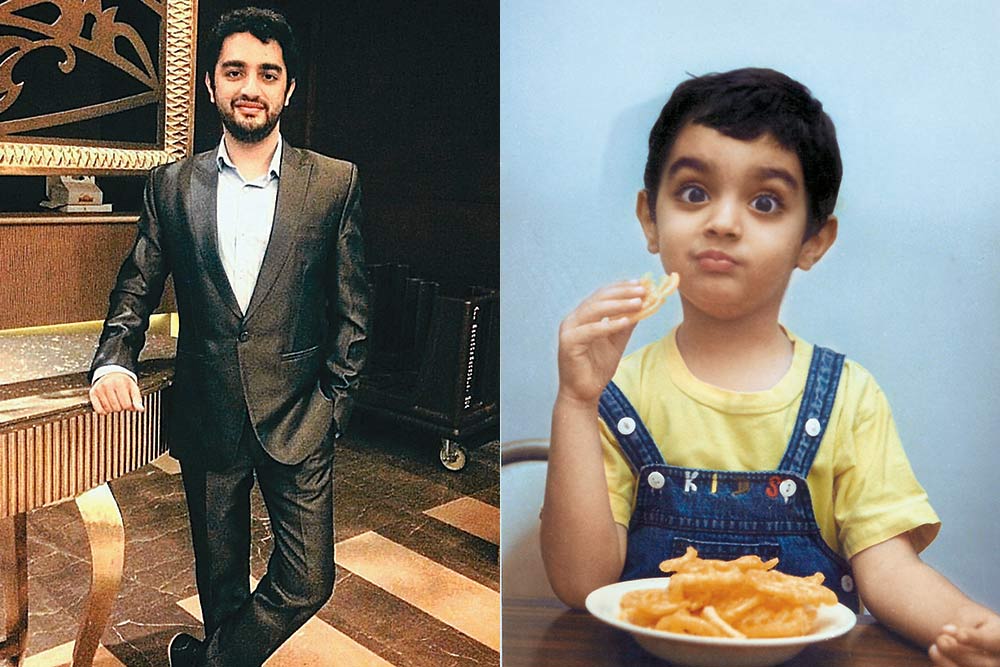 A grown-up Parzaan Dastur, and (right) as he appeared in the Dhara ad.

While some like Rajesh Khera (who replaced Whitbread for Onida) ended up being typecast and not getting many other offers, as he seemed to “remind people of only the devil”, the little boy from the ’90s Dhara ad has gone on to act in several films and TV shows. “I have vague memories from that shoot which happened when I was four. I remember going to the sets very hungry after school. They offered me jalebi there and I loved jalebi. The reactions you see in it are natural,” says Parzaan Dastur, who played the unforgettable ‘sardar kid’ in Kuch Kuch Hota Hai (1998). But his ‘jalebi boy’ act has struck the popular chord. “People still recognise me from that ad. They often are confused with the oil brand name, but that boy with a squeaky voice, saying ‘jalebi’, has lasted,” Dastur says.

As the world looks for its next viral face to squeeze every last meme out of, the mild, intoxicating whiff of nostalgia never stops clinging to the old ones. For all those characters drawn in indelible ink in our memories—some vaguely remembered, some recalled with startling acuity, all of them sodden with the fading colour tone of old Doordarshan and smudgy news-stock—are hooks that let us into another time, one that has gone forever. ‘The Zing Thing’ tastes so good in that foreign country.