Within two years, the YouTube channel has more than 16 lakh subscribers and at least 15 lakh daily viewers. It fetches a monthly revenue of 4 lakh to a group of six Tamil farmers 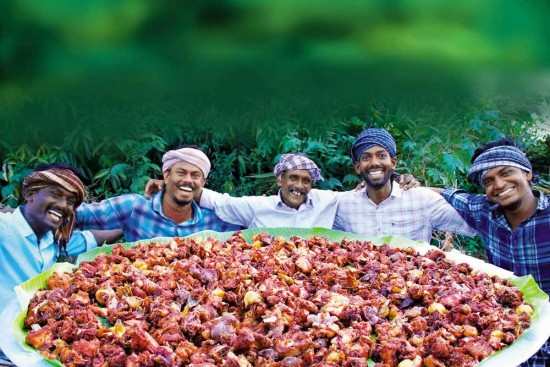 Say Chinnaveeramangalam village and people may simply purse their lips and shake their heads. But mention ‘Village Cooking Channel’ and the res­ponse will be more enthusiastic, even lip-smacking, from more than 16 lakh eager and hungry mouths to be precise. What started as a small cooking experiment in this small village near Aranthangi town in Pudukottai district of Tamil Nadu has taken the internet by storm. A group of six farmers from the village are rustling up tasty village recipes in their kitchen set amid coconut and banana plantations and rice fields under the blue skies, and cooking up a YouTube revolution.

Within two years, the YouTube channel has more than 16 lakh subscribers and at least 15 lakh viewers every day. It clocks monthly earnings of an estimated Rs 4 lakhs, which is sufficient to roll out one episode after another—once in three days and nearing 100 episodes, not counting the days when their shoot gets rained out. “After good rainfall in our district we used a traditional method of diverting water from ponds to catch freshwater fish. We cooked a local fish curry and served it to all the families in our village. I made a video of the process and uploaded it as Village Cooking Channel in March 2018. To our surprise, we had more than 20,000 views on the first day and soon the numbers swelled,” recalls Velusamy Subramanian, the team’s techie who videographs, edits and upl­oads the cooking adventure. As the channel notched up more viewers, Subramanian sold his blogger template website for a good price to inv­est in a professional camera for better video quality and fund the project.