I invited him to the Oberoi. He looked unhappy. When I asked where he'd like to go instead, he said, "Leopold Cafe!" 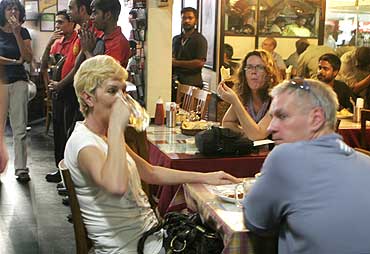 I once had a visitor from France whom I needed to impress, so I invited him to the Oberoi. He looked unhappy. When I asked where he’d like to go instead, he said, "Leopold Cafe!" Indeed, "Leo’s" is probably one of the few Indian brands that have acquired a cult following overseas, alongside Old Monk rum, Kingfisher beer and Royal Enfield bikes.

It started life in 1871 as "Leopold & Co", a pharmacy run by a Swiss chemist. Since then it’s been through avatars as a wine shop, general store and, ultimately, Irani cafe. Everyone who’s read Shantaram knows Gregory Roberts was a regular here, but not many know that this was also one of Charles Sobhraj’s haunts. (Ferhan Jehani, a member of the family that’s run the place since 1923, can probably tell you some interesting stories!)