Stunned disbelief, followed by cold fury. That was how we saw America react to Black Tuesday's dastardly plane attacks on the Pentagon building in Washington and the twin towers of the World Trade Centre in New York. 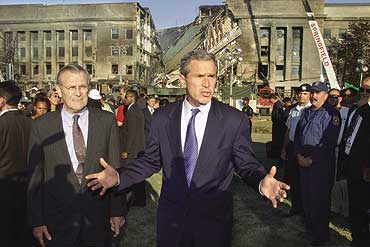 outlookindia.com
-0001-11-30T00:00:00+0553
Within the administration, it has fostered a grim determination to destroy not only those who plotted and perpetrated the attack but also those who harboured and supported them. In the American imagination, the events of September 11 recalled the attack on Pearl Harbour. It too had destroyed the myth that America would always be able to fight its wars away from its soil, in other continents. Back then, after "the day that will go down in infamy", Roosevelt had declared that "Japan fired the first shot; we shall fire the last one". In other words, when the war is over, the shooting ends on both sides.

But that was in faraway Hawaii. The terrorism that the US experienced in one of its most ugly manifestations last week is different. This time, the terrorists struck on the mainland, that too at America's two most potent symbols of power and wealth. President George W. Bush called it "the first war of the 21st century" and it may be a war that may last several years.

Administration leaders, including Secretary of State Colin Powell, former chairman of the joint chiefs of staff who planned the Gulf War against Saddam Hussein, has said that the war will go on as long as necessary. It will not end with the arrest or elimination of Osama bin Laden but extend to the Taliban, which harboured him, as well as those states which employ terrorism as a tool in international diplomacy.

Both Powell and deputy secretary of state Paul Wolfowitz have emphasised that the campaign against terrorism will be a long-term "military campaign, not a single action". "These people," said Wolfowitz, "try to hide, but they won't be able to hide forever. They think their harbours are safe, but they won't be safe forever...it is not just simply a matter of capturing people and holding them accountable, but removing the sanctuaries, removing the support systems, ending states who sponsor terrorism. The campaign is not going to stop if a few criminals are taken care of." That's good news for the Indian government.

Hitherto, when the US had talked of state-sponsored terrorism, it stopped at Saddam, Iran and Sudan. It did not mention Pakistan-sponsored terrorism against India in Kashmir and elsewhere or the Afghan mujahideen role in the Chechen rebellion. These matters were left for the diplomatic and security skills of India and Russia to handle. It is also not clear whether China will support or join the US in its operation against the Taliban.

Powell has, for the first time, said definitively that investigations thus far point to Osama bin Laden's organisation. He has also approached Pakistan President Pervez Musharraf with certain proposals to which he expects him to respond "as a friend". The US is also apparently asking Pakistan for permission to base its Special Forces on its soil to raid Afghanistan and nab bin Laden were he not handed over. Pakistan has vaguely promised "full cooperation" in the fight against terrorism but the US demand will put Musharraf in a cleft-stick—it has created the Taliban, and now any action in support of Washington could have the jehadis rally against the military regime in Islamabad.

Bush, meanwhile, has lost no time mobilising nato behind US war plans. It has invoked nato's mutual assistance clause for the first time, which will enable the US to fly over nato countries and use their ground facilities. Should Pakistan flinch, Tajikistan is reportedly ready to offer any facilities to overthrow the Taliban and restore freedom to the Afghans.

One sad and serious outcome of the attacks domestically is that many minority groups, including Sikhs, have been targeted either through hate calls or violence. This could divide America, create new pressure points for the Bush administration to handle, and undermine one of the defining principles of its society—that it's a veritable cultural melting pot.

Already, the recently-appointed President's Commission on Asian-Americans has deplored the attacks on innocent Asian-Americans. Strongly condemning the terrorist strikes, it said: "All commissioners join together to denounce reported attacks of retaliation aimed at innocent Arabs, Muslims and Asian-Americans around the country." Commissioner Zach Zachariah, a well-known Indian-American cardiologist and staunch supporter of the Republican Party, said: "The true test of our national character is seen not in the values we espouse in times of peace and security but rather in the way we act during times of crisis and danger. America has been a beacon to refugees and immigrants for over two centuries because we are a society that values tolerance as a cornerstone of democracy. It's imperative that the events of recent days make all of us reaffirm our commitment to those values of compassion."

The Indian embassy too has been quick to "deplore" the "harassment of Sikhs because of mistaken identity". The Sikhs have been targeted largely because they, like the popular image of Arabs, sport beards and wear turbans. The Sikhs, said the embassy, "are a law-abiding, peaceful and progressive community from India. They are adherents of modern, open and democratic faith". Indian ambassador Lalit Mansingh said there have been less than a dozen incidents but the embassy is taking a serious view of them. One Sikh was injured in a gurudwara when miscreants fired rubber bullets but the next day, when the same miscreants returned, one of them was arrested. New York mayor Rudy Giuliani and police commissioner Bernard Kerik, at a press conference, also deplored incidents of violence against Arab, Muslim, Indian and Pakistani-Americans.

The death and destruction over, America is getting on with life. It has begun taking stock of the tragic toll. No fixed number of casualties can be arrived at yet since it will take a week to clear the debris and recover the bodies. At the Pentagon, a preliminary count shows 126 missing. The casualties are, naturally, much higher at the World Trade Center. Till late Thursday evening, 4,763 people were missing. Five per cent of the people working in the towers, mostly financial and information technology specialists, are known to have been Indians. Extrapolating from that, it is obvious that India too has paid a heavy price for the deeds of the terrorists. The British estimate the number of Britons who may have perished in the destruction of the twin towers at about 500. The sheer heterogeneity of New York is one reason why last week's tragedy has a global resonance.

Defence secretary Donald Rumsfeld was actually working in the Pentagon when the terrorists struck. A former fighter pilot, he immediately joined the rescue squads. The Pentagon is losing no time picking the targets even as the debris is being cleared to count the dead. It is ready to carry out whatever the Commander-in-Chief, the President, orders. India hopes that the US will go after not only the terrorists but also the states which promote them.

For India, which like the US is multi-racial, multi-ethnic, multi-religious and, additionally, multi-lingual, has as big a stake as the US in this fight against terrorism.New Delhi certainly would extend whole-hearted support to the US; Indian diplomats hope the US too would assist the world's largest democracy in combating cross-border terrorism.

The Men India May Have Lost...